Tyler is periodically in the United States and available to speak to congregations as his schedule permits. Email him to extend an invitation to visit your congregation or organization.

Tyler serves in Ekwendeni, Malawi, at the invitation of the Church of Central Africa Presbyterian (CCAP), Synod of Livingstonia. He serves as a lecturer of systematic theology and church history in the Faculty of Theology at the University of Livingstonia, which prepares future CCAP ministers and community leaders.

The university is a private institution owned and run by the Synod of Livingstonia; it is open to students of different Christian traditions. The Faculty of Theology and its predecessor, the College of Theology, have operated in Ekwendeni since 2003. The campus is about 10 miles north of Mzuzu. Since its founding, the university has expanded its degree program from a two-year licentiate to a three-year diploma of theology (first awarded in 2009) and a four-year bachelor’s degree in theology (first awarded in 2010). In 2016, the university began offering a master’s program.

Approximately 200 students are currently enrolled. In addition to residential ministerial students, the university includes many students who participate in its distance learning program and are preparing to serve in ministries ranging from primary and secondary education to ordained ministry. The theology program is the first at the university to offer distance learning options. In addition to teaching, Tyler provides computer and library support services for the faculty and students. Since the university started in 2003, missionaries from the United States, Canada, Ireland and Great Britain have filled many leadership roles there. Today the leadership is all in the hands of local leaders.

Malawi is a small, landlocked country in southeastern Africa. Less than 1 percent of the population has access to a university education — one of the lowest rates in the world. Malawi has suffered from drought and floods as well as the spread of HIV/AIDS. Unsafe drinking water is another severe, multifaceted problem.

The CCAP has a long history, with roots in the Church of Scotland, the Free Church of Scotland and the Dutch Reformed Church of South Africa. The Synod of Livingstonia, one of five synods of the CCAP, grew out of a mission station founded in 1875 and named in honor of David Livingstone, the famed Scottish Presbyterian missionary. The CCAP is one of the oldest and biggest churches in Malawi. The Synod of Livingstonia alone has over 200 congregations, more than 1,000 prayer houses and about 200,000 adult members. This vibrant church has a great need for trained ministers. A 2003 survey reported just one ordained minister for every 7,000 catechized members.

Despite the many challenges and hardships that Malawians face, people’s faith remains strong. The Synod of Livingstonia reaches out to communities not only with spiritual care but is also involved in education, food security and various aspects of health care, including sanitation and the treatment and prevention of HIV and AIDS.

Since beginning its involvement in Malawi in the 1950s, the Presbyterian Church (U.S.A.) and its predecessors have sent many long-term and short-term mission personnel to serve in the country.

Tyler and his wife, Rochelle, have felt called to Malawi since their first visit in 2007. This experience led them to make Malawi their home in 2012. Rochelle is employed by Mzuzu University, where she serves as manager of the Centre of Excellence in Water and Sanitation.

Tyler holds a bachelor’s degree in aviation from Central Washington University, a master’s in theology from Whitworth University and a Master of Divinity degree from Fuller Theological Seminary.

Tyler and Rochelle are members of West Side Church in Richland, Washington.

Tyler says a key Scripture that guides his life and informs his mission service is Acts 6:1–4: “Now during those days, when the disciples were increasing in number, the Hellenists complained against the Hebrews because their widows were being neglected in the daily distribution of food. And the twelve called together the whole community of the disciples and said, ‘It is not right that we should neglect the word of God in order to wait on tables. Therefore, friends, select from among yourselves seven men of good standing, full of the Spirit and of wisdom, whom we may appoint to this task, while we, for our part, will devote ourselves to prayer and to serving the word.’”

Watch a video of Tyler Holm 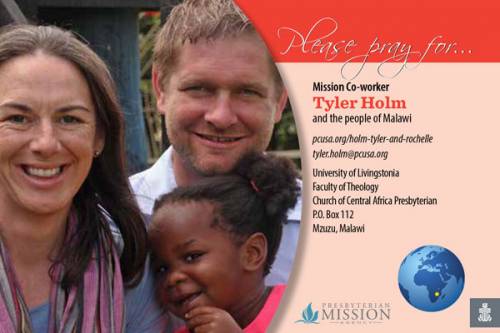 Use this card as you pray for mission co-worker Tyler Holm. This card includes a photo and overview of his work. Tyler is a lecturer…

Give in honor of the ministry of Tyler Holm