…be led forth in peace. (Isaiah 55:12). Support to the Peace & Global Witness Offering.
Make A Donation Click Here >
Home › What We Do › Where We Work › Co-workers › The Joy of Local Theology Books

A letter from Tyler Holm serving in Malawi

Individuals: Give to E200532 for Tyler Holm’s sending and support

Congregations: Give to D507572 for Tyler Holm’s sending and support

Dear partners in Mission in Malawi,

I love to read, whether when I am preparing lesson plans for my students in the Faculty of Theology or at home with our daughter before she goes to bed. But local books are generally absent from Malawi.

The University of Livingstonia Faculty of Theology has historically relied upon textbooks from the global north (what used to be called the ‘first world’) about Church history, preaching, Greek and Hebrew language studies and theological and biblical studies. Most of my students will be ordained as teaching elders, and all will be future leaders of the church and of Malawian society. These students are high achievers academically, yet, despite their success, I have had several students arrive at the university for their first year of studies without having any books of their own, except for a Bible and a hymnal. Obviously, it is a real challenge for them to get in a habit of extensive reading at a university. Also, when these students do have the opportunity to read and all their textbooks come from the global north, it exposes them to only one kind of foreign theology and way of thinking.

In just the past two years, we have two theology textbooks that have been written by our staff. This is very exciting, as all the textbooks that are written in the global north to some extent reflect the American or European background of their authors.

Dr. Moses Mlenga is currently the postgraduate coordinator for the University of Livingstonia Faculty of Theology. He obtained his bachelor’s from African Bible College in Lilongwe; his master’s from Africa International University, Nairobi (NEGST); and his doctoral degree from Mzuzu University in Malawi. His book, “Polygamy in Northern Malawi, A Christian Reassessment” was published in 2016, and it was so popular that it was sent for a second printing.

“Polygamy in Northern Malawi” looks at the role of the church in polygamous families, and at how the Church of Central Africa Synod of Livingstonia has responded. According to Dr. Moses Mlenga, “Defining marriage in one sentence in the Malawian context is not easy. It can be compared to driving up the steep, mountainous, rocky and rough 20-hair pin bend Gorodi Road to Livingstonia during the rainy season. This being the case, it is not surprising that definitions vary worldwide and in Malawi.” The Gorodi Road is infamous in Malawi. It is the first “road” in the county, going from Lake Malawi up to the Livingstonia Mission Station. Every Malawian reader knows about it.

Using figures of speech or metaphors that are culturally appropriate may seem like a little thing, but it affects the ability to communicate so much. One time I had assigned my students a chapter out of a book that was written by one of my old professors that had an insignificant reference to Holmes and Watson. These students had no idea who Sherlock Holmes is, and they were convinced it was a reference to me. Having books that use the idioms and speech of the readers, and, equally important, addressing the real thorny issues facing the church—such as polygamy— is a very exciting development. 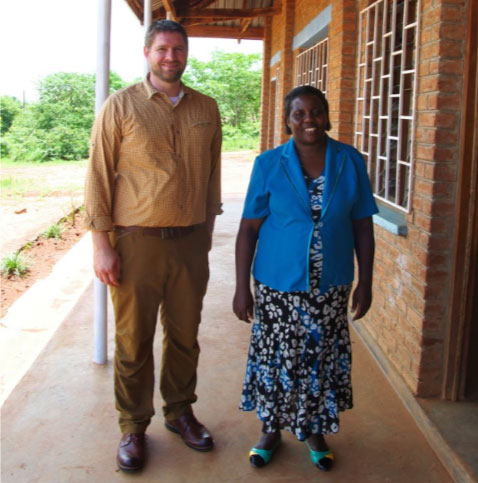 Tyler Holm with the Dean of the Faculty of Theology, Dr. Joyce Mlenga

Another recent book is “Dual Religiosity in Northern Malawi, Ngonde Christians and African Traditional Religion,” by Dr. Joyce Mlenga, dean of the Faculty of Theology at the University of Livingstonia. She obtained her bachelor’s from African Bible College in Lilongwe; her master’s from Africa International University, Nairobi (NEGST); and her doctoral degree from Mzuzu University in Malawi. Her book was published this year and looks at the Ngonde, one of the smaller people groups who mostly live in the far north of Malawi and are distinguished by their own culture and language. Her work examines the complex relationship of traditional culture, traditional religion and the Christian faith from the perspective of an insider.

It is not necessarily obvious to those Ngonde Christians that they are involved in dual religiosity. For them it is simply their way of life; it is their culture. There is an overlap between culture and African Traditional Religion. …. For instance, there is wide belief among the Ngonde that when a woman sits on a mortar she will not be able to have children. This is a belief, but not a religious belief. However, clapping hands at night is prohibited, except openly in a dance, for spirits do so, and imitation might be regarded as mockery, not flattery. This belief could be considered religious because it touches on spirits, one of the elements of African Traditional Religion.

There is quite a lot being written about syncretism and the question of culture today, but often it is written by just one culture. Specifically, most of it is just written by white men in Europe and North America who have gone to the same dozen or so schools. As outsiders, they often do not see a difference between traditional religion and traditional culture, and as Christian evangelists they often fail to see the significance of culture. It is exciting for me to see our faculty’s work not just because it is a great benefit to our students in Malawi. It is a service for the worldwide church to get these perspectives.

Training ministers and lay leaders how to look at culture holistically as part of our curriculum is never easy. The publication of these two new textbooks fills a critical gap in written knowledge for the students we are training. Reading these new works has been very enjoyable, and I hope that if you would like to understand more about the work in Malawi you are praying for and supporting, you will check them out.

Presbyterian mission co-workers are funded from the special gifts of individuals and congregations like you. Now more than ever, we need your financial support. As 2017 winds down, many individuals and congregations give large gifts at the end of the year. Would you please pray for and consider giving an early or special gift to continue my ministry or advocating for our work through encouraging your church to do so? Thank you for your prayers for the country of Malawi, its government, its leaders, its students and its future. Please also pray for our local partner, the Church of Central Africa Presbyterian.