A letter from Doug Tilton serving as regional liaison for Southern Africa, based in South Africa

Individuals:  Give online to E200416 forDouglas Tilton’s sending and support

Congregations: Give to D507200for Douglas Tilton’s sending and support

In early September a television station in Madagascar screened a horrifying video. The clip purported to show a young Malagasy woman being tortured to death by members of the Kuwaiti household where she was a domestic worker. Although the Malagasy government later claimed that the video was not from Kuwait and the victim was not Malagasy, the broadcast incited public outrage and placed the issue of human trafficking back on Madagascar’s national agenda.

Few people are more painfully aware of the tragic consequences of human trafficking than Pastor Helivao Poget, the director of ministry to marginalized people (SAFFIFAA) at the Church of Jesus Christ in Madagascar (FJKM), one of Presbyterian World Mission’s global partners. In October 2010 a body bag shipped from Lebanon arrived in Antananarivo, the capital of Madagascar, containing the body of a young woman. The woman, named Mampionona, had once been a regular at a community center run by Pastor Helivao in an Antananarivo slum. The center hosts regular meals for street kids, craft classes for young women, worship services, and a range of other scheduled programs.  Local folks are also welcome to drop in for conversation, counseling, or a meal whenever they can. Five months earlier Mampionona had confided to Pastor Helivao that she was considering taking up an offer of employment in Lebanon.  Pastor Helivao warned her about the risks involved in becoming a domestic worker in a far-off land, but Mampionona accepted the post in spite of Pastor Helivao’s admonition. 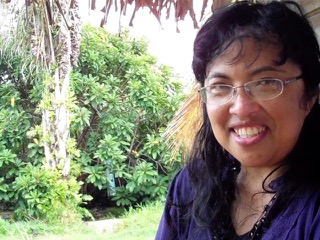 Pastor Helivao on the island of Ste. Marie, where SAFFIFAA has been working to counter sex tourism.

Mampionona was by no means alone.  Following the military coup d’état of March 2009, which replaced Madagascar’s democratic government with an unelected “transitional” administration, the island nation of 23 million people experienced significant economic disruption and decline.  Factories closed, unemployment soared, and many households struggled to make ends meet. Hundreds of thousands of children left school to hawk wares on the street, tend fields, or do other jobs to supplement family incomes.  For women, in particular, seemingly lucrative domestic work opportunities overseas looked especially attractive.

While Pastor Helivao discouraged Mampionona from taking the position, “I did not insist that she not go,” she admits, with a heavy sigh. When Mampionona’s family lost contact with her in Lebanon, Pastor Helivao became profoundly troubled.  In September 2010 she flew to Lebanon to look for Mampionona, who was not at the place where she was to have been working.  Eventually, with the help of Swiss mission colleagues, she found Mampionona’s body at a city morgue.   “I was present at the autopsy,” Pastor Helivao recalls grimly. “I could see from the marks on her body that she had been very badly abused, both physically and sexually.” 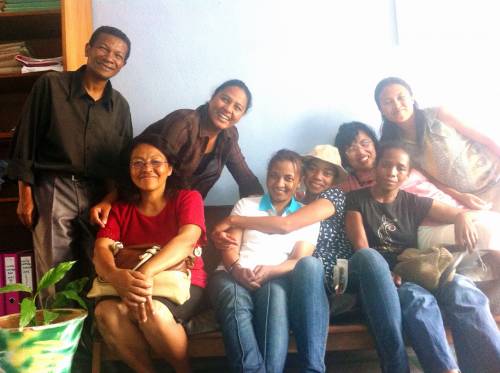 Pastor Helivao made another trip to Lebanon, gathering information to persuade Madagascar’s de facto government to intervene. Her efforts helped to identify more than 400 Malagasy women in exploitative domestic positions—and, tragically, the bodies of 45 more Malagasy women who had not survived their ordeal. With the assistance of Madagascar’s Ministry of Population and its Honorary Consul in Beirut, 380 women were able to return to Madagascar in 2011.  A short while later the Malagasy de facto government officially banned labor contracts in the Middle East. Pastor Helivao hoped that this would save others from a similar fate and bring a difficult chapter to a close.

But there was more to come. In late 2013, as she was returning from a month of church visits in the U.S.A. as a PC(USA) International Peacemaker, Pastor Helivao was contacted by a colleague whose sister had taken a domestic position in Kuwait. The sister had begged for help in escaping the unrealistic expectations and tyrannical discipline of her employer. She was afraid even to leave the house because she had no idea where to go or how to get back to Madagascar.

The story sounded depressingly familiar to Pastor Helivao, but unlike in Lebanon, Pastor Helivao had no contacts in Kuwait through whom she could find out more about the situation.  With the advice of the PC(USA) Round Table on Human Trafficking, I was able to put Pastor Helivao in touch with several people working on trafficking issues in Kuwait, and they helped us to understand the challenges faced by guest workers in Kuwait. 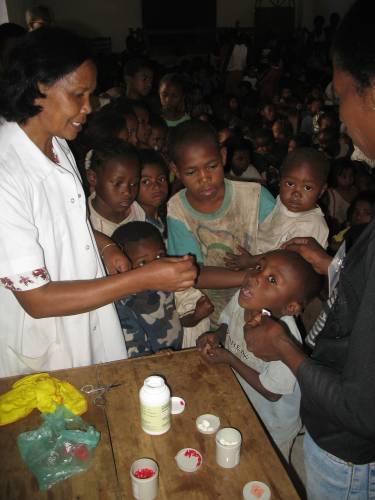 Like many Middle Eastern countries, Kuwait uses the kafala (sponsorship) system to recruit, manage and control guest workers. A migrant worker can only secure a visa if he or she is sponsored by a citizen.  If a worker breaks the contract or leaves the employer, he or she must leave the country immediately at his or her own expense. Most cannot afford to leave; wages are minimal and are often retained by the employer. As a result, a worker who leaves risks arrest as an illegal immigrant. Nationals of countries, such as Madagascar, that have no permanent diplomatic representation in Kuwait, are doubly vulnerable because they have no advocates. Many stay in intolerable situations simply because the only alternative seems to be prison and a criminal record.

Pastor Helivao visited Kuwait to meet a number of the Malagasy women being detained for violating their visa conditions.  She collected the stories of more than 40 women. Some showed signs of severe psychological trauma. Some had been raped by their employers or their employers’ sons, and children born to guest workers in Kuwait are considered stateless and typically remain with their mothers in detention. “It was only through the power and grace of God that I was able to cope with what I found in both Lebanon and Kuwait,” Pastor Helivao recalls. “God alone gave me the courage to carry on.”

Pastor Helivao discovered, to her alarm, that there were an estimated 7,300 Malagasy women working on labor contracts in Kuwait, many of whom were recruited after Madagascar adopted a ban on such contracts.  She later learned that some top officials of the de facto government had very profitable recruitment agencies and were thwarting Malagasy law by routing desperate recruits through intermediary nations. Additionally, Malagasy police recently arrested a former member of the “transitional” parliament for trafficking after finding at his home 100 young people, mostly women, who had reportedly been recruited to work in Saudi Arabia.

With financial assistance from well-wishers in Swiss churches and in Madagascar, in 2014 SAFFIFAA helped scores of women return to Madagascar from Kuwait. Pastor Helivao and her team enabled many of the women to get needed medical or psychological treatment and ultimately helped many to be reunited with their families. Fresh elections at the end of 2013 put Madagascar back on a democratic path and revived hope for more effective control of labor trafficking to the Middle East.

But there is still much more to do.  Even if recruitment of new workers is halted, Pastor Helivao’s information indicates that there are still thousands of Malagasy nationals working in Kuwait, many of whom are likely to be in difficult circumstances.  There is a need to expand domestic economic opportunities in Madagascar, particularly for women, and to promote public awareness of the dangers of human trafficking and exploitative labor contracts. The church—particularly the 6 million–strong FJKM—is ideally situated to share this message.  Pastor Helivao is working to enrich the curriculum at FJKM seminaries to better equip future pastors to educate their congregations and confront issues such as sexual violence and human trafficking.

I am so grateful for the opportunity to serve as Presbyterian World Mission’s regional liaison, working alongside partners like the FJKM, and to be inspired by leaders like Pastor Helivao who demonstrate such a strong commitment to justice and the rights of people on the margins of society. Thank you for participating in this vital ministry through your prayers, your gifts and your notes of support and encouragement.  I hope you will keep traveling on this journey with me. Please continue to pray for all of our PC(USA) mission co-workers and global partners that we may continue to collaborate with joy and vision to promote fullness of life for all God’s people.