A letter from Doug Tilton serving as regional liaison for Southern Africa, based in South Africa

Individuals:  Give online to E200416 for Douglas Tilton’s sending and support

Congregations: Give to D507200for Douglas Tilton’s sending and support

I am sure that many of you will be familiar with an African proverb that has become much-quoted in recent years, particularly in church circles: “If you want to walk fast, walk alone; if you want to walk far, walk together.” This aphorism captures with simple elegance the crux of World Mission’s missiology of partnership, as it underscores the importance of accompanying one another on our faith journeys, sharing joys and burdens and encouraging and learning from one another.

One “learning opportunity” I have encountered comes from the way in which our partners in the Uniting Presbyterian Church in Southern Africa (UPCSA) make decisions.  The UPCSA was formed in 1999 through the merger of the Reformed Presbyterian Church in South Africa (RPC) and the Presbyterian Church in Southern Africa (PCSA). While the RPC was a South African church, with the majority of its congregations situated in the Eastern Cape, the PCSA was a transnational denomination, with congregations in Zambia and Zimbabwe, as well as South Africa.  So the merged church brought together people from diverse cultures and backgrounds, which is not always an easy thing to do.  Indeed, the new denomination chose to call itself “Uniting,” as opposed to “United,” in part to emphasise the fact that coming together was an ongoing process that required constant attention.  And it has been a struggle at times.  Layers of exploitation and brokenness—artifacts of colonial rule, apartheid, nationalism, racial and cultural superiority, etc.—often act as impediments to unity, harmony and trust.  Certain issues tend to become particularly divisive, with entrenched “camps” digging in around one response or another, creating an adversarial climate that is not always healthy for the church’s witness in the world. (Does any of this sound familiar?) 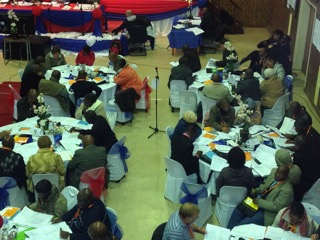 Several years ago, in an effort to break down some of the barriers and create the space for more meaningful dialogue, the UPCSA adopted new procedures for making decisions at its biennial General Assemblies. I have been invited to attend recent UPCSA General Assemblies as an ecumenical guest, so I have had the privilege of seeing the model in action. Reports and overtures are presented initially in plenary “listening sessions,” during which commissioners are allowed to ask only clarifying questions. If speakers stray into debating the merits of a proposal, or if they ask questions perceived as argumentative, the moderator asks them to reserve their remarks for the next stage of the process.

Next, the commissioners meet in pre-assigned small groups, generally of about 10 to 12 people, to discuss the proposals emerging from reports and overtures. These are known as “insaka groups” – insaka being a significant word among Zambia’s Bemba-speaking people that means “a place to gather.” Each group has a facilitator and a scribe. Members of the group discuss the proposals and suggest changes and additions. The committee reports go back to a drafting team, which tries to incorporate the various comments into a common version.

Then the revised proposals are reported back to “decision sessions” of the whole Assembly, and commissioners are now permitted to debate them. Periodically the moderator will test the opinion of the house to see how commissioners feel.  If they feel “warm” toward a proposal, they hold up orange cards; if they feel “cold,” they raise blue cards.  The moderator invites those with blue cards to share their concerns. Sometimes they raise technical points that, while important, are easily addressed by minor adjustments to the wording of the motion.  At other times they might have more fundamental objections to the proposal under consideration.  Often thoughtful objections have a surprising ability to shift the opinion of the entire house.

Last year’s Assembly achieved consensus on virtually all of its business. In a handful of cases one or two dissenters agreed not to stand in the way of the overwhelming majority after they had ample opportunity to share their perspectives. There were only a couple of issues where entrenched “camps” developed. In one case representatives of the opposing groups were sent out to forge a compromise acceptable to both sides.  In another case the Assembly agreed to “pass from the matter” without comment or action. 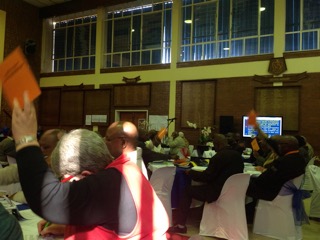 I was impressed, once more, by the pastoral nature of this style of decision-making, with its emphasis on bringing everyone along rather than reaching decisions rapidly.  (A case, perhaps, of “walking far” rather than “walking fast”?) But I also wondered how this system might work when discussing “hot button” issues—emotive concerns about which participants already have strong and inflexible commitments to particular points of view.

Over tea I mentioned my misgivings to a fellow ecumenical guest, Dr. Kobus Gerber, the General Secretary of the Dutch Reformed Church (DRC). In response he related a powerful tale of how the DRC had used a very similar process to achieve a surprising and historic decision in support of the Confession of Belhar. The Belhar Confession—and more particularly the DRC’s reluctance to adopt Belhar—has become one of the most prominent impediments to reunification of the Dutch Reformed family of churches that was segregated even before apartheid became the official policy of the South African minority government in 1948.  While many in the DRC have embraced Belhar’s understanding of unity as both a gift and an obligation from God and see its adoption by the DRC as an important sign of repentance and reconciliation, many other members have become adamantly opposed to its endorsement for a variety of reasons.

In October 2013 the General Synod of the DRC considered an overture to change the church’s confessional basis to include Belhar. To no one’s surprise, the Synod was soon deeply divided, and protracted discussion was doing little to promote consensus. At last the Synod chose a small team of people, made up of some of the most articulate and committed individuals on both sides of the issue (including the former head of the apartheid-era South African Defense Force, General Constand Viljoen, a staunch opponent of Belhar). It sent them off to develop a proposal that they could all support.  When the team returned, more than 90 percent of the delegates supported their formulation* and the Synod went on to approve it.  (DRC policy requires congregational ratification for the adoption of new confessions, and the process has since stalled at that level.)

Now that a two-thirds majority of U.S. presbyteries have approved Belhar, it seems almost certain that the PC(USA) will soon formally add this statement to our Book of Confessions, making it the first to emerge from churches of the Global South. What other ideas and practices from our African partners can help us to think in new ways about how we live out our faith?

I am blessed by the opportunity to learn from the inspiring witness of partners like the UPCSA. And I am constantly grateful for the ways that you accompany me in this ministry through your prayers, your gifts, and your encouraging notes. Please continue to support and pray for the work that God is doing through the PC(USA) and our global partners, and pray also for gifts of discernment and creativity so that we may continue to find ways to support and learn from one another.