Heartland of the country

This phrase conjures up images of farmers in red flannel shirts, combines, rich soil, and giant bundles of wheat. While this can still be found, the reality is often less Norman Rockwell. Decrepit barns, empty silos, abandoned mills and boarded-up Main Streets are common. Presbyterian Today’s Donna Jackson writes about how churches are dealing with hunger in rural areas, as three quarters of the counties in the U.S. with the highest rates of food insecurity are rural.

In some areas, filling prisons with detained immigrants and criminals is far more lucrative than growing food. Ironically, under our current U.S. president, in just two years, the US Department of Agriculture has spent over $100 million to build rural prisons. Yes, USDA farming money is footing the bill for more prisons.

We also know that vibrant rural areas are core to the well-being of humans and the rest of God’s creation. Small-scale family farmers produce globally 70% of the world’s food; 80% in so-called developing countries. Ownership of, or secure long-term access, to land is what motivates farmers to practice sustainable approaches. Agroecological farming retains and captures additional carbon from the atmosphere, which slows the warming of the planet. Agroecology also protects the biological diversity in nature. Yet, giant multinational corporations are promoting a less sustainable model of agriculture that benefits their bottom line, and pension funds and governments are buying up farmland around the world. Even when not stolen from communities, as has happened in Brazil [see new report, Complicity in Destruction: How Northern Consumers and Financiers Sustain the Assault on the Brazilian Amazon and its People], the buying spree by financiers is sending the price of land sky-high. This hurts family farmers in the U.S. and around the world.

For all these reasons, who controls the land and how it is used is critical to achieving justice, reversing global warming, and people being able to feed themselves – or not.

The US Food Sovereignty Alliance (USFSA) held its IV National Assembly earlier this month in Bellingham, Washington, on the land of the Lummi and Nooksak nations. The Presbyterian Hunger Program – one of the founding members of the USFSA –  helped plan the assembly, which was attended by 117 members, allies, people of faith, and others from more than 71 organizations and seven countries. Locally, the farmworker-led Community to Community Development hosted the folks that gathered from around the world. 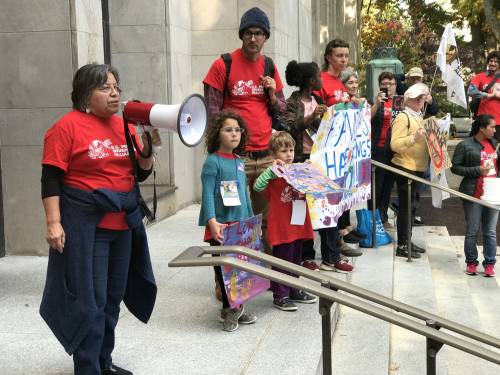 Rosalinda Guillen, director of Community to Community (C2C), speaks to USFSA and community members who joined in a march and rally calling on Bellingham City Council to stand in solidarity with resident immigrants and become a sanctuary city. 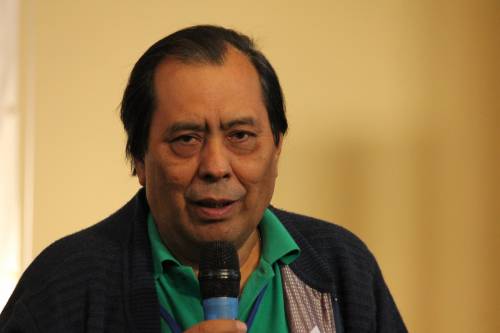 Fausto Torres, with the Nicaraguan Asociación de Trabajadores de Campo (Association of Farm Workers), kicked off the first plenary panel with a history and powerful analysis of the corporate food regime, and what is needed to shift things toward equity and justice. 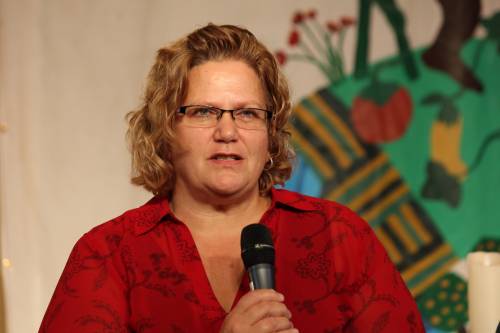 Joan Brady, representing La Via Campesina – North America and the National Farmers Union (Canada), explained the forces that have made farming so challenging for her family. These challenges illustrate the anti-producer dynamics within the current system that continue to bankrupt farmers in North America and around the world. The emigration of former farmers and rural peoples from Latin America northward illustrates the push-factor of immigration and how damaging so-called free trade agreements and other policies have been to rural folks. 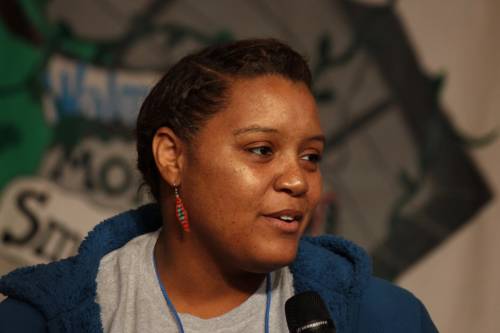 Darnella Winston a farmer with the Mississippi Association of Cooperatives, part of the Federation of Southern Cooperatives, told about how she and other Black farmers have suffered outright discrimination from the US Dept. of Agriculture along with other structural challenges to surviving, much less thriving, doing agriculture in the southern states of the U.S. 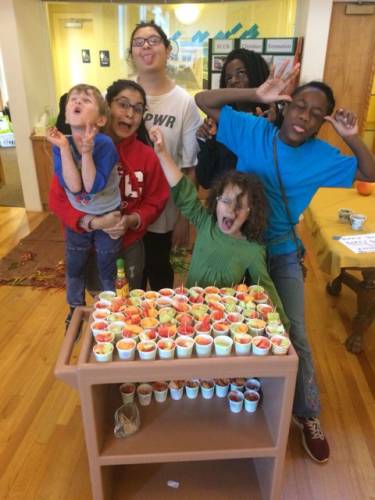 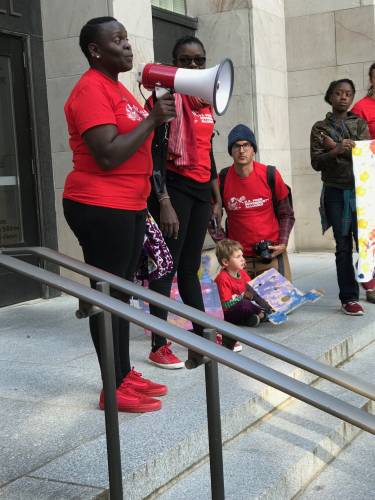 Sophie Ogutu and Lydia Dola, Kenya artist-activists with the World March of Women, joined the Assembly and spoke at the rally at City Hall in Bellingham. 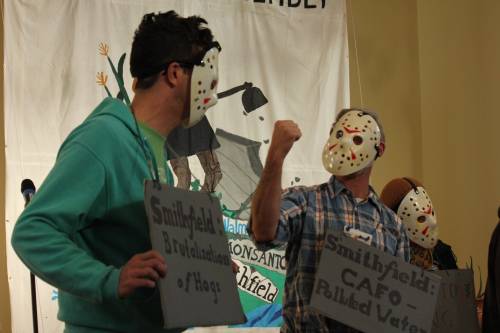 Each day of the Assembly included místicas, which are dramatic rituals that Brazilian activists have traditionally done during gatherings. The World Social Forum started in Brazil and since then groups in the US and around the world have sometimes taken up this tradition. These two actors represent  mistreatment of animals and the water pollution sometimes caused by Concentrated Animal Feeding Operations (CAFOs), also called factory farms. Dozens of overflowing lagoons in North Carolina after the hurricane is a recent example of this. 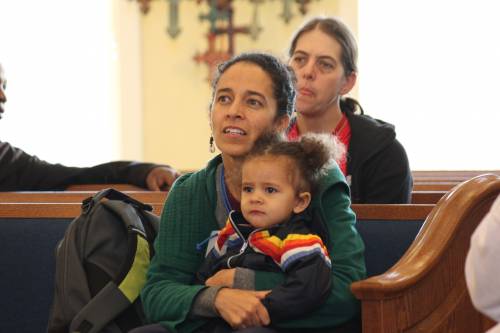 Sara and her daughter watched the mística in the chapel of First Congregational Church where the Assembly took place. 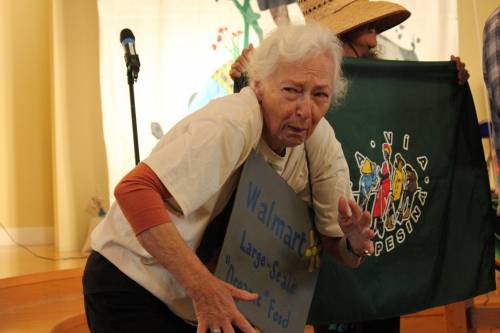 Once unmasked by the rural folks, representatives of the industrial agriculture food and farm system lost their power – cowering and scuttling off into the shadows. 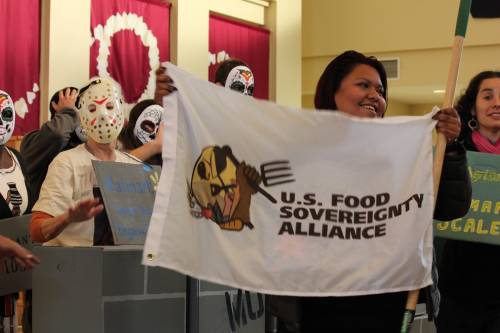 The farmers, farm workers, food chain workers and allies entered the realm of the industrial agriculture food and farm system and with smiles, farming tools, and solidarity transformed everything. 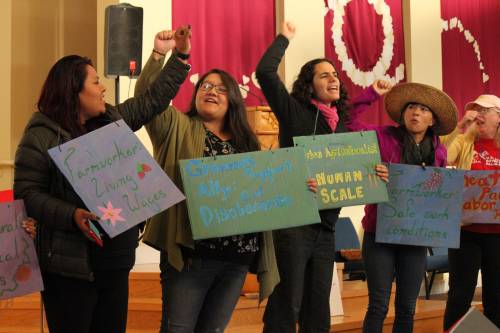 Actors shouted out what they stood for:  living wages for farmworkers, farmers at the center of the food system, safe and dignified work, ecological production, and so on, with the participants joining in the chants. !Viva! !Viva! !Viva! 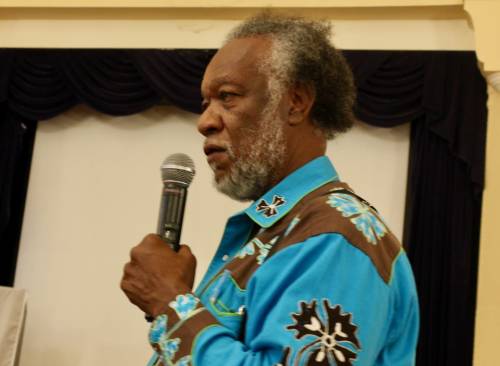 We began the Food Sovereignty Prize with a mística in which we celebrated food sovereignty alliance champions who have passed in the past few years. Ben Burkett, with the Mississippi Association of Cooperatives and former Board President of the National Family Farm Coalition (NFFC), gave a moving tribute to one our ancestors in the struggle, Brother Dave Andrews, who worked with Catholic Rural Life and the Food & Water Watch, and who I served with on the Heifer International board. Other ancestors honored were farmer John Kinsman, former NFFC director Kathy Ozer, and Detroit activist Charity Hicks – all had been active members of the Alliance and long-time champions of food justice and food sovereignty. 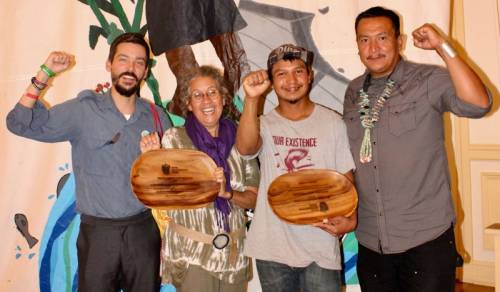 The Food Sovereignty Prize, first awarded in 2009, promotes an alternative narrative to the World Food Prize and lifts up the human and ecological interactions necessary to build food sovereignty. It is awarded to social movements and grassroots-led organizations that are actively working towards a food system that centers people and the planet, focuses on collective action, and climate justice. This year, in the domestic category, Black Mesa Water Coalition is honored for their commitment to restoring indigenous food sovereignty and uplifting youth leaders among Navajo and Hopi communities. Roberto Nutlouis and Sheldon Netoni received the prize on behalf of Black Mesa. Organización Boricuá de Agricultura Ecológica de Puerto Rico, the international honoree, is recognized particularly for their mobilization of Food Sovereignty Brigades to assist farmers with recovery efforts in the aftermath of Hurricane Maria. Dalma Colon and Jesus Vazquez received the prize for Boricuá.

The Assembly was the culmination of a process to together create a two-year action plan. The process began with an assembly in each region (South, Northeast, Midwest, West), where members analyzed current conditions, challenges and opportunities to advance food sovereignty and the right to food. Issues from the regional assemblies were presented for discussion and consideration for inclusion in the USFSA’s national work plan.

At the Assembly, members finalized the work plan, which will be carried out regionally. To organize priorities nationally, five issue-based cross-alliance collectives emerged:  Political Education; Narrative Strategy; International Relationships; Youth; and Agroecology:  Land and Water. The group reaffirmed its commitment to offer multiple paths to USFSA engagement with the grassroots movements-building effort led regionally. The IV National Assembly highlighted the overarching importance of access to and control of resources by local communities to achieve food sovereignty.

See the Assembly’s Solidarity Statement below. 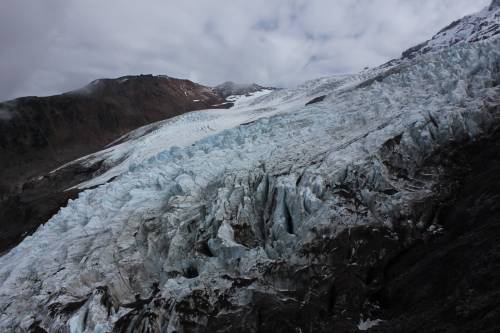 I was thrilled to visit the Kulshan Glacier (later called Coleman Glacier) on the sacred mountain, Qwú’mə Kwəlshéːn (Lummi) or Kw’eq Smaenit or Kwelshán (Nooksack), later called Mount Baker. May we act quickly to ensure that our children and grandchildren get to live in a world with glaciers and myriad species!

Solidarity Statement from the Assembly

The USFSA stands in solidarity with La Via Campesina as it works towards the UN adoption of the Declaration of Peasant Rights. Peasants and small- and medium-scale farming families are increasingly at risk of displacement, criminalization, violence, and harassment, with rural women particularly affected. Existing legal instruments are not enough to protect peasants and rural workers from ongoing systematic discrimination and abuse. This Declaration would draw attention to the threats and discrimination suffered by peasants and others engaged in small-scale food production around the world and offer a new legal tool for addressing abuse. We call on the United States and other members states to support the Declaration of Peasants Rights.  [see press release]

The USFSA stands in solidarity with farmworkers, critical workers who risk their lives and health in farm fields every day for incomes that are the lowest of any sector in the economy and on whom our food system depends.  The current H2A agricultural visa program is a temporary guestworker program that employers may use for agricultural labor. However, the program has dehumanized workers by legalizing migratory employment, offering them no chance for legalization,  residence or permanent livelihood in the US. The H2A program ties workers to a single employer, and those who have not organized into a union are subject to abuses and economic extortion by labor contractors, foremen and employers. The guest worker system views farmworkers as resources, not as human beings. The USFSA opposes the H2A program and denounces, in the strongest terms, the proposed H2C program, which would dramatically worsen worker conditions, continue to displace domestic workers, expand guest worker provisions into the food processing, nursery and other food system industries, eliminate worker housing support, and continue the exploitation of workers through systems ultimately derived from plantation slavery.

The USFSA stands in solidarity with the Call to Protect Food Systems from Genetic Extinction Technology. Gene drives are a new tool that force genetically engineered traits through entire populations of insects, plants, animals and other organisms that could spread engineered genes uncontrollably, altering ecological systems and food webs. Their use could undermine the food sovereignty of indigenous communities, farmers, food workers and consumers, and infringe on the right of all peoples to healthy, ecologically produced and culturally appropriate food. The USFSA calls for a global moratorium on any release of engineered gene drives, and urges governments to establish participatory technology assessment processes to ensure the full free, prior and informed consent of indigenous peoples and other affected populations for all emerging biotechnologies.

The USFSA stands in solidarity with producers, eaters and Mother Earth who would all be victimized by cruel and unjust proposals in the House version of the farm bill. Some of these proposals would increase work requirements for eligibility for the Supplemental Nutrition Assistance Program (SNAP), defund critical conservation programs, reduce support for beginning and socially challenged farmer programs, and end the Double Up Bucks farmers market program. The USFSA also strongly denounces the King amendment to the House farm bill, which would give corporations and agribusiness greater control over the food system. This provision would restrict state and local governments from regulating agricultural products and could nullify the local Food Sovereignty Ordinances passed by many towns in Maine. It could potentially preempt laws that curb pesticide use, regulate farmworker safety, prevent cruel livestock practices, label GMO foods and support initiatives and state efforts to legalize certain local foods, such as raw milk and wild rice. 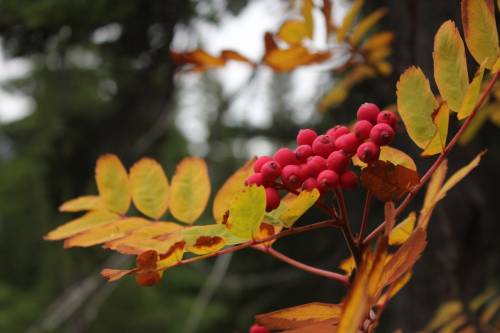 Wild berries on the side of Mount Baker