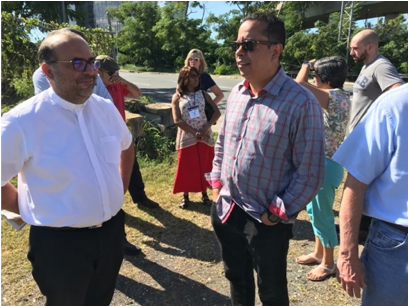 In December, I participated in a delegation comprised of staff from Presbyterian Disaster Assistance (PDA), Presbyterian Self-Development of People (SDOP), and Special Offerings, and we invited local pastors and mid-council staff to join us for the visits to Fideicomiso de la Tierra, a decimated family farm in Lares, and Presbyterian Camp Guacio over the course of two days. 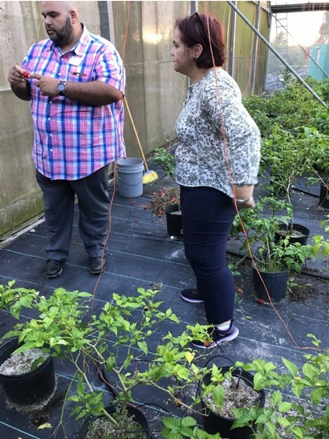 Edwin and Lourdes in a greenhouse that Cesar and Lourdes were able to reconstruct; pepper plants growing with a hydroponic nutrient mix whose pump is powered by the sun

I remained in Puerto Rico for an additional week and visited a number of farms, agroecology education sites, and agroecology initiatives. The purpose was to learn more about the kinds of initiatives happening and what groups and people were involved in training beginning producers, scaling up and out the local food economy, and working to increase the food sovereignty and resilience of the archipelago as it inevitably faces future storms and other challenges in the age of climate chaos.

The delegation visited the farm of Lourdes and Cesar in Lares, which had been entirely destroyed by Hurricane Maria. They have dug themselves out and are slowly, ever so slowly, rebuilding their impressive hydroponic vegetable growing systems, powered by solar energy. The couple employ low-income elderly folks in the isolated town and provide so much to the community, partly supported by a Collaborative Baptist Church in the area. Lares is about a 30-minute windy drive from the Presbyterian Camp Guacio in western Puerto Rico.

Before we headed west to the farm, we visited that morning with Fideicomiso de la Tierra, Puerto Rico’s first community land trust, and the work that PHP, PDA and SDOP are jointly funding. 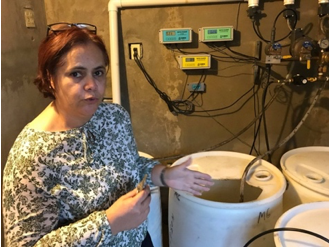 Mariolga Juliá Pachecho, Special Projects Manager for Fideicomiso, gave us an overall orientation to the work and in this short video explained the geography of the natural canal where they have created a community land trust to prevent gentrification and work to keep the eight communities of the area intact, vibrant and healthy. 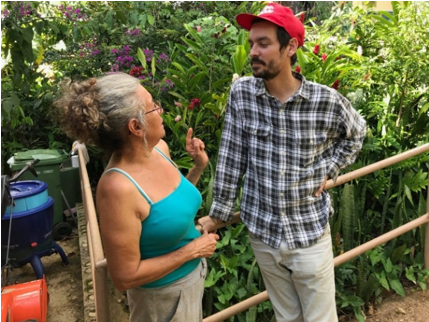 I visited with various people and groups involved with agroecological food production. There are numerous vibrant initiatives and organizations working to increase agricultural self-reliance and the production of healthy, organically-grown food around the islands.

Jesús Vázquez Negrón, an organizer with Organización Boricuá de Agricultura Ecológica de Puerto Rico (its full name in Spanish), is standing with Dalma Cartagena, an agroecology educator and agronomist at a public secondary school in Orocovis, Puerto Rico. Dalma is one of the founders and serves on the Board of Directors of (locally known as Boricuá). Jesús and I spent the day together, which included a visit to Dalma in the middle of the island, a visit with Ian Pagán Roig at Finca Josco Bravo in Toa Alta, and some visits in San Juan. 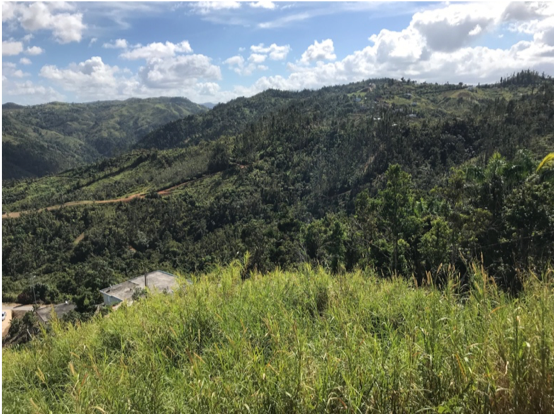 Jesús explained that just six months ago, most of the trees you could see from here were still just sticks without foliage.

Looking across the valley, you can see many evergreens that are still mostly stripped of their needles from last year’s hurricane; on the left, much of the foliage has recovered.

Jesús later explained that in the past the mangrove forests along the coast of P.R. were seen by the government as contributing to the breeding of mosquitoes and were cut down many years ago. In addition, many more were destroyed to make room for ‘development’ of hotels, houses, roads, etc. Here is a very short video of this.

As I traveled around the island, I often saw traffic lights, street lights, and other infrastructure that had still not been repaired. Many streets had not been maintained and axle-breaking potholes are everywhere.

Then on east-facing mountain sides, many trees had been toppled and those standing were just beginning to regrow. Nevertheless, I was amazed at how quickly plants and trees could regenerate, especially in that warm, wet and sunny climate.

While the physical realm in Puerto Rico has recovered relatively quickly, the emotional landscape was clearly injured and still raw. The trauma of such a fierce storm combined with the sense of isolation and neglect felt by folks we spoke with was apparent. As we spoke of the aftermath and what was lost, tears flowed.

Yet, these are brave, rugged and adaptable – not to mention warm, generous and friendly – people who have not given up on the island they love nor on each other. 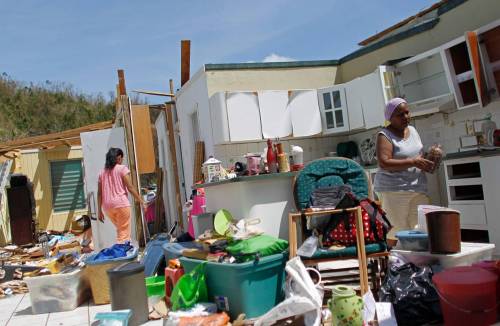 The destruction of grocery stores and inability to get food to people for days were brutal awakenings to what they had known in their heads was a precarious, import-dependent food system. The hurricane perhaps made them feel it in their bones and stomachs.

While efforts to grow more food on the island started before Hurricane Irma and María, the destruction of the storms has spurred greater activity around training and growing, and more farmers are figuring out how to build a resilient local food system.

I am very encouraged by the knowledge, spirit of solidarity, and dedication of the farmers and educators – like Dalma above and Ian below – who are working together to increase food production on the island that is sustainable, organic, and resilient in the face of disasters. It is called agroecology, our world needs it badly, and the movement is growing!