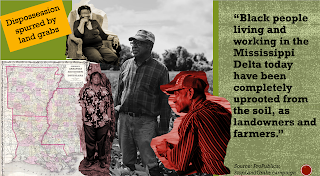 It would be hard to understate the importance of land. How we use it is an existential proposition for all forms of life from the tiny to the immense. And as Malcolm X said, “Land is the basis of all independence. Land is the basis of freedom, justice and equality.”

As the climate crisis intensifies, stopping land grabs and defending the land and territory rights of Indigenous, Black and African-descended peoples, family farmers, and traditional communities are core to protecting peoples and ecosystems.

Pension funds are targeting farmland for speculation and expansion of agribusiness, driving the destruction of ecosystems, displacing Indigenous and traditional communities in the Brazilian Cerrado, and family farmers in the United States – particularly farmers of color. Workers and retirees whose pension funds are invested in farmland speculation also face risks to their future stability from the unsound nature of these investments.

In response to this multi-pronged threat, the Presbyterian Hunger Program and a transnational collaboration of old and new partners joined forces to initiate the Stop Land Grabs campaign. We began slowly in 2016 and have been gaining steam ever since. Our strategy connects Brazilian and U.S.-based organizations to raise public awareness, hold financial actors accountable, stop farmland speculation, strengthen community-to-community solidarity, and defend land, food, water and other resource rights.

Following the 2008 financial crisis and the collapse of the U.S. housing market, financial corporations began to speculate on farmland, promoting the expansion of corporate agribusiness in the Brazilian Cerrado. The Brazilian Cerrado is the most biodiverse savanna in the world. Its intricate root system plays a crucial role in Brazil’s water system. Much of the agribusiness expansion is for “plantation agriculture” – the monocrop production of soybeans, primarily exported for feed in factory animal farms in the U.S. and elsewhere.  This rush to buy land has led to illegal land seizures and sales, uprooting and violating the land rights of Indigenous, Quilombola (Afro-Brazilian), and peasant communities with ancestral ties to the land. Tactics of intimidation, violence, and fraud have been used against these communities, resulting in human rights violations and destruction of community food systems, water sources, biodiversity, and livelihoods.

In the U.S., financial corporations like TIAA have spent billions of dollars to acquire hundreds of thousands of acres of farmland across the country. In Mississippi, these acquisitions have taken place in predominantly Black counties, exacerbating the effects of land theft from Black farmers. This land is rented primarily to large-scale farms for commodity crop production, especially of soybeans for animal feed.

This model of corporate land ownership, contract agriculture, and agribusiness monocultures threatens the rights of farmers and communities, the health of local food systems, and the diversity and resilience of rural economies.

Our Strategy and Where You Fit In

Some accomplishments of the Stop Land Grabs Campaign/Coalition (SLGC) on these strategies:

2.  Securing Land Rights by accompanying communities on the frontlines

We need your support to increase our impact and strengthen Stop Land Grabs!

Andrew Kang Bartlett has worked with the Presbyterian Church (USA) Hunger Program in Louisville, KY since 2001. The Hunger Program works to create healthy, sustainable and just local food economies globally. Andrew works to equip Presbyterians and others around initiatives, partnerships and campaigns that address the underlying causes of hunger, and he coordinates the U.S. grant-making program. In Louisville, he is active on the leadership teams for the Food in Neighborhoods Community Coalition

Can we have dignity in a world that crosses ecological limits?
By Jenna Farineau