While wholeness may be the ultimate goal, in the meantime, I value determined weaving.

The wholeness we seek may be beyond our reach given the lack of maturity of Homo Sapiens Sapiens (such a self-congratulatory term), but weaving with those you care about is good, true and (while definitely messy) beautiful! 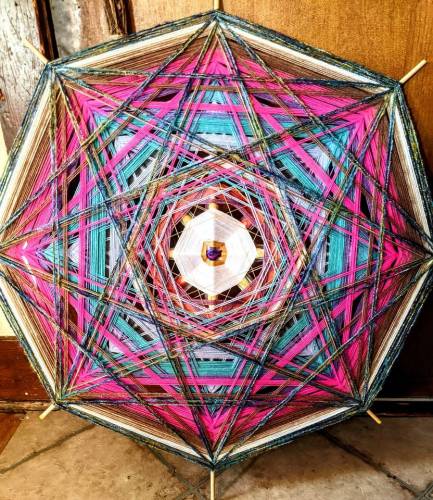 Today, the gift I bring is a loose tapestry woven from the threads of open tabs on the Firefox. Some stories are upsetting (sorry, the first one is) and some are hopeful and even delightful. I hope you’ll find a thread or two of interest.

Have you ever tasted a venison stew tumbled with vegetables and simmered in an acidic broth for so long that the meat melts in your mouth?  I give thanks to my niece’s husband, Charlie, for helping me experience that for the first time recently. Many people love deer meat and many depend on it for protein nutrition. Unfortunately, partly because we’ve sportified deer hunting with trophy or captive hunting facilities, six of the last 11 bucks Paul Annear harvested on his family’s property in 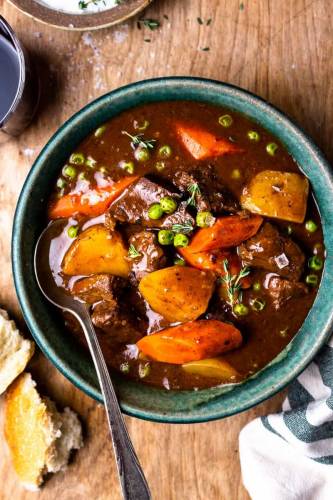 Wisconsin were infected with Chronic Wasting Disease (CWD), a percentage that tracks with countywide infection rates. Many low-income rural residents in Wisconsin and other states receive donated venison in food pantry boxes or served in meals at  feeding centers. With food insecurity back to pre-pandemic rates, and inflation driving up the cost of beef and veal by 14.3 percent, CWD may impact people already struggling to put fresh food on their tables.

Kip Adams, the chief conservation officer for the National Deer Association (NDA), says many wildlife managers believe that the greatest culprit in spreading the disease is captive hunt facilities. 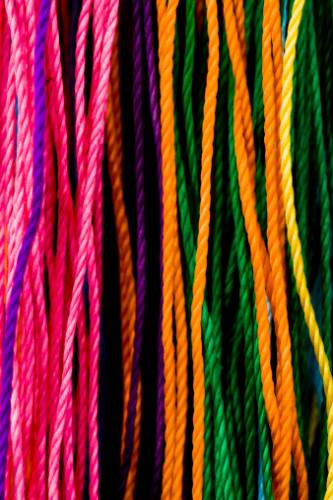 These are tracts of fenced land where people come to trophy hunt. What are known as shooter bucks are reared, with considerable trauma, in breeding farms that proliferate mostly in Texas. They are then transported across the country to hunting facilities from which they frequently escape; between 2004 and 2007, 437 animals escaped from facilities in Wisconsin alone. Infected escapees—but also penned animals that wander up to the fencing—can and do transmit CWD to wild deer populations. As a result, it’s rapidly spreading through some regions and moving into others. (Lela Nargi, Civil Eats, 6/21/22)

The Humane Society estimates that there are more than a thousand captive hunting operations across the country and about five hundred are in Texas alone. 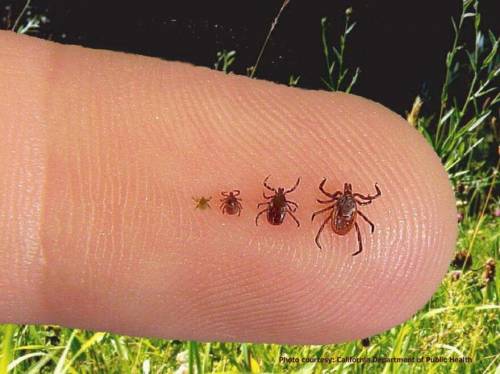 Speaking of Texas, Disease Ecologist Dr. Adela Chavez says ticks have fewer diseases in Texas partly because it is just too darn hot!  Questing is what ticks do to find blood to suck, where they almost endearingly wave their arms until an animal – or you – come close enough to clamber onto. Chavez says, “Lyme disease is present here in Texas and throughout the South, but ticks don’t go as high on the vegetation as strains of the same tick species do in the Midwest,” she said. “They don’t transmit to humans or acquire pathogens as much.”  (Check out Chavez’s impressive research here) 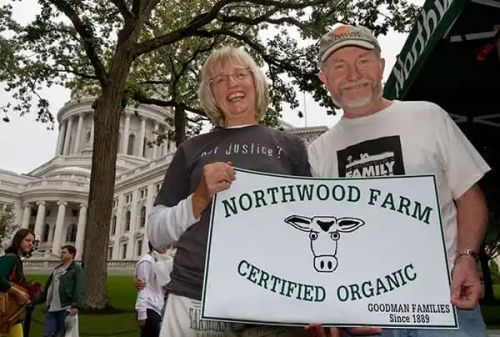 Speaking of acquiring, my friend and colleague, Jim Goodman (above on right), a dairy farmer in Wisconsin, makes the case that it is in the interests of white farmers to support land acquisition by Black farmers.

The context?  Decades of discrimination against Black and brown farmers and their loss of land and livelihoods. It’s been 18 months since the $4 billion federal debt relief package for Black and other marginalized producers passed under the American Rescue Plan, yet no relief has come for the 15,000 farmers and ranchers of color who applied because of lawsuits from farmers in several states.

Goodman, who struggled for years to stay afloat as a dairy farmer, declared, “We should be lifting each other up, not tearing each other down. As long as farmers are pitted against farmers, regardless of race or scale of operation, rural America—and the rest of the country—will suffer.”

Goodman talked about some of the efforts to lift up those farmers:

The Federation of Southern Cooperatives, a founding member of the National Family Farm Coalition that has upheld the rights and interests of Black farmers, landowners, and voters since 1967, is working alongside the USDA to defend the debt relief program. The Federation was gathering declarations from farmers or ranchers of color who have experienced discrimination at the USDA, and from white farmers who have observed discrimination, over the past 10 to 15 years.

Hopefully this evidence will help protect these farmers and keep farmland in their hands. And speaking of Wisconsin dairy farmers, Civil Eats recently reviewed the book:

Milked: How an American Crisis Brought Together Midwestern Dairy Farmers and Mexican Workers
By Ruth Conniff 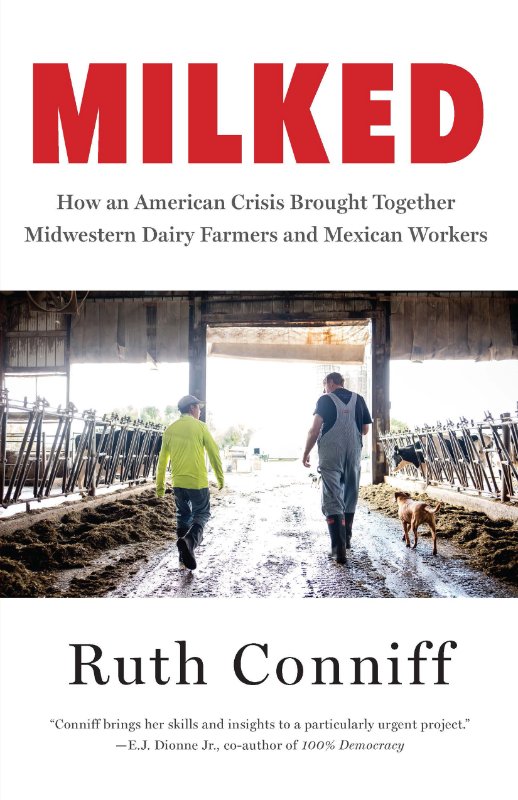 It can often be difficult to illustrate the relationship between food and politics. In Milked, former editor-in-chief of The Progressive, Ruth Conniff, leverages human stories to trace this intersection with powerful clarity in her first book, which follows the lives of Mexican farmworkers and the Wisconsin dairy farmers with whom they work. In the process of documenting these stories, Conniff creates a pathway to better understanding two major political crises: the devastation of farm ownership in U.S. rural communities and the intense politics surrounding immigration that often put farmworkers in a precarious position. Conniff finds that the common links between these two issues—and these two communities—are the global economic and political forces that are changing the landscape of food production. In a society where many have grown comfortable writing off farmers and letting workers remain in precarity, Milked makes a deeply moving appeal for us to take a harder look at the outcomes of an increasingly monopolized, industrial food system.
— reviewed by Lindsey Margaret Allen

The “increasingly monopolized, industrial food system” referred to has been shaped by government policies, which are shaped by corporations, who in turn benefit most from this system. One community fought back when a plot of land in Decorah, Iowa was purchased with the intent of selling it to a concentrated animal feeding operation (CAFO). Concerned neighbors banded together and convinced the landowner to sell to them instead of putting it up for auction. The fruit of their efforts was the establishment of Humble Hands Harvest, a women-worker-owned farm nestled on 22 acres. The farm’s aim is to present an alternative to industrial agriculture and to, in their words, “queer the land.”
From the YES! article, “The Queer-Led Groups Modeling a New Form of Land Access“:

“Our farm is queer because it’s really different from the normal farm,” says Hannah Breckbill, one of the farm’s three worker-owners. For one, the farm prioritizes sustainable perennial crops, which regrow year after year, in contrast to the vast majority of global croplands that are dedicated to annual crops, which require planting each year. She says that her farm’s emphasis on community also stands in stark contrast to out-of-town commodity crop growers. As a vegetable farmer on small acreage, Breckbill isn’t considered a “real” farmer by many other farmers in the area.

“Day in and day out we’re growing food for people,” she says of herself and her fellow worker-owners. “We’re bringing people out onto the land and into connection with what’s going on.”

That access to land is a critical component of this work. It’s an effort to overcome the centuries of systemic discrimination that have prevented marginalized groups from owning farms or homes, as well as the economic freedom and mobility they can provide. 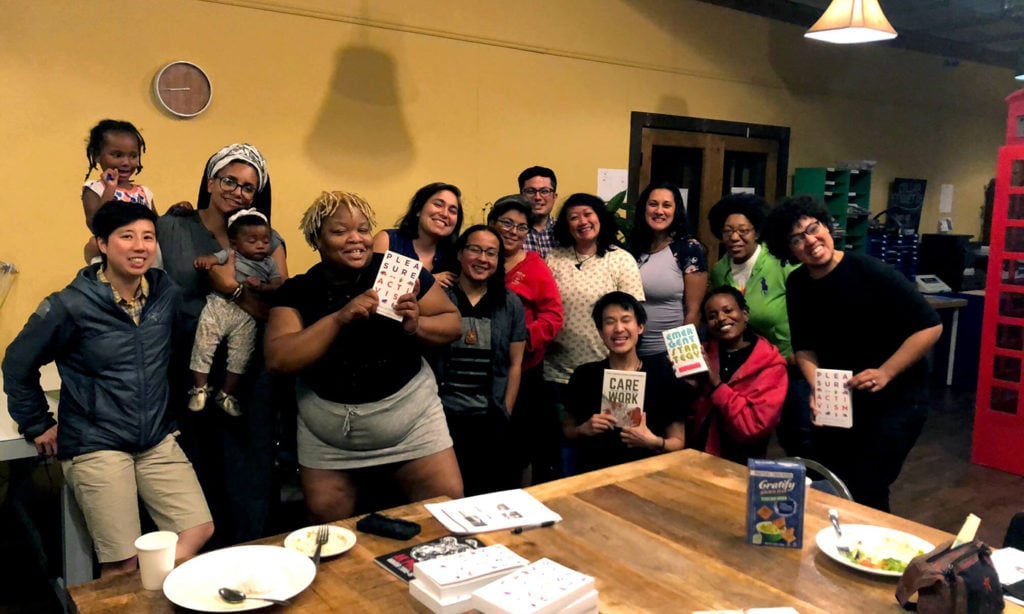 Queer the Land members at a general membership meeting discussing the book Emergent Strategy by adrienne maree brown. Photo from Queer the Land.

Access to agricultural land and to housing have been the foundation of wealth building for tens of millions in the U.S., but discriminatory practices and policies, and redlining have thwarted people of color from growing wealth for their families and communities. For our urbanized population, owning a house is often a critical step in stabilizing and growing personal wealth. So, a group in Seattle, called Queer the Land is:

tackling the Seattle housing crisis head-on by setting up a land trust to support those left behind by rampant gentrification and displacement. The group centers BIPOC leadership and just purchased a 12-bedroom house after a drawn-out racist battle in the Beacon Hill neighborhood.

Through differing approach and cooperative ownership models, Queer the Land and Humble Hands Harvest are sidestepping the capitalist constraints that typically use land in ways that fuel the climate crisis. Instead, they aim to create a regenerative economy of care. Taking back the land is essential.

Jayce Marrakesh, a Two-Spirit Black and Indigenous program facilitator for Queer the Land, says they will do their part to minimize climate impacts through permaculture, which is all about regeneration. Marrakesh sees the elements of their work as connected by a common thread of healing generational trauma and reclaiming wellness for marginalized people: “If you’re well in body and spirit, you can dream and create.”

While there are other gems open in my Firefox, I’ll start bringing this to a close on a lighter note — a short piece by Vu, whose insights you can enjoy every Monday by signing up on this page. This week’s post is titled,

13 Types of White Moderates: Which Ones Are You?

“I must confess that over the past few years I have been gravely disappointed with the white moderate. I have almost reached the regrettable conclusion that the Negro’s great stumbling block in his stride toward freedom is not the White Citizen’s Counciler or the Ku Klux Klanner, but the white moderate, who is more devoted to ‘order’ than to justice; who prefers a negative peace which is the absence of tension to a positive peace which is the presence of justice.”

Vu goes on to describe 13 archetypal “moderates.” One example is #8,

The Civility Cop: Believes in equity and justice, but thinks it’s more important for people to be civil to one another. As Dr. King wrote, these are the people who prefer the “negative peace” of people getting along and there’s no tension, than true peace and justice, which may necessitate the presence of tension, conflict, and people hating each other. The Civility Cop fails to understand how exhausting and unjust it is for the oppressed to constantly have to act civil to those who are complicit in oppressing them.

See if you are described in any of these. But listen to Vu and “…don’t typecast people. (“John is such a pearl-clutching both-sider!”) The reality is that any of us (and our organizations, foundations, publications, etc.) could fall into any of these archetypes at various times and into multiple archetypes simultaneously.”

One final thread about access.  Remember that everyone has the right to pleasure and enjoy this final article, Discovering accessible delight, where Luticha André Doucette, an incomplete quadriplegic and disability rights advocate (and a business owner, author, changemaker, fencer, and proud cat mom) makes the case for joy.

Your gifts to One Great Hour of Sharing and the Hunger Fund support the Presbyterian Hunger Program and our dozens of partners working globally to end hunger and its causes.