The full article is here (pages 9-11) and includes great content on U.S. farm justice history.  Family Farm Defenders is a strategic partner of PHP and a fabulous, farmer-led group that is committed to solidarity and movement building. You can find important analyses on their issues page and you can become a member — old-school-style — by filling out a membership form and mailing it in with a check! You can also just click on a ‘Donate’ button and email them about joining.

The brittle vulnerability of corporate agribusiness was one of the first supply shocks felt by many as the pandemic came to grip the world in early 2020. 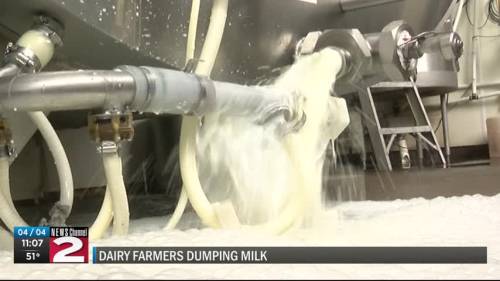 Streams literally ran white as farmers were forced to dump their milk without any buyers and piglets were euthanized in their pens as packing plants cancelled their contracts, while still forcing their sick employees to show up for work or get fired.

Meanwhile, big box retailers were rationing their inventory, limiting consumer purchases to one gallon of milk and one pound of bacon at a time. As online sales jumped, Amazon workers were expected to work even harder on behalf of the world’s richest billionaire, Jeff Bezos. For many, the abusive treatment and crass exploitation of essential workers was simply intolerable. Thus, it was hardly any surprise when dozens of labor unions and social justice groups, led by Cooperation Jackson, called for a May 1st General Strike against the disaster capitalism that was using the pandemic to extend its reach.

Fortunately, communities can democratize and relocalize their economy to bypass the corporate bottleneck, and we certainly saw this happen across the foodshed. With a 60% jump in Food Bank visits as unemployment rates skyrocketed, the Wisconsin Hunger Task Force earmarked over $1 million in scarce funds toward buying milk direct from family farmers to feed those in need while Second Harvest set up an “Adopt a Cow” donation program to help fill their milk gap. Sassy Cow Creamery in Portage County even installed a fridge outside their door so that anyone that lacked milk could help themselves. So-called “Freedges” are popping up in communities all across the U.S. to provide donated food to those in need – in New York City there are over 60 now installed on public sidewalks and available round the clock thanks to volunteers with the anarchist collective, A New World in Our Hearts. When not demanding justice for Breonna Taylor, who was shot dead by Louisville police in her own home on March 13, family farmers and local food activists behind New Roots have been expanding their Fresh Stop Markets to get more healthy produce to low-income folks in their community. 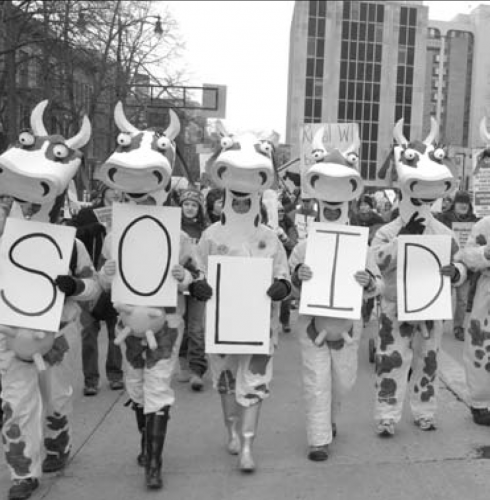 Cow protesters from the Pull Together Farmer Labor Tractorcade at the Wisconsin State Capitol on March 12, 2011. Photo courtesy of Family Farm Defenders

The Chefs are Stepping Up

Chefs are also stepping up to address Pandemic food insecurity while also tackling systemic inequality, transforming their restaurants into volunteer community kitchens. In Chicago, Chef Roberto Perez of Urban Pilon, Chef Fresh Roberson of Fresher Together, Chef Karla Morales of Amor y Sofrito and Chef Kwamena of the Let Us Breathe Collective have become local pillars of the Everybody Eats Mutual-Aid Meals program, supported by the Little Village Environmental Justice Organization. In Minneapolis, when the Gatherings Cafe was forced to close in March due to the Pandemic, it was taken over by native chefs and started delivering meals to elders in the Twin Cities area, featuring delicious indigenous ingredients. According to Brian Yazzis, who is also serving up native food to water protectors during the Standing Rock protest, the food is medicine.

Adrian Lipscome, owner of the Uptown Cafe in La Crosse, WI, launched her own 40 Acres and a Mule Project in March to help reestablish the tradition of African- American farming in the Driftless Region of WI, which in the 19th Century hosted hundreds of black settlers that had moved north with hopes for a bright new life after the Civil War. As of Sept. 2020, this GoFundMe campaign had raised nearly $130,000 to acquire land for a just transition toward a more diverse agriculture and greater Food Sovereignty.

With millions of unemployed renters facing eviction (and farmers confronting foreclosure), other groups have also taken up the challenge to redistribute and decommodify land and shelter. Grassroots campaigns against speculative land grabbing are gaining steam. In Sept. the Orange County, CA Employees Retirement System (OCERS) decided to divest $64 million from the UBS AgriVest Farmland Fund, while students, staff, and faculty at many colleges across the U.S. are confronting TIAA – one of the largest pension funds and landowners in the world – on the same issue.

Homeless advocates, who have been occupying fifty vacant publicly owned properties in Philadelphia for months, just declared victory as the city agreed to transfer the homes to a community land trust under control of Philadelphia Housing Action. Immigrant farmers (90% are women) with the Somali Bantu Community Association recently acquired a 99-year lease to a 107-acre plot in Lewiston, Maine thanks to the Agrarian Trust, with similar “Agrarian Commons” efforts underway cross ten states putting 2,400 acres into the hands of marginalized farmer. On the Menominee Reservation in northern WI, the nationwide tiny homes movement is gaining fresh momentum by offering a safe transition for those recovering from domestic violence and/or substance abuse, with a unique indigenous twist – all the building materials are provided by the Tribe’s own communal lumber operation, drawing from forest managed under the Seventh Generation Principle.

Solidarity During the Pandemic

Even some usually “quiet” people have demonstrated amazing solidarity with this moment. When Amish in Sugarcreek, Ohio heard in April from the Cleveland Clinic that there was a dangerous shortage of protective equipment at the hospital, they organized a sewing frolic and within two days produced 12,000 face masks for essential healthcare workers. Mennonite farmers were so upset by the May 25th police murder of George Floyd that they traveled to Minneapolis to participate in the Black Lives Matter Protests. 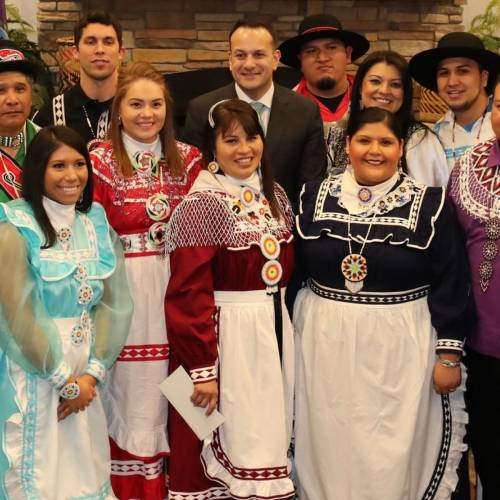 Taoiseach Leo Varadkar meets members of the Choctaw Nation in Oklahoma on day two of his week-long visit to the US in 2018. Photo credit: Niall Carson

When news reached Ireland in March that native reservation in the southwest had become one of the worst Pandemic “hot spots” in the U.S. over half a million dollars was donated by residents of the Emerald Isle to the Navajo and Hopi Families COVID 19 Relief Fund. Apparently, the Irish had not forgotten the generous $170 donation that the Choctaw Nation had made to victims of the Irish Potato Famine way back in 1847. This was reminiscent of the indigenous Sami delegation visit to Standing Rock, ND back in 2016 and their subsequent grassroots campaign that forced the Norwegian State Pension Fund to divest $58 million from the Dakota Access Pipeline (DAPL).

Now is not the time to fall victim to the weary “divide and rule” tactics of those who claim to have power over the rest of us. Whether you are supporting food sovereignty re-efforts to hold police accountable and shift more public funds to vital social services; whether you are pushing to end gerrymandering and resist voter suppression leading up to this election and beyond; whether you are preparing to join the future protests against extreme fossil fuel extractions schemes and taking other actions in support of climate justice; whether you re supporting food sovereignty effort to reclaim food as a basic human right and not leave it in the hands of the hunger industrial complex there is welcome home for you in the growing Solidarity Movement. And if you choose to join us, you may also find many old and new friends and allies along this high road to a better world.