This year marks the 33rd anniversary of the prestigious Goldman Environmental Prize, which honors one grassroots activist (and this year one couple) from each of the six inhabited continents. 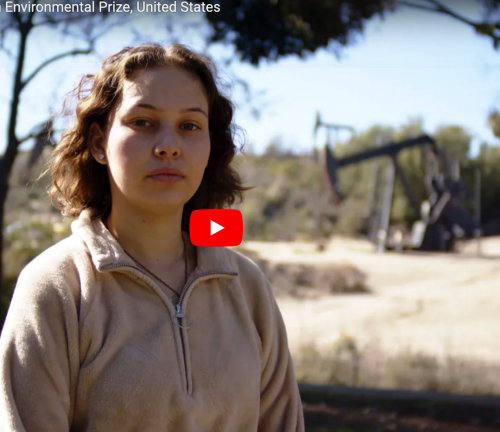 This year’s prize winners are Alex Lucitante and Alexandra Narvaez from Ecuador; Chima Williams from Nigeria; Julien Vincent from Australia; Marjan Minnesma from the Netherlands; Niwat Roykaew from Thailand; and Nalleli Cobo from the United States.

You can “meet” the North American winner, Nalleli Cobo, by listening to the short interview I happened upon yesterday on NPR’s ‘Here and Now’ show. Nalleli’s health was cruelly impacted by the toxic air she breathed in her neighborhood of Los Angeles and from age 9 she began her fight to ensure everyone can breathe clean air. Eleven years later, the Goldman Prize celebrates her activism for environmental justice.

And you can read about all seven prize winners in this article: Meet the 2022 Goldman Environmental Prize Winners from the superb news service – Mongabay: News and Inspiration from Nature’s Frontline. The following is an excerpt from that article, which tells us more about Nalleli and her inspiring story.

Nalleli Cobo, now 20, began her activism at age 9, spurred by physical symptoms from an oil well close to her home in Los Angeles. A cancer survivor, she led a citizens’ movement that shut down an oil drilling site and initiated the process to phase out the largest urban oil field in the U.S.

Los Angeles, California is one of the largest urban oil fields in the U.S. Thousands of active oil wells are hidden throughout this city of more than 4 million people, often in low-income, Black and Latino neighborhoods. Urban oil wells have been clearly linked to asthma and other health problems, and some 580,000 Angelenos live less than a quarter mile (600 meters) from an active well.

One drilling site, operated by AllenCo Energy, was located behind a building 10 m (30 feet) from Nalleli Cobo’s childhood home. The site emitted pollution and she and others suffered from nosebleeds, headaches, and other serious health impacts.

Cobo, now 20 years old, began her activism at age 9, spurred by the terrible smells and physical symptoms from the well. She co-founded People not Pozos, which aims to secure safe and healthy neighborhoods, and the South Central Youth Leadership Coalition, which focuses on environmental racism in the community.

Cobo and her mother began walking door to door in 2011 to distribute information about the dangers of oil extraction. As the community began to organize, she became a central voice, speaking skillfully at events and testifying at government meetings, which garnered press coverage and support from elected officials.

Cobo filed complaints with the South Coast Air Quality Management District, and Physicians for Social Responsibility-LA hired a toxicologist who confirmed that the air near the oil site was polluted. In response, AllenCo voluntarily suspended operations at the site in 2013, a move that was made permanent in 2020.

AllenCo executives now face 24 criminal charges for environmental health and safety violations. In September 2021, the Los Angeles County Board of Supervisors voted unanimously to ban new oil wells in unincorporated parts of the county and examine the status of existing ones.

Cobo was diagnosed with cancer at the age of 19. After surgeries and treatment, she was declared cancer-free but cannot have children as a result of her illness. Despite these hardships, she led a citizens’ movement that shut an oil drilling site and initiated the process to phase out the largest urban oil field in the U.S.

You can read more and watch a four-minute video about Nalleli on the Goldman Prize webpage.

Your gifts to One Great Hour of Sharing and the Hunger Fund support the struggle to end hunger for good! Thank you!