During PHP’s spring advisory committee meeting, we visited one of our newest grant partners, Little Village Environmental Justice Organization (LVEJO) in Chicago. In this predominantly Mexican-American community, their office is located in the Little Village neighborhood and appears to be just another house on the block. When we walked in, the office walls were covered with bright and beautiful artwork and posters filled with affirmations of solidarity with people and creation. The staff warmly greeted us like family with smiles, laughter and even pastries! 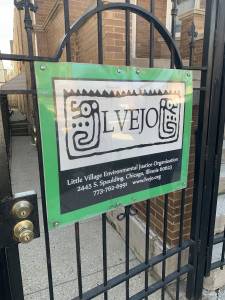 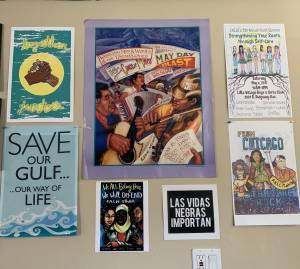 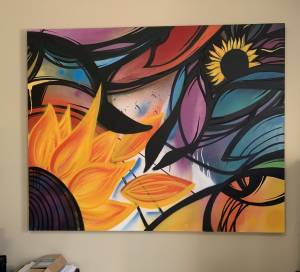 Kim Wasserman, Executive Director, explained that LVEJO uses community organizing skills along with the 17 Principles of Environmental Justice to encourage corporations, government entities, and elected officials to go about development and urban planning with environment and health in mind. LVEJO works alongside the local communities to organize and develop leaders who then advocate for better air quality, remediation of communal land as well as access to land for more public spaces. 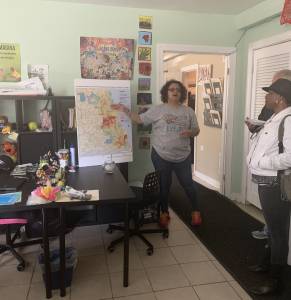 The Little Village neighborhood, like many communities of color, lives with and is affected by the legacy of industrialization which includes environmental racism, poor urban planning, inequitable distribution of public resources, etc. At the same time, these communities often are ignored and even blamed for the challenges they face but didn’t create.

Toxic emissions from two coal plants have contributed to numerous respiratory related illnesses in the surrounding community. After years of organizing, planning, protesting, and even forming a Chicago Clean Power Coalition, both coal-fire plants announced they would be closing! The coalition had advocated for stricter emissions requirements and Midwest, the corporation who owned both plants, decided those enforcements would be too costly. This was a hard-won and long-time coming victory for LVEJO and their community. 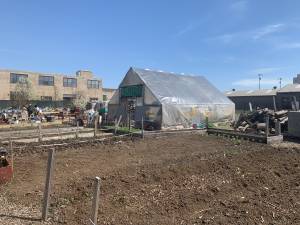 LVEJO is now working to ensure the space in which the two coal plants inhabited is justly transitioned to serve the needs of the community. LVEJO is no stranger to brownfield site transformation. When community members began noticing an oil smell in the area, LVEJO did some investigating. The smell stemmed from a nearby industrial area where oil barrels were abandoned. The community and LVEJO advocated for the site to be cleaned up and eventually transformed into a community garden. When the barrels were finally removed, in order to make additional profit, it is believed that the company intentionally cracked the tanks and dumped the remaining oil, further contaminating the soil so that the metal could be recycled.

Viviano Moreno, a community organizer with LVEJO, explained that the community decided to cap and build on top of the contamination because they didn’t want that toxic material to be dumped in another community, for someone else to have to deal with yet again. We were impressed that this community made this choice, to not pass along their maltreatment to some other place. That speaks volumes! 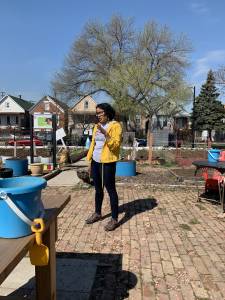 Viviano Moreno educating and leading our group on toxic tour of the area.

So today Semillas de Justicia is a flourishing inter-generational organic community garden of both raised beds and container gardening, a greenhouse, flowerbeds, and even a (sometimes loud) chicken coop. It has become a special gathering place for community pot-lucks, various workshops, and special events – like Earth Day celebrations. Semillas de Justicia is truly a space to be celebrated, rich with diversity, culture, language, and indigenous wisdom in which young and old Little Village residents can live out their fundamental right to clean air, land, water, and food.

It’s so inspiring to hear the stories of transformation and to see the fruits of a small community’s commitment to environmental justice. What is difficult to endure and articulate is the struggle, the waiting, the closed doors. La Villita Park is a 22-acre, beautiful park with two AstroTurf soccer fields, a walking track, a skate park, a playground, several basketball courts and more. Upon visiting the park, you wouldn’t realize that the community and LVEJO organized and fought for 15 years for this green space.

According to the EPA, the Celotex site was used for making, storing and selling asphalt roofing products. Complaints by residents were first filed in 1989. After several years of failed attempts to clean up toxic materials and mitigate flooding to surrounding areas, residents filed additional complaints regarding not only flooding of their property and basements but also concerning skin rashes due to the carcinogens leaching out from the contaminated rain water.

Standing in the middle of the beautiful green soccer field today, you wouldn’t know you were standing on a Superfund site that took 20 years + in order for the site to be properly assessed, tested, remediated, and redeveloped. According to the EPA, before La Villita Park, this South Lawndale Community had an open space deficit but adjacent to the park stands the Cook County Department of Corrections (CCDOC). According to the CCDOC’s website, the jail covers ninety-six acres and 8 city blocks. It’s one of the largest single-site jails in the country and approximately 100,000 individuals circulate through annually. The daily jail population averages 6,100. 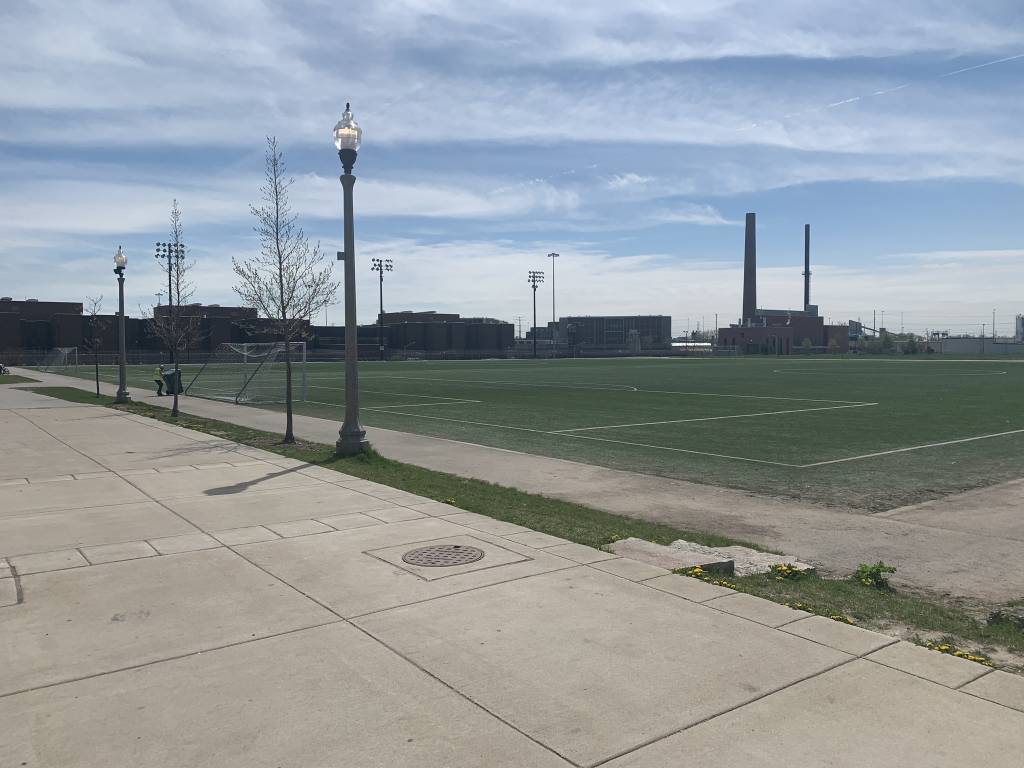 La Villita Park with Cook County Dept. of Corrections in the background.

As we walked around the park, we could see the inmates and they could see us. It felt wrong. Wrong for so many reasons. Wrong that the inmates had to see me walking free and I had to see them locked up. Wrong because that traumatized us both. Wrong that so many black and brown people are over-policed and under resourced. Wrong that the CCDOC has so much more land dedicated to the incarceration of black and brown people than there is public green space for people to live, breathe, and be in community.

On the other hand, it felt right. Right that a community, who has endured so many injustices, finally sees some justice. Right that children have somewhere to go outside and play. Right that families can gather for soccer and basketball games, farmer’s markets, and other events in a space where they can take ownership and pride in. And most of all, right because the community and LVEJO are pushing back on the dominant narrative that sits right across the street, under their feet, and even in the air they breathe. It felt right because the work of LVEJO is grounded in the belief that intergenerational leadership sustains community self-determination, those directly affected have the solutions to solve their own problems, and by building upon the existing assets and resources, the community has the power and agency to transform society. 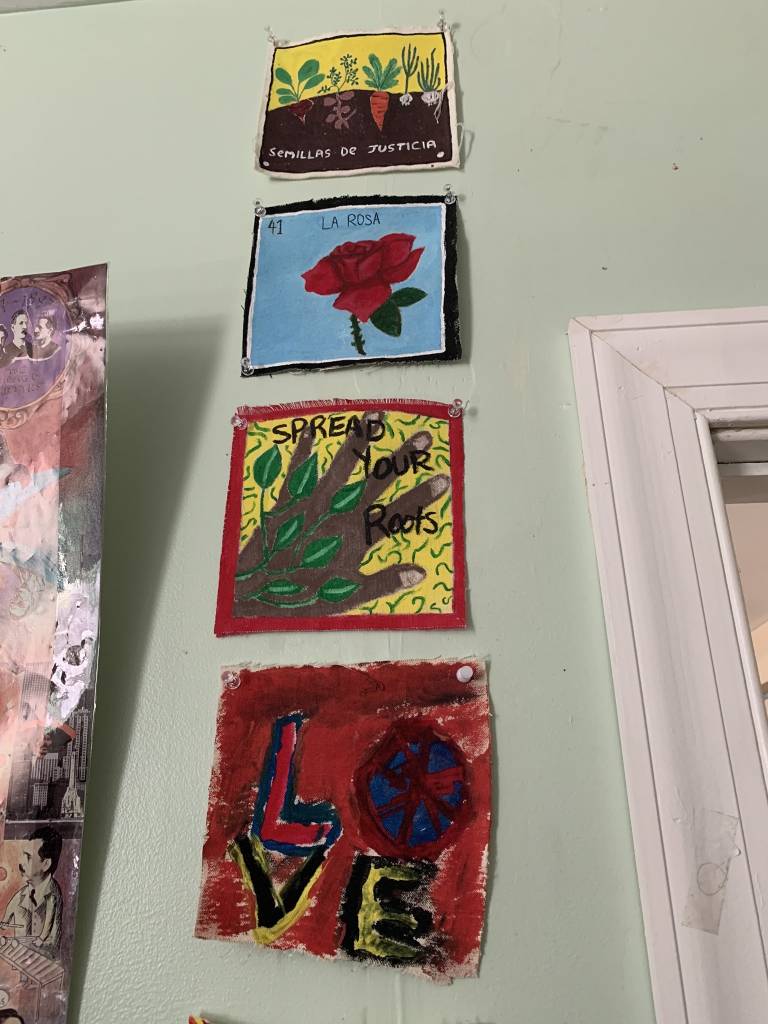