April 29: Presbytery of the Cascades

An incredible 40 percent of food in the United States is wasted, but the Mission Ministry of First Presbyterian Church, Vancouver, Washington, lowers that figure for its community. 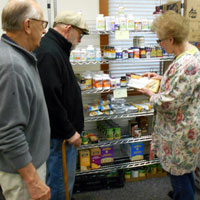 In 2013, members of the congregation partnered with a local grocer, picking up donated produce, baked goods and deli items nearing their “sell by” date to fill food boxes weekly for five families referred by a neighborhood school. The program grew quickly and was named H.E.L.P., which stood for Healthy Equitable Living Project. It acquired three more donor grocers and some individual sponsors, and now four schools refer food-insecure families.

What began as handing out a few food boxes in the church parking lot has morphed into a pantry resembling a little food mart inside the building. Almost 30 families “shop” each week—more than 1,000 families, totaling 5,000 individuals each year. Clients also volunteer, some to set things up and others to make coffee, put out fresh produce and serve juice and cookies to the children.

The project is multicultural in food offered and in clientele, many of whom speak Russian or Spanish. They now eat well, no longer having to choose between feeding the family and paying the rent. They also take cooking and nutrition classes offered through a partnership with Washington State University. Another partner, Hunger for Success, helps them get connected and educated. The H.E.L.P. project truly gives them hope for their family’s future in their adopted country.

God of generosity and abundance, help us to be better stewards of the bounty of the earth. Give us the imagination to see how we can share that bounty, the courage to speak up and reach out, and the faith to persist in the face of obstacles. Amen.