As a Presbyterian Church (U.S.A.) Young Adult Volunteer in Mombasa, Kenya, Anni Reinking worked in a home for girls and among street boys. Upon her return she preached a sermon titled “God Loves Garbage People” at First Federated Church in Peoria, Illinois. As she related the stories of the boys who live on the streets, something stirred within the heart of the congregation’s Mission Committee moderator. She told the committee that before they had known about the plight of the boys half a world away, that plight could be ignored. But now that the congregation knew of the plight, she said, they had to respond in the spirit of Christ. 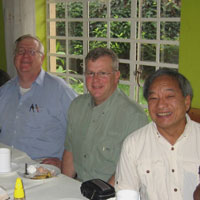 Over the next three years Senior Minister Forrest “Frosty” Krummel and the committee researched the viability of planting a home for the “street boys.” Finally Drs. Fred Hoy and John Nixon accompanied Dr. Krummel on a three-nation “due diligence” visit. Cornerstone Development of East Africa agreed to be a supervising partner. The result was Wana Wa Mola, a Swahili phrase that means “Child of God.” Those who were once known as “garbage children” are now acknowledged as “children of God.”

Under the direction of Daniel Okiror and his wife, Mirjam, Wana Wa Mola provides a safe group home for children who previously did not know where their next meal would come from or where they would sleep. In the home the children learn how to live together using the principles, practices and precepts of Jesus.

Since its founding, the churches in Great Rivers Presbytery have joined First Federated Church in the support of this ministry that not only changes the lives of “the least” but also the future of Kenya.

Lord God, give us the vision that sees each person we meet,
especially the least, the last, and the lost, as a precious child, your child.