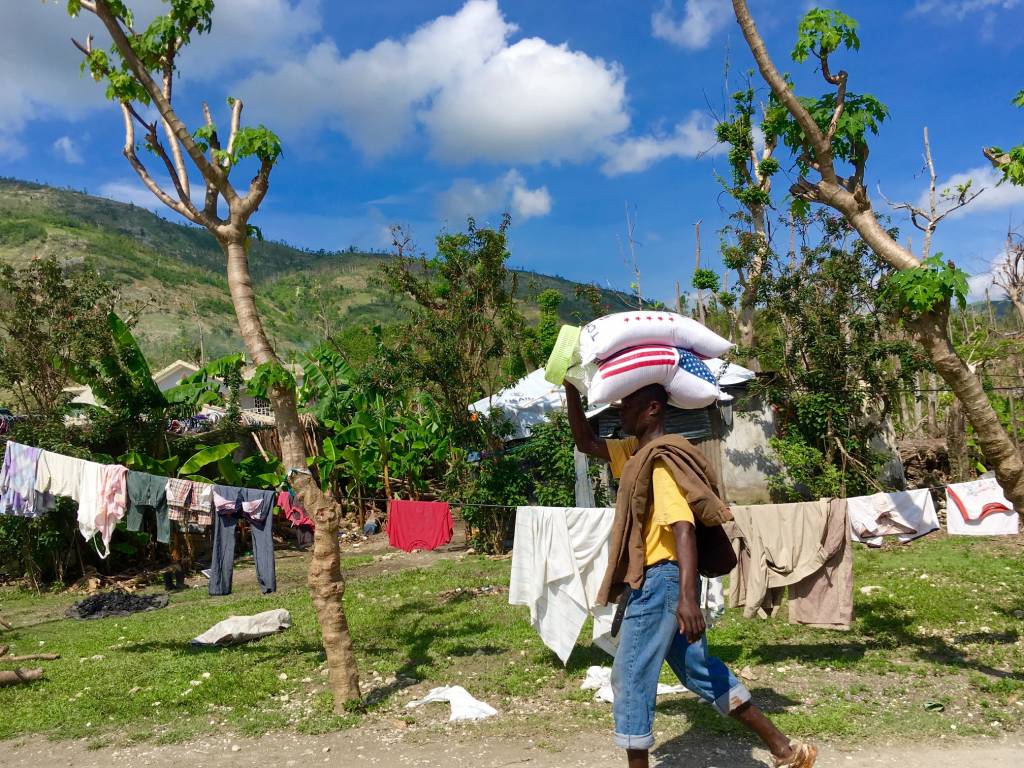 A man carries bags of rice six weeks after Hurricane Matthew devastated much of the southern coast of Haiti in October 2016. Food imports, natural disasters, forced displacement and government corruption all contribute to the country’s deep poverty. Photo by Cindy Corell

One in three people in Haiti have no idea how to find their next meal, a decline from already dire statistics of hunger.

That conclusion was reached by researchers for the United Nation’s World Food Programme, studying data in October as massive, violent protests entered their seventh week across Haiti. The situation is approaching famine proportions.

While the U.S. has promised 2,000 metric tons of food for Haitians, staff struggle to determine how to deliver it.

Haiti’s poverty is legendary, as are its violent protests. Few people are surprised when they hear of either. The people of Haiti are well into the third month of heavy protests, unable to work or obtain basic needs such as food and clean water.

Since late August, much of the capital city of Port-au-Prince and other population centers have been blocked in what protestors call “Peyi lok” or country lock. Roads blocked by protesters, feuding gangs or other violent criminals prevent resources from reaching stores and street markets.

Some regions are experiencing a humanitarian crisis. 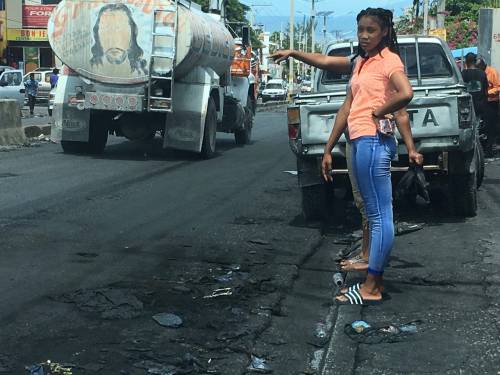 By mid-November, the protests calmed down overall with pockets of political unrest, but the criminal and gang elements are continuing.

Leading into the holiday season, leaders of FONDAMA, the Joining Hands network in Haiti, aren’t hopeful that the calm will continue, especially because there is no indication of a legitimate investigation into government corruption.

Dozens of people have been killed, and Amnesty International has called on President Jovenel Moise to address human rights violations by national police on protesters.

In 2009, a group of grassroots Haitian organizations joined a network called FONDAMA (the Haitian Creole acronym for Hands Together Foundation of Haiti), setting out to unite with other platforms addressing root causes of the country’s poverty and advocating for a better path.

Over the past 10 years, FONDAMA’s member organizations have identified these root causes:

The crux of the current instability is a standoff between President Jovenel Moise who is halfway through his five-year term and opposition parties and advocacy groups demanding his departure.

It has as its contemporary root the July 2018 protests of a sudden sharp fuel price increase and a budding fury about billions of dollars stolen from government funds earmarked for social programs the people of Haiti desperately need.

But the roots of today’s protests run far deeper.

Examining the root causes of Haiti’s poverty means delving deep into the tiny nation’s history, and it is complex. It starts, of course, with Christopher Columbus and early colonization by the Spanish, and then by the French. 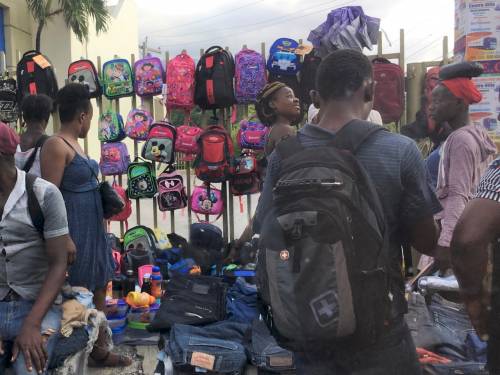 In the weeks leading up to the months-long protests, parents scoured street markets for school supplies. Schools nationwide were to open on Sept. 9, but most have tentatively opened in mid-November. Photo by Cindy Corell.

By 1720, the French were bringing in 8,000 African slaves each year. Harsh working conditions, brutal treatment and overwork killed many slaves not long after they had arrived.

As the wealth grew, more sugarcane was demanded, and in turn, more slaves imported. In 1787, 450,000 slaves worked for the great wealth of their masters on the island.

Several years later, slaves and those who had escaped into the high mountains, began fighting for their freedom.

The successful revolution in which those once in bondage defeated the French army became a clarion call for freedom for slaves in other nations. The wealth of their work would not become their own, however.

The countries trading for the sugar and coffee from Hispaniola refused to recognize this first black-led republic.

One of Martelly’s first declarations he made as president, just a year after the enormously deadly earthquake of January 2010 was: Haiti is Open for Business!

And what followed were major land-grabs, displacing thousands of families and offering them little in the way of profit-sharing from the export businesses, industrial parks and other concerns operating on the taken land.

The government did little in the way of environmental protection, and the country continued to be devastated by storms, including Hurricane Matthew in October 2016 that destroyed many crop lands in the South. 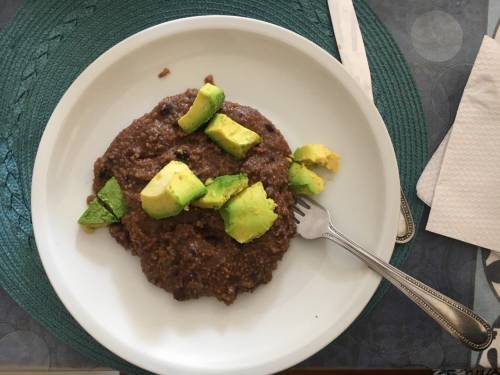 During a time of economic and political insecurity, it is extremely difficult for a family to enjoy even a simple meal of cornmeal with beans, topped in avocado. Photo by Cindy Corell.

The land grabs and natural disasters mean fewer acres of arable land, less produce and more imports. Inflation continues to rise at a dramatic pace. Paths to other countries where young Haitians have emigrated have been closed, so there are more hungry people searching for fewer jobs.

In 1980, Haiti was growing enough food to feed itself. Since the 1990s, it has relied on imported food, most of it from neighboring Dominican Republic, but also the U.S.

There is no doubt that today’s violent unrest and political standoff is a direct result of entrenched government corruption. But the fact that it comes on a people already suffering under deep inflation, a devalued currency, lack of security and fuel shortages makes the vulnerable even more so.

FONDAMA continues its mission to develop advocacy and informational campaigns, partner with U.S. churches and provide support for those in the more dire circumstances.

The reality of Haiti is still far from the vision FONDAMA and its member organizations imagine, a country where its hard-working, faithful people are able to work for a fair wage, raise their own crops in a sustainable manner and care for their families.

It is the vision most of us have in our own lives. The people of Haiti, whose ancestors brought freedom to so many, deserve that and more.