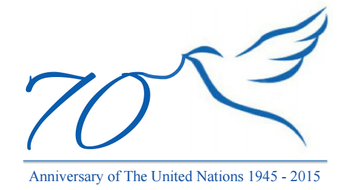 June 26 marks the 70th anniversary of the signing of the UN Charter. It set the stage for the ratification of the UN Charter which was completed October . It is, as Secretary-General Ban Ki-moon remarked:

an opportunity to reflect – to look back on the UN’s history and take stock of its enduring achievements. It is also an opportunity to spotlight where the UN – and the international community as a whole – needs to redouble its efforts to meet current and future challenges across the three pillars of its work: peace and security, development, and human rights.

The Charter of the United Nations was signed on June 26, 1945 in San Francisco. Throughout its existence, the UN has worked to make a positive difference around the globe through its humanitarian work: vaccinating children, distributing food aid, sheltering refugees, deploying peacekeepers, protecting the environment, seeking peaceful resolutions of political disputes, and more.

To commemorate the signing of the original charter as well as the ongoing humanitarian work of the UN, there was a public ceremony held at City Hall in San Francisco, with attendees measuring some 1,000 diplomats, students and community members. This ceremony was broadcast to the UN headquarters in New York City. The celebrations on both sides were exuberant, and the speakers included the mayor of San Francisco Ed Lee, governor of California Jerry Brown Jr., Minority Leader of the United States House of Representatives Nancy Pelosi, and Secretary-General of the UN Ban Ki-moon. The celebrations were also bolstered by the the recent Supreme Court decision to legalize same-sex marriage throughout the United States.

While today we celebrate, we also remember that there is much work left to be done. The past 70 years of UN work has shown us that a humanitarian world is not beyond our reach. Hard work, critical thought, a commitment to justice, and compassion for others: these are what have and will continue to sustain us in our labors. Let us continue to build on the best of our institutions, traditions, and ideals as we work for a future in which no one is beyond the reach of justice.

Two years before the signing of the Charter of the United Nations, the 155th General Assembly (1943) of the Presbyterian Church in the United States of America stressed the importance of an international community that would “preserve peace, maintain international law and provide adaptations to changing conditions.”

Over the past 70 years, Presbyterian General Assemblies have consistently called for support of the United Nations and its programs, recognizing that all institutions stand in need of reformation. Presbyterians have engaged with the United Nations at all levels, urging its international representatives to find unilateral and peaceful solutions to global poverty, hunger and unemployment; advocate for economic development and educational opportunities and work with governments and organizations to combat disease and human rights violations.