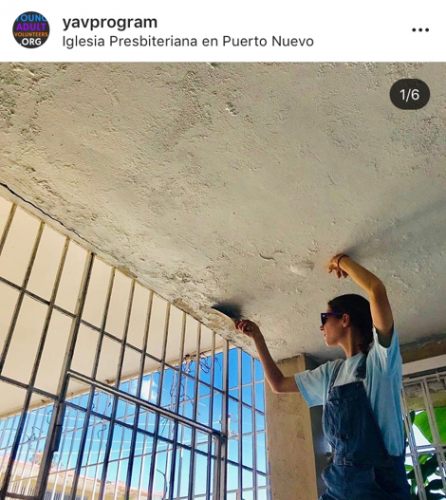 From December 10-17, alum spanning from the 1999-2000 service year to as recently as 2016-17 (with many years represented in between!) met in San Juan to celebrate collective years of service while putting shared experiences into action and accompaniment. 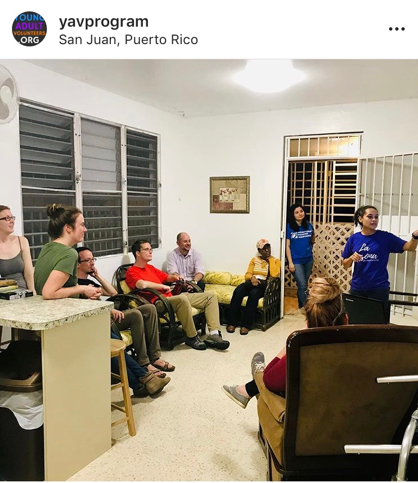 The group assisted in repairing office space, meeting rooms and classrooms at First Presbyterian Church of Puerto Nuevo (Primera Iglesia Presbiteriana (EUA) en Puerto Nuevo). First Presbyterian suffered outer-roof and land damage after the hurricane. Recovery efforts are helping the congregation to reimagine building spaces as it transitions from its 54-year history as a secondary school in the community. 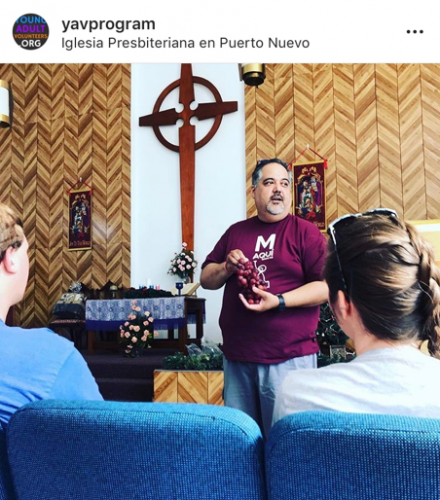 The Rev. Richard Rojas, stated clerk of the presbytery and pastor of Primera Iglesia en Puerto Nuevo, offers the group words of welcome and local nourishment during their first day of work. (Photo by Blake Collins) 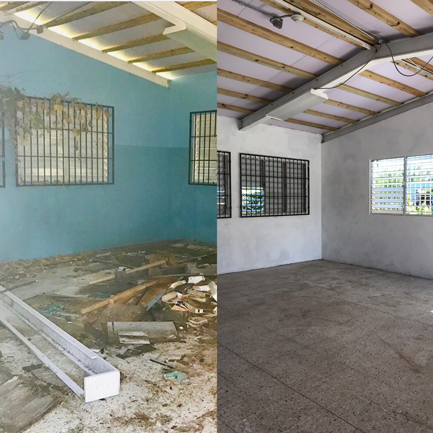 A before and after look at classroom space. New roofing was put in place from local construction workers using a PDA loan grant. (Photo by Blake Collins)

During meal times, the group listened to testimonies including the history of the island and how churches continue to recover. For example, Rev. Raúl Santiago, presbytery moderator and pastor of Rosa Gonzales Presbyterian Church, explained how half a million Puerto Ricans leaving the island, including working middle-class and church members, continues to have ripple effects on the economy and church membership as well as reimagining outreach efforts. “Following Maria,” Santiago said, “congregations are relearning that church happens outside of the four walls of the temple, and that has been a blessing.”

Caridad Torres, moderator of the Presbyterian Women, alongside other PW members discussed continued efforts to meet community needs, including a monthly meal hosted by Puerto Nuevo Iglesia, the Rise and Shine (Levántate y Resplendence) program — a commission from the Presbiterio de San Juan focusing on relief after Maria — as well as addressing the root causes of domestic violence, which has increased since last year, and human trafficking awareness.

The group also learned how Puerto Rico’s economic history has created barriers to growth and recovery. Longstanding and current policies, such as the Jones Act, along with U.S. Congress holding much of the influence determining Puerto Rico’s statehood, independence, or bettering current relations, all contribute to a deep dependence on the United States. It is easy to imagine how this dependence can be problematic as U.S. officials still struggle to agree on reported death tolls from Maria, and continue to politicize the number.

“It’s frustrating to me how little I knew about the relationship between Puerto Rico and the U.S. before this trip,” said alum Mary Kate Bevel (Peru, 2013-14). “I’m grateful for the opportunity to learn firsthand about the complexities of that relationship.”

Following time in San Juan, the group traveled to Campemeto El Guacio. While there, the group met with Margaret Mwale, Associate for Community Development and Constituent Relations for

The Presbyterian Committee on the Self-Development of People (SDOP), and Andrew Kang Bartlett, Associate for National Hunger Concerns for the Presbyterian Hunger Program, to learn about continued holistic approaches to long-term recovery and sustainability. Margaret and Andrew both shared about the amazing resilience they witnessed from local communities as well as innovative ways to grow food, farm local produce and reimagine sharing practices as many farmlands suffered devastation last year. 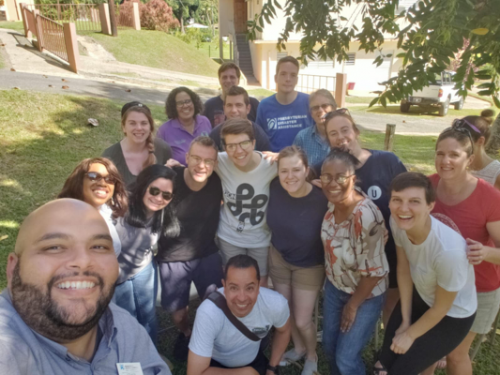 Wilmari Vargas, director of Campemento El Guacio, discussed El Guacio’s amazing transformation from camp to community center to a combination of the two following Maria. Based on donations from PDA and local Presbyterian churches in the U.S., El Guacio was able to provide water, on-site washing and drying machines, and ice to the entire community of San Sebastian. Vargas told the group, “Sometimes we see God in the big things, but we have seen God appear in the small things, such as a little cube of ice.” This allowed folks nearby to wash clothes, freeze food and become acquainted with one another during times of struggle and uncertainty. 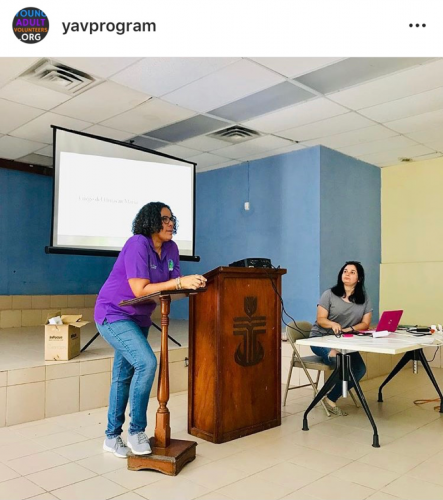 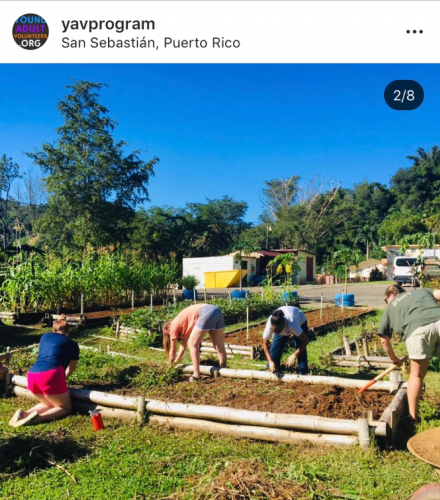 Helping prepare a gardening bed during the retreat portion of the trip at El Guacio. (Photo by Blake Collins)

“A gathering such as this was the first for our program,” said YAV director and two-time alum Richard Williams (Philippines, Nashville, 1999-00). “It was a joy to celebrate alongside the many classes represented by the alum present, but also actively walk beside neighbors in our faith,” adding, with a laugh, “it was also nice to celebrate an anniversary outside of a hotel ballroom.” 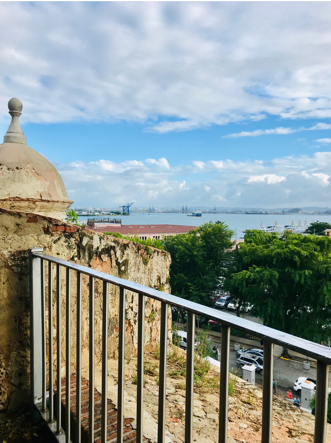 A view in Old San Juan.  (Photo by Blake Collins)

On the final day of the trip, the group explored Old San Juan to admire Puerto Rican artisans’ holiday creations and support local restaurants and vendors. 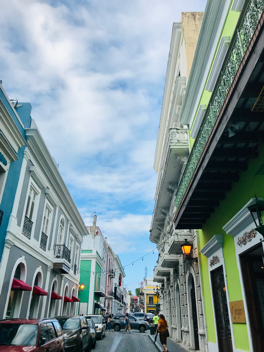 A view in Old San Juan.  (Photo by Blake Collins)

Leaving the tourist part of the city, the group reflected on the words of Edwin González-Castillo’s, PDA associate: “San Juan is a part of Puerto Rico, but it is not all of Puerto Rico. There are still many communities, many farmlands, many people suffering more than a year after the hurricane. Go back and share this story, learn Puerto Rico’s relationship to the U.S., and advocate for continued relief and fair policies.” Amen — and may it be so!

The Young Adult Volunteer (YAV) program is an ecumenical, faith-based year of service in sites around the world and across the United States. Volunteers, ages 19-30, accompany local agencies working to address root causes of poverty and reconciliation while exploring the meaning and motivation of their faith in community with peers and mentors.