…be led forth in peace. (Isaiah 55:12). Support to the Peace & Global Witness Offering.
Make A Donation Click Here >
Home › ‘When we can’t trace God, follow God’ 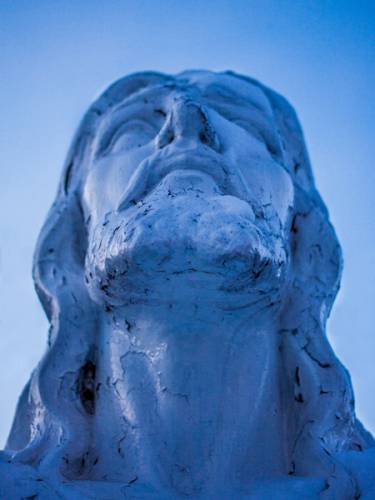 LOUISVILLE — “I bring you greetings from the Presbyterian Church (U.S.A.),” the Rev. Dr. Diane Moffett told the online audience of St. Stephen Baptist Church in Louisville on Sunday. Moffett was the featured speaker during the church’s Women’s Day celebration. “We are your partners in ministry,” said the president and executive director of the Presbyterian Mission Agency. “God has called us to preach good news to the poor, recovery of sight to the blind, to set at liberty those who are oppressed.”

“We [the PC(USA)] are seeking to be a Matthew 25 church that does the work of God and for those on the margins to become the center of ministry,” she said. “And we ourselves know what it means to be the least of these as we go against the empire and structures that sometimes get in the way of our liberation and our salvation.”

Moffett used Mark 5:21-43 as the focal Scripture for her message titled “Resilient Faith.”

“Psychologists define resilience as the quality that allows people to be knocked down and get back up when hit by the adversities of life,” said Moffett. “Resilient faith is faith that encounters doubt and still believes. It is faith that can take a licking and keep on kicking. It’s a gift from God and available to all who will receive it.”

Moffett went on to explain that resilient faith is faith that knows that facts are not always final when trauma and trouble punch and push them up against the boxing ropes of life. “People with resilient faith come back swinging,” she said. “They rise because they’re moving towards a future that is beyond what is seen with the naked eye, a future that inspires them to work today for a better tomorrow — not just for themselves, but for other generations to come.”

“This unnamed woman in our Scripture today demonstrates resilient faith,” according to Moffett. “She has no name, but I invite us to give her one. Think of the women in your life who demonstrate resilient faith,” who “told you the stories and nurtured and mentored you in faith like this of the unnamed woman in our Scripture. We can see people with resilience,” she said.

While the Bible does not say why the woman in the featured text had been bleeding for 12 years, Moffett suggested that her condition could have be caused by any number of issues that continue to impact women today. 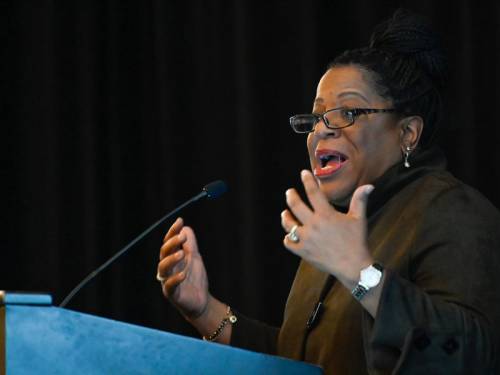 “Blood represents life, which means that life has been seeping out of her for 12 years,” said Moffett. “She may be bleeding from a childhood incident or accident that made the little girl in her die. She may be bleeding because when we are young, we don’t always know where to find the answers to our problems and we make some wrong choices. We hook up with the wrong people or friends who bring more trauma and trouble into our midst.”

Moffett says the woman could have been bleeding from the state of her relationships — from the bruises of domestic violence, which statistics indicate one in four U.S. women will experience at some point in her life.

Other issues Moffett identified for the woman’s bleeding that also adversely affect women are divorce, homelessness and unequal wages. “She may have been part of the overworked and underpaid Black women who make only 64% of each dollar white men make,” said Moffett.

“Maybe she’s bleeding over the state of the world. From the grief caused by unexpected deaths of loved ones, stricken by COVID-19 or some other disease that is disproportionately affecting Black people who are almost twice as likely to die from the coronavirus. Maybe she’s bleeding because she is angry and hurt over the violent murders of Breonna Taylor and George Floyd.”

Moffett noted that other possible reasons for the woman’s hemorrhaging could have been for those who died from the violent actions of police officers and white vigilantes, or the rise of vicious attacks and witnessing the shooting of eight Asian siblings last week in Atlanta, six of whom more woman. [The sermon occurred before Monday’s mass shooting in Boulder, Colorado.} “Like the COVID-19 virus, racism spreads and mutates. Or maybe she’s screaming ‘Black Lives Matter’ in a world that refuses to give liberty and justice for all,” she said.

Referring to Dr. Joy DeGruy’s book “Post Traumatic Slave Syndrome,” Moffett commented, “Dr. Joy DeGruy says, ‘I believe that it’s the secrets that make us sick and that white America’s greatest pathology is her denial of all the vicious, racist, hateful acts embedded from the inception of this nation.’”

In her book, DeGruy describes P.T.S.S. as a theory that explains the etiology of many of the adaptive survival behaviors in African American communities throughout the United States and the Diaspora. It is a condition that exists as a consequence of multigenerational oppression of Africans and their descendants resulting from centuries of chattel slavery, a form of slavery which was predicated on the belief that African Americans were inherently and genetically inferior to whites. This was then followed by institutionalized racism which continues to perpetuate injury.

“Like women of today, [the woman in Mark’s gospel] pressed on,” said Moffett. “She is steadfast and immovable.”

Quoting the lyric made famous by one of the country’s most beloved trios, Destiny’s Child, Moffett said, “She’s a survivor.”

Moffett says the woman in the biblical story teaches women of all ages as well as men what it means to have resilient faith, faith that sustains you when you don’t know how to get through to on the other side.

“She invites us to have a perspective. It is a faith perspective,” noted Moffett. “You see trials come on every hand. We can consider the issues of life an invitation for the application of our faith and resolve to keep pressing, trusting that in time all shall be made well. We may not see it, but all shall be well.”

“What impresses Jesus is our faith journey,” Moffett said.  “It’s not simply the destination, it’s how we keep faith. When the healing does not come, or the situation does not turn out like we hoped, it is faith that causes us to trust God. And, when we can’t trace God, follow God.”