Make A Donation Click Here >
Home › What can be done to resolve the nation’s gun violence problem? 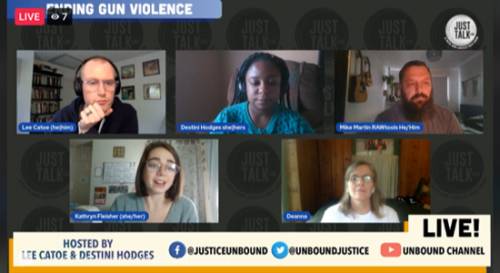 Tuesday’s episode of “Just Talk Live” focused on gun violence, why it occurs and ways to address it. (Screenshot)

LOUISVILLE — Near the end of Tuesday’s episode of “Just Talk Live,” peace activist Kathryn Fleisher reflected on how community members united after a mass shooting at Pittsburgh’s Tree of Life Synagogue in 2018.

“I watched our city come together and stand behind the Jewish community in a way that I hadn’t seen” before, said Fleisher, executive director of Not My Generation, a nonprofit organization focused on gun violence prevention advocacy for young adults.

“I think, especially our Muslim brothers and sisters in Pittsburgh, really, really came out and showed up for us and it really showed me the power of faith-based advocacy and interfaith coalitions and what we can do when we embrace the center of all of our doctrines [which] is to love thy neighbor,” she said. “And that means not just showing up for one another after a tragedy but having enough love for one another to work together, day in and day out, to build safer communities.”

Fleisher was one of three guests on this week’s episode of the Presbyterian Church (U.S.A.) webinar series hosted by the Rev. Lee Catoe and Destini Hodges. Rounding out the guest list were the Rev. Deanna Hollas, Gun Violence Prevention Ministry coordinator for the Presbyterian Peace Fellowship, and Michael Martin, founder and executive director of RAWtools, which turns guns into garden tools and does other work to move communities away from violence.

The show was prompted by continued mass shootings, legislative efforts around the country to weaken gun restrictions, and the need to help people of faith be part of conversations on these kinds of issues, Catoe said.

Fleisher said it’s important to acknowledge the issues that have led to much of the country’s gun violence problem, which many have deemed a public health crisis.

“We truly are at epidemic proportions in terms of deaths and injuries from gun violence each year,” she said.

Hollas, who’s fighting a Texas bill that would allow guns to be carried without a permit, spoke about some of the factors behind gun sales and the lack of tougher gun laws. Among other things, she pointed to capitalism and gun industry profits.

“Our lawmakers that are beholden to gun industry profits continue to make guns as available as they possibly can because it’s really hard to sell a non-consumable product in a saturated market,” Hollas said. “In this country, we have more guns than we have people.”

Hollas listens to and coordinates with different people within the gun violence prevention movement and helps the church be informed and active when it comes to preventing gun violence.

She said it’s important to hear those heavily affected by gun violence, including people of color, women and children. “That’s what we’ll be doing over the next year is really starting to listen to folks to rethink what the PC(USA) policy might look like to be more encompassing of those that are impacted.”

Martin, whose organization was formed shortly after the Sandy Hook shooting, noted that victims’ loved ones and the survivors of gun violence grapple with aftereffects for the rest of their lives.

“We need healthy ways to bring our pain to speech,” rather than punching a wall or buying a gun, he said.

After a mass shooting in Boulder, Colorado, RAWtools helped the community to vent by holding an event in which people could release their grief, anger and pain by helping to create a garden tool.

For those who want to become involved in reducing gun violence, Fleisher suggested making use of resources, such as the Annual Gun Law Scorecard by the Giffords Law Center, to spot where your state needs improvement and to determine where to focus your advocacy.

There’s a lot of power in being able to walk into an elected official’s office to tell them about your faith and the actions that you believe can prevent gun violence and lead to more faithful, loving, compassionate living, Fleisher said.

“The faith community has a really incredible opportunity here to stand up and to take the chance to be the mouthpiece for this work that often gets relegated to a hyper-partisan box, where it gets stuck, which is exactly what the people who sell the guns want to happen,” she said. “So be part of disrupting that.”