Editor’s note: Cynthia White served as coordinator of SDOP prior to her retirement in 2016. This story has been updated since her retirement. 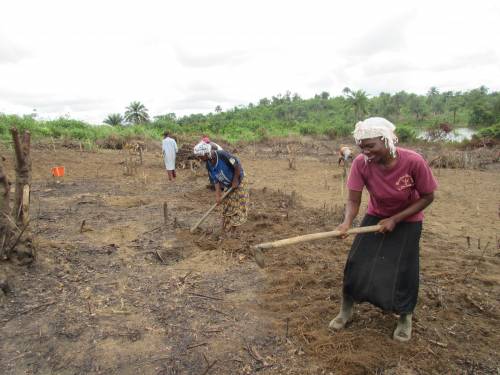 Preparing land for farming in Liberia

Communities in Liberia and Sierra Leone are being transformed. Over 10,000 people, in 45 communities, now have sufficient food for their families as well as opportunities for economic empowerment through the West Africa Initiative.

The program, which started in 2006, is a joint venture by Presbyterian Committee on the Self-Development of People, Presbyterian Disaster Assistance, and Presbyterian Hunger Program.

The West Africa Initiative helps families and farmers grow food to sell and use to create incomes to support families and individuals. It started with training for persons identified as having leadership abilities. Training included sustainable agriculture, bookkeeping and how to run a meeting ― practical training on how to assist community groups. The persons receiving the training are called facilitators. The facilitators then go back to their communities and provide the training to community groups in that area. The groups or individuals start projects, the majority of which are farming.

Most people in the program grow cassava, groundnuts and rice. Some are now cultivating moringa, a medicinal tree, and others are beekeeping for honey. The latter phases of the initiative have included economic development activities, including selling palm oil and learning medicinal benefits of moringa.  It is used it to lower high blood pressure and it can also be used on snake bites.

In its mid-year 2016 report, the West Africa Initiative coordinators said the area is making a remarkable comeback following the Ebola crisis. With favorable weather, crops in the area are expected to exceed 2014 yields. Just so far in 2016, 9,361 people have benefited from the program.

One larger effort of the initiative that has since been curtailed is playing a significant role in the efforts to contain Ebola, which ravaged West Africa in 2014. As credible community based organizations, West Africa Initiative partners established hand washing stations, supported dry season farming which enabled community food security and provided micro-credit for members and school supplies for children.