Christmas Joy Offering – Supporting our leaders: past, present and future.
Make A Donation Click Here >
Home › Welcoming Afghan refugees is nothing new to this California church 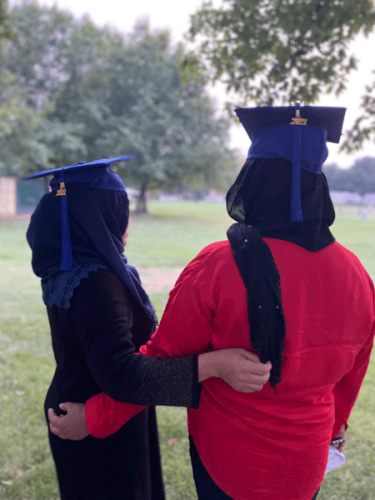 Participants in Carmichael Presbyterian Church’s English as a Second Language program are pictured at graduation. The graduates’ faces are hidden to protect their privacy. (Photo by Heidi Guttschuss of World Relief)

LEXINGTON, Kentucky — An undercurrent of fear ran through the celebration for graduates of English as a Second Language classes conducted by the refugee resettlement agency World Relief at Carmichael Presbyterian Church in Carmichael, California, a city 11 miles northeast of Sacramento.

It was a huge accomplishment for Afghan refugees, particularly with the added difficulty of taking the classes virtually during a pandemic. But coming in late August, Carmichael church member Kathy Lewis says the participants were worrying about loved ones in Afghanistan as the U.S. military withdrew, including people from the Carmichael community who had gone back to visit for the summer.

The community, largely made up of people who got out of the country on Special Immigrant Visas (SIV) because they had worked with the U.S. military, was now gripped with concern about whether they would see their families and friends again as the United States left and the Taliban took control of the country.

Carmichael’s tradition of welcoming refugees goes back to the 1990s, when the area was primarily seeing people coming in following the dissolution of the Soviet Union. In recent years the population in the neighboring Arden-Arcade community has shifted to Afghan refugees, and a group of people from the church met with World Relief staff to see how they could best serve the new residents.

“The model is if there is a refugee resettlement agency in your area, to work with them,” Lewis said. “They know best what the needs are.”

When they were told English as a Second Language (ESL) classes were needed, and that one of the barriers to taking those classes was child care, church members worked to convert space from a now-defunct nursery school program into classrooms and child care staffed with volunteers. There were some lessons learned about things such as taking care of children who had never been away from their mother before. But Lewis says the program got off to a successful start.

The Rev. Ivan Herman, the church’s associate pastor, said Carmichael also developed a teen outreach that allowed students to come gather at the church in groups separated by gender to play soccer and hang out.

“That was really important, especially for these teen girls, to have a safe space that they can gather with one another and not be responsible for younger children, younger siblings and not have to spend that hour translating or interpreting for their parents,” Herman said. “They were really able just to come in and have a safe space, and they were welcomed in the church, and they knew that.” 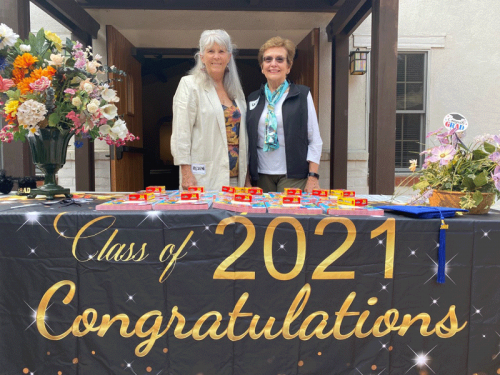 The COVID-19 pandemic changed everything. The ESL classes went online, but the need for childcare during lessons remained. Lewis said the team at Carmichael adjusted, putting together activities for the children that could be done safely outside with a volunteer while the classes went on. Or there were video lessons the children could watch while their mothers attended class, completing activities with materials church volunteers had delivered to their homes.

Click here to see a video about Carmichael’s ESL program

Lewis says it has been important to have a committee for Carmichael’s refugee work and it has attracted new volunteers.

“It’s really kind of exciting that we’re not just cycling people through that volunteer for everything,” she said. “And we’re an aging church, so with this, we’re bringing in some younger people.”

Volunteer interest has surged with news of the U.S. military withdrawal from Afghanistan and news that evacuees are coming to the United States. Lewis said that volunteers go to World Relief, and then the agency sends Carmichael people who are interested in their programs. Volunteers don’t have to go to the church, Lewis said. They just have to pass a background check with World Relief.

The church itself is not directly involved with resettlement programs for new arrivals, though members are participating in that work through World Relief. Herman also said the church is devoting its portion of the just-received Peace and Global Witness Offering to supporting Afghan refugees in the community.

The church’s focus is maintaining its existing programs, though that has certainly given them opportunities to support people through the difficult and uncertain times of the withdrawal both in private and public expressions.

Herman notes there was a service the church hosted with World Relief to pray for Afghanistan during the withdrawal.

“We kept it kind of as a nonsectarian prayer time, just recognizing the needs of the community,” Herman said. “But we had a number of different congregations represented, and we’ve seen folks come and just appreciate that they’re being loved and cared for, and their community’s not being forgotten.”

Lewis said a man she was helping prepare for his driver’s license test was desperately working with his military contacts to try to get family members out of Afghanistan.

Working with the Afghan community has helped Carmichael learn to be a church that does things with its neighbors as opposed to doing things for people. And that perspective makes moments like that graduation particularly sweet, even if it was a tense time.

“It’s really working, respecting their culture, and doing it because that’s what Jesus wants us to do,” Lewis said. “That’s the why.”