It has been a long time since the Presbyterian Committee on the Self-Development of People (SDOP) first heard from The Community of San Luis, Aguacayo  in El Salvador. It was in 2002 when this community group sent their request for funds to install a water system for 57 families. The community members had not had access to running water since returning to their village that they were forced to flee because of military attacks during the war in the mid 1980’s. After the conflict most of them came back home and repopulated in defiance of the military threat, but they faced lack of running water. Their water system had been destroyed by the war. The community members now had to walk one and half miles to buy water. 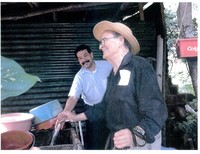 A community leader is showing the faucet with the running water.

In 2003 the Presbyterian Committee on the SDOP awarded a grant of $20,000 to the group to start a water project in Aguacayo. On July 16, 2005 the Community of San Luis Aguacayo inaugurated their community water system.
Many people and institutions from US and El Salvador collaborated to make this dream a reality, such as: Community of Aguacayo; Committee for Reconstruction and Socio Economic Development of the Communities of Suchitoto (CRC), Salvadoran Foundation for Reconstruction and Development (REDES), the Presbyterian Committee on the SDOP, Suchitoto Municipality Government, Rotary Club International, The Rotary Clubs of Indiana (Evansville, Brazil, Greenscattle, Vincennes, Gasper& Brownsburg ), San Salvador–Cuscatlan Rotary Club from El Salvador, and Companion Community Development (CoCoDA).

The Mayor of the municipality of Suchitoto contributed by fully funding all the electrical installation needed to run the water pump.

In 2006, another community in El Salvador submitted a request to build a water system, the Community Development Association El Zapote, located in Cabañas City. This community was also affected by the civil war and was forced to seek refuge in Honduras during the conflict. In the late 80’s they returned to their community and found out that their homes and working fields were destroyed. They were facing no running water and most of the residents suffered from inadequate access to clean water. Major water distribution systems were eventually constructed to benefit some communities but not El Zapote. These residents were forced to obtain minimal quantities of water from an antiquated, dilapidated system on a nearby hillside. This source was frequently contaminated, contributing to health problems in the region.

In 2007, the Presbyterian Committee on the SDOP awarded a $25,000 grant to this community. These funds helped to start the system and with the support of other organizations the system was completed in 2008. The following organizations made possible the El Zapote community dream to have access to clean running water: Companion Community Development (CoCoDA), REDES, Pachwork Central in Evansville, USA, The Rotary Clubs of Indiana, and The Rotary Club in El Salvador. The Mayor of the Municipality of Victoria in El Salvador provided support to the project by contributing  $15, 000 to purchase pipes and other materials not covered by the Presbyterians and Rotary grants. 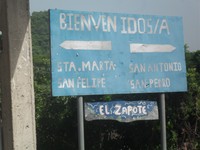 Ten years later both water systems are still working and running well.  Access to water has impacted the life of these community residents. Because of these grass-roots efforts the people now have better living conditions, improved health and nourishment and women are now able to contribute to the support of their community and family.

CoCoDA organization has played a crucial role in the construction of these water systems and other economic development in EL Salvador. They have been able to develop model collaborations between people and institutions. They have been in constant communication with the staff of the Presbyterian Committee on the SDOP keeping us informed about the programs development. Last month they visited El Salvador, Ivan J. M. Villasboa, CoCoDA Acting Director joyfully reported:
“Aguacayo’s water system is still fully operational, they have already installed 2 new pumps and they have always plenty of money to cover any unforeseen expenditures. As we have predicted, the project is perfectly self-sustaining. Last month in El Zapote the community started planting trees near the natural springs to protect their water source.”