A small congregation replaces its manse with a mission

This article originally appeared in the September/October 2016 of Presbyterians Today. 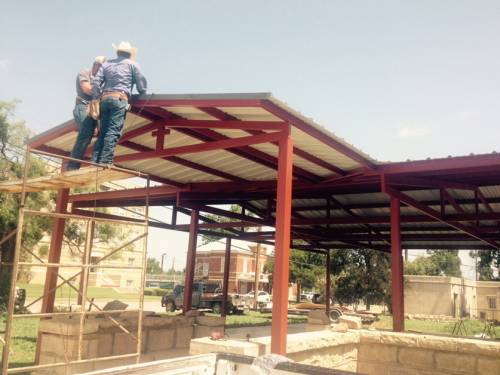 Contractor Archie Akers and his assistant Justin Hollins put the final piece of roofing on the new pavilion. The 40-member congregation raised about $65,000 for the project through donations and grants.

For more than a century, the manse next to First Presbyterian Church in tiny Baird, Texas (population 1,600), served many functions: as the church’s first sanctuary, as a home for a string of pastors, and as space for vacation Bible School and adult Sunday school classes. In recent years, however, it had become an albatross, a dilapidated structure that was too expensive to repair and too expensive to demolish.

“We talked as a church family about needing to do something, but everybody was concerned about demolition because of the asbestos,” says Nicki Harle, church treasurer. And, of course, members worried about letting go of their church’s history.

“It was a very emotional thing because it had been the first church, but it was in terrible disarray,” says Pat Parker, clerk of the session.

Then the 40-member congregation—which hasn’t had a full-time pastor since 2013—began dreaming big, imagining what might happen if it were to replace the aging manse with an open-air pavilion that would serve church and community alike.

Without a blueprint or a budget, church members began thinking and acting creatively. First, they secured a $5,834 grant from the West Texas Council of Governments to cover an environmental assessment. (Baird is a member of the council and was eligible to receive the funding.) Then they received a $23,000 grant from Palo Duro Presbytery to pay for demolition and found a demolition contractor, a colleague of a longtime church member, who was happy to cut them a deal.

“He almost made no money on it because of what we were doing; he gave us a wonderful bid,” says Parker. “He just said it was something he needed to do.”

From there, members began raising money for the design and construction of what would be a 42-foot-square pavilion. They dipped into their own pockets and cashed out a couple of the church’s CDs, but they also found others who were willing to support the cause. An Abilene lumber company helped the organizers identify an artist to create a conceptual drawing they could show to potential contractors. The Synod of the Sun provided a $10,000 community service grant, half of which went toward a new wheelchair-accessible restroom that would also serve the adjacent fellowship hall. And then there was the local beautician who often does work at the funeral home Parker and her husband, Skip, own.

“Every time my husband would give her a check, she’d turn it over and sign it and say, ‘Here, put this in the pavilion fund,’” Parker says. 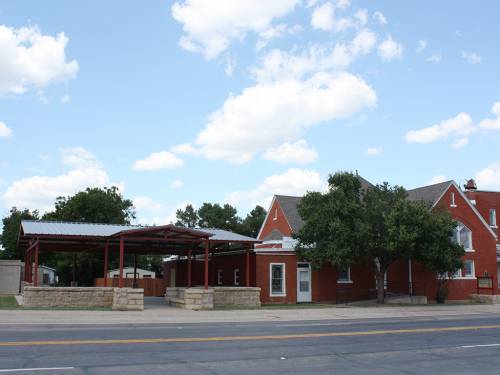 First Presbyterian Church of Baird, Texas, replaced a dilapidated manse with a new open-air pavilion that serves both the church and the community.

All told, the church raised about $65,000 for construction and for the purchase of tables, chairs, and sound and lighting equipment. “We managed to get it done and not go into debt,” Harle says.

The new pavilion preserves the history of the old building. The stone entryway is actually the entryway of the old manse, and other stones from the manse were used as decorative elements. (Unused stones were given to church members as keepsakes.) “That was part of what appealed to a lot of the people that donated to the project,” says Harle. “They liked preserving the history.”

Even before the new pavilion was completed, the Callahan County Historical Commission held a meeting there in the summer of 2015. The site has also been used for other civic meetings, weddings, concerts, a blood drive, and First Presbyterian’s inaugural “truck or treat” program on Halloween as trick-or-treaters walked around the facility and received candy. “It’s been very special,” Parker says. “People are very aware that we’re here.”

Parker thinks the pavilion is part of why First Presbyterian is growing in both community impact and membership. In the past few years, it has celebrated three adult baptisms—an impressive number for such a small church—and is beginning to see more young families in worship.

With creative thinking, sacrificial giving, and the support of friends, neighbors, and its presbytery and synod, First Presbyterian Church has turned the albatross next door into a phoenix rising from the ashes.

Mark Ray is a freelance writer based in Louisville. A frequent contributor to Presbyterians Today, he has written curriculum for the Presbyterian and United Methodist churches. He also writes extensively for the Boy Scouts of America.