Groups share similar mission with the PC(USA), even though far apart 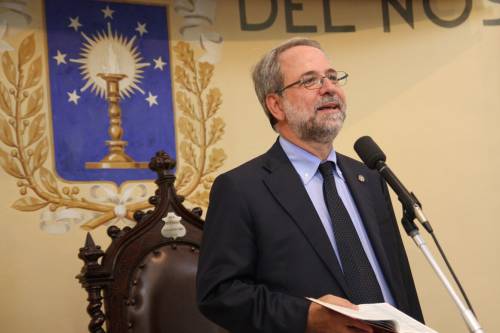 The vice-president of the Synod, Samuele Carrari, remarked to the voting members and guests that it is “exciting and gives us great joy that we have such similarities and similar mission with the Presbyterian Church (U.S.A.), even though we are so far away from each other.”

The Italian Waldensian Church and the PC(USA) each share growth in racial ethnic and new immigrant ministries.

It is not surprising that Waldensians care deeply about immigration and have welcomed refugees from countries in North Africa, Sub-Saharan Africa, and the Middle East, as Waldensians themselves were persecuted and exiled from their lands. Historically, they suffered religious discrimination, were incarcerated, forced off their land and killed. Even so, they pledged to be faithful witnesses of Jesus Christ. 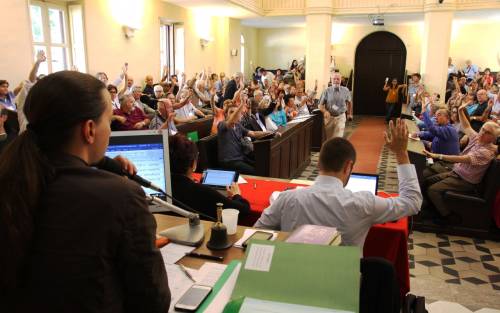 Voting at the 2016 Synod gathering of the Waldensian Church in Italy. (Photo provided)

So, it is a natural progression that the Waldensian and Methodist Churches engage in ministry with immigrants coming into Italy, as they themselves were historically discriminated against. “We know what it is like to be a minority. We have something to say about this in the ecumenical dialogue,” a young Waldensian pastor said during the Synod’s discussion of ecumenical and inter-religious dialogue.

From the beginning, the Waldensians have had women preachers. The Synod meeting was facilitated by a woman Synod President Daniele Jiovenal. The Tavola Valdese also has a Moderator Pastor Eugenio Bernardini, who’s role is similar to the PC(USA) Stated Clerk.

Six years ago, the church voted to permit the blessing of same sex couples.

Since 1979, the Waldensian and Methodist Churches in Italy have been united by an “integration pact.” They remain legally separate, each maintaining their own buildings paying their own ministers, however, they share pastors and resources in mission. Also, in all of the councils of the union, the two Churches are united with the “Tovola” (literally, the table), or the Executive Board, acting for both churches.

Waldensians are often called “Pre-Reformation Christians” as the church has its origins in the 12th Century, when Waldo, a rich merchant from Lyons, decided to live like an apostle, gave all of his possessions away, began to preach, and translated the Bible into the everyday language of the people.

Though the Italian Waldensian and Methodist churches in total are small – there are around 30,000 Italian members – their 180 voting members, 32 ecumenical guests, and others at the Synod meeting heard rich discussions, including committee reports about their work with migrants, engaging in more ecumenical and inter-religious dialogue, revising aspects of the structure of their church meetings, and plans for the 500th Anniversary of the Reformation in 2017. The Waldensian and Methodist Churches are members of the World Council of Churches (WCC).