The assurance from Monday’s sermon: ‘There is water flowing in the wilderness’ 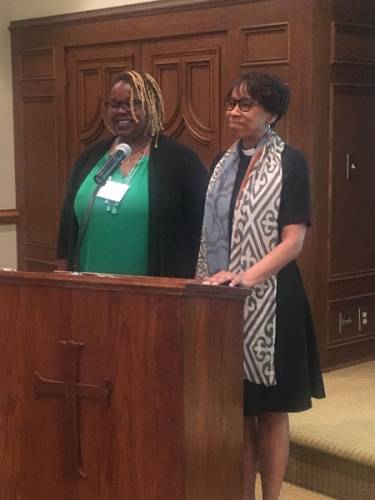 The Revs. Aisha Brooks-Lytle, executive presbyter of Presbytery of Greater Atlanta, at left, and Amantha Barbee share a moment at the end of opening worship Monday during the East Coast Vital Congregations gathering. (Photo by Paul Seebeck)

ATLANTA — During opening worship at the East Coast Vital Congregations gathering at Atlanta’s First Presbyterian Church, the Rev. Amantha Barbee told nearly 100 mid council and other church leaders that if they want a vital congregation, they should “tell the truth, listen, take risks and above all preach the gospel.”

Even though Barbee loves traditional old school church, the poetry of old hymns, a good deep theological sermon and a good high church anthem (she has a classical music degree), none of that brought her the wisdom that came from what she called her deepest spiritual experience.

Using Isaiah 43:18-21 as her text, where God says through the prophet, “Do not remember the former things” because God is “about to do a new thing,” Barbee said that the new thing for her occurred in 2016 in the streets of Charlotte, N.C.

It came during a nightly protest after a 43-year-old black man, Keith Lamont Scott, was fatally shot by a black police officer. During the protest, a young woman got in Barbee’s face, she said, telling Barbee in no uncertain terms that just because she was wearing a clerical collar and had perfect hair, all the education in the world didn’t give Barbee the right to come down to her community and think that she knew everything.

The girl told Barbee if her Jesus were real, he wouldn’t let Keith get shot. Nor would he allow other black individuals around the country to be gunned down just for being black.

She said, according to Barbee, “You don’t know nothing about what it’s like down here. You and your Jesus are just fake hope for some BS that the white man has brainwashed you to think.”

That night, Barbee had in her words “a spiritual experience.” That night she had church and saw God’s image in a whole new light.

“And it was real, very real,” she said. “I listened and I learned.”

Barbee showed the girl what she could do with her highly educated gift of gab when she spoke with police officers.  The girl showed Barbee how not to be killed. They walked out of the protest “alive, angry, connected and arm-in-arm.”

“That young woman was God’s unexpected gift to me,” Barbee said.

A couple of weeks ago, the young woman and her husband drove from Charlotte to Decatur, Ga., for Barbee’s installation service at Oakhurst Presbyterian Church, where on Feb. 25 she became the church’s new pastor. They also went to see her mother in the hospital. The young woman, Barbee said, wanted to make sure Barbee knew that her mom was OK.

“There is water flowing in understanding how an African American hears a text versus an Asian versus a Native American versus a Euro American.”

“There is water flowing in our ability to bask in the great diversity in which God created us.” 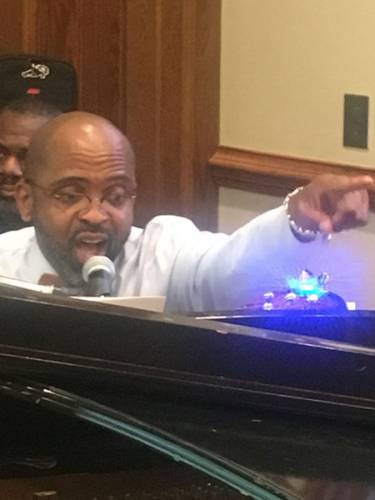 The 14 presbyteries chosen to participate in the first wave of the 2020 Vital Congregations launch will pray, plan and worship together this week and go deeper into both the theory and theology of the VC initiative as they begin to plan the two-revitalization process for their presbyteries and churches.

In the first year of the initiative, churches enter into a period of assessment studying together seven marks of vital congregations (click here to read about each mark) and discerning what new thing God might be calling them to do. The second year is about joining God in the new thing taking place and faithfully living into the change.

Trinity Presbytery General Presbyter Danny Murphy, whose presbytery was part of the Vital Congregations pilot program along with the presbyteries of Newark and San Jose, spoke to the gathering about what he and churches have learned now that they’re in the second year of revitalization efforts.

“Face fear with faith,” he said. “On the other side of fear is new direction that God has for us as we seek to know and serve Jesus more faithfully.”