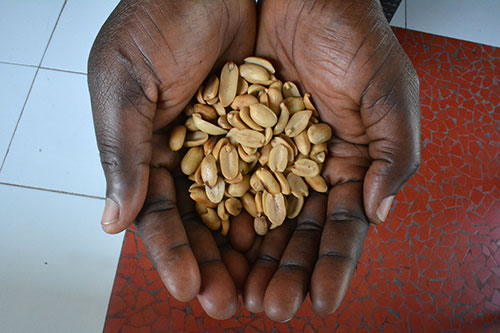 It seems like a no-brainer: the U.S. department of Agriculture’s plan to donate 500 metric tons of surplus dry roasted peanuts to feed 140,000 malnourished children in Haiti. But if you look just a little deeper, Presbyterian World Mission and dozens of other concerned organizations, say it is actually a recipe for disaster.

“It does indeed solve the problem of the U.S. Department of Agriculture not having to pay for storing an excess of peanuts, but the plan is not a solution to the hunger issues in Haiti,” said Cindy Corell, mission co-worker in Haiti. “The harm done to Haitian peanut producers is irreversible. Anyone who needs proof of that need only look back to the rice dumping that began in the 1980s. Since ‘Miami’ rice entered the food markets in Haiti, the higher-quality local rice production suffered greatly.”

Haiti has suffered a three-year drought, with the last year’s low rains caused by El Niño conditions. Some farmers are looking at losing their fourth consecutive crop. More than half of the country’s population works in the agricultural industry. Already the poorest country in the Western Hemisphere, about 75 percent of the country lives on less than $2 a day.

“Conditions in Haiti right now create circumstances for deep hunger and severe malnutrition,” said Corell. “But dumping surplus crops from U.S. farmers helps the U.S. as much or more than it helps the poor in Haiti. The U.S. farmers, whose produce is subsidized by U.S. taxpayers, are paid for their work. The Haitian farmers face even more hardship when they cannot sell what crops they have, and Haitian school children are eating foreign foods. If the U.S.D.A. wants to help solve the hunger problem in Haiti, send funds to support Haitian farmers as they cope with horrendous circumstances.”

Former president Bill Clinton, who was very much in favor of the rice dumping in the 1980s, has apologized for the decision and has referred to it as “devil’s bargain.”

“It may have been good for some of my farmers in Arkansas, but it has not worked,” Clinton told the Senate Foreign Relations Committee in 2010. “I have to live every day with the consequence of the lost capacity to produce a rice crop in Haiti to feed those people, because of what I did.”

The importing of foreign food into Haiti is a root cause of poverty, said Corell. The Joining Hands network in Haiti, a joint initiative of World Mission and the Presbyterian Hunger Program, identifies it as the focus of its advocacy campaign for 2016.

“Agriculture is foundational to the development of any national economy,” said Ruth Farrell, coordinator of the Presbyterian Hunger Program. “The global food price crisis of 2008 highlighted the precarious position countries are in when they depend on imported food. Haitians remember the food price riots and know that they want to produce their own food as much as possible. Dumping disrupts the economic stability of farmers and the country’s need to develop its agricultural sector. Supporting the development of the agricultural sector so that Haitian farmers can feed their country, and have a viable livelihood, would be foundational to economic development in Haiti.”

The FONDAMA (Fondasyon Men-lan-men Ayiti) network’s mission is to “restore the Haitian environment toward food sovereignty and sustainability.” FONDAMA wants to secure food sovereignty through the promotion of family and cooperative agriculture that is organic and respectful of the environment so that the rights of future generations are protected. FONDAMA works with over 20,000 farmers throughout Haiti.

Presbyterian World Mission and the Presbyterian Hunger Program ask for prayers for the people of Haiti and for the wisdom of the U.S. government to make decisions that are in the best interest of both countries.