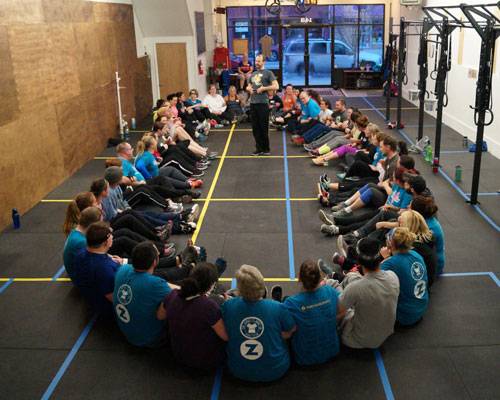 Arm in arm, this class finished with circle sit-ups: all the athletes pulling each other up so that no one is left behind. –Lauren Grogan

Michael Plank has put the cross into CrossFit. The bi-vocational and decidedly entrepreneurial pastor of Underwood Park CrossFit, a new worshiping community in Albany Presbytery, pursued his call to ministry at McCormick Theological Seminary while at the same time discovering a newfound passion for physical fitness.

“There was a woman from the Lutheran seminary [in Chicago] who had a grant to do personal training with any seminarian as a part of what she called her ‘wellness ministry’,” Plank explains. “She was convinced that clergy people needed to know how to take care of their bodies, and a lot of them didn’t.”

Plank’s experience of physical fitness during seminary was so compelling that not only did he become a certified personal trainer, but he also started a similar wellness ministry at First Presbyterian Church of Hudson Falls, N.Y., where he was called as pastor in 2010.

Later, in the course of his own ongoing exercise journey, he discovered CrossFit, a unique, worldwide fitness phenomenon, about which he made several observations that were both timely and relevant to the nature of the 21st century church.

“CrossFit does a tremendous job of building community,” says Plank. “In CrossFit gyms around the world, you will see people not only excited about gathering together at the gym, but also developing close friendships outside of the gym, bringing meals to each other when someone is sick or grieving, going to each other’s graduations and weddings. Because this is all the kind of stuff I have heard that churches can be and that churches used to be, I started asking myself the question, ‘What is it that separates a community like that from a community of faith?’”

So, after four days of intense conversation with friends, presbytery colleagues, and the executive in the Synod of the Northeast—who advised Plank that grant money was available to start a new worshiping community—Plank was ready to answer what he identified as “a pretty heavy call.”

But first he and his wife, Lauren Grogan—his partner in life, business and ministry—had to navigate a series of personal, vocational and logistical challenges.

In June 2013, Plank and Grogan lost a child to stillbirth.

Then First Church, after discussing whether it would feasible or wise to reduce Plank’s hours from full time to half time in order for him to start a CrossFit ministry, voted—while not unanimously but “by a really wide margin”—to approve his new terms of call.

At last, in October 2014—three months after welcoming their second child, a son, into the world—Plank and Grogan started their new venture, a worshiping community that combines spiritual practices with rigorous, physical workouts. 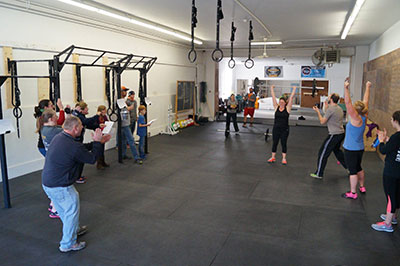 The first person to finish a workout is celebrated, but the cheering is always loudest for the last person to complete it. —Lauren Grogan

Underwood Park CrossFit, which offers classes six days a week, Monday through Saturday, is unique among CrossFit gyms in that it holds worship as an optional activity every Friday at 6:30 p.m. Plank describes the roughly hour-long weekly service as “blending elements of traditional CrossFit classes with elements of Reformed worship.”

Plank chose to structure the gym’s worship service around the Benedictine Prayer of Examen, which starts with a “desolation” piece.

“Since everybody comes in with baggage,” says Plank, “we first touch base on where things have been difficult during the week.”

The service then alternates times of prayer and proclamation with physical movement, even a high intensity workout. Worship then concludes with a “consolation” prayer, celebrating where things have been joyful, followed by a communal benediction.

Plank says that this unconventional model—in which a 40-hour work week and an actual vacation remain “a fantasy”—is the kind of ministry “that none of us were taught in seminary.”

What most excites him is that the CrossFit ministry is now fully sustainable, even after exhausting its first couple of years of grant money. “Now it’s really vibrant,” he says. “We’re moving toward a place where we will see some significant growth.”

Throughout the intense preparation and start-up process, Plank has valued the support of the 1001 New Worshiping Communities movement. “What it means is that we have a number of folks we can connect with,” he says. “Being able to share experiences is critical.”

As the CrossFit ministry grows, Plank and Grogan are now training a team to come in and help, for which they are grateful.

“It took a lot of work to get this off the ground,” says Plank. “It has to be your calling; it has to be your passion. If this wasn’t something we believed in so fiercely, we would have shut our doors.”

As he looks back on the last sweaty, exhausting—yet fulfilling—20 months, Plank is honest.

“It’s going to be more work than you think,” he says, “but you just don’t know until you know.”

Still he is eternally hopeful. “I have grown up in the Presbyterian Church and loved it my whole life,” he says. “As the church seeks to define its identity in the midst of a sometimes unfamiliar landscape, I am tremendously excited by the New Worshiping Communities initiative, and I earnestly believe that the ensuing shifts in perspective are paving the way for innovation that allows us to continue to do God’s work in the midst of an ever-changing culture, in a context that is radically different than it was even a generation ago.”

Friday, May 13, marks the PC(USA)’s special emphasis on 1001 New Worshiping Communities. Visit the website to learn how to participate in this movement.