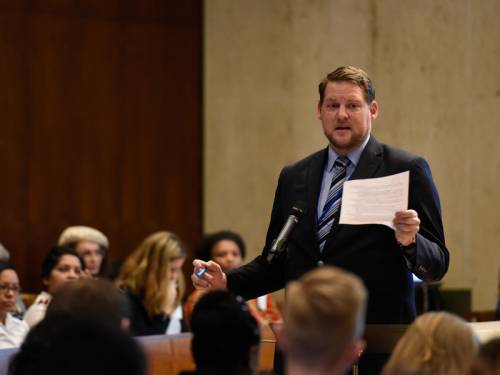 Ryan Smith is leaving his position as director of the Presbyterian Ministry at the United Nations and Representative to the UN for a job with the World Council of Churches. (Photo by Rich Copley)

LEXINGTON, Kentucky — This is a time of year the staff at the Presbyterian Ministry at the United Nations usually gears up for the annual UN General Assembly, which brings a bevy of world leaders to the UN’s New York headquarters for headline-making speeches and sets the stage for potentially  world-changing meetings.

“So much of the work we do here at the UN involves physical meetings and face-to-face diplomacy,” said Sue Rheem, mission specialist for international advocacy at the Presbyterian Ministry at the United Nations (PMUN). “Those who’ve gone into the buildings say it is just so eerie not to see lots of people hurrying off to meetings.  The area surrounding the UN used to be tied up in traffic for couple of weeks during General Assembly, but that’s not the case this year.

“So, COVID has really changed the dynamics of GA, in what was to be its 75th anniversary.  The fact that we’re not able to have a full-fledged celebration has diminished it.”

The UN ministry was one of the first Presbyterian groups to get a sense of how the COVID-19 pandemic was going to upend the world when the UN canceled the annual Commission on the Status of Women in March, just days before tens of thousands of people, including a few dozen Presbyterian representatives, were set to come to New York. Now, the UN’s main event is proceeding as a virtual gathering, which PMUN staff say is a mixed bag.

With events streaming on WebTV, there is more chance for people to access the speeches and events, Rheem says. And overall, there has been more opportunity to interact with member states and other organizations on platforms like Zoom.

But the impact seems muted.

“This year, you’re seeing a lot less New York Times, ‘here’s what so-and-so said at the UN,’” said Ryan Smith, director of the Presbyterian Ministry at the United Nations and Representative to the UN. “It’s more like, ‘If I make that Zoom, I’ll make that Zoom.’ So, I think the gravitas of what the world leaders say is felt differently digitally than it has been when they’ve been in the room.”

Rheem and Smith say the pandemic is highlighting the importance of multilateral entities such as the UN, a point UN General Secretary António Guterres made in his opening remarks.

“COVID has shown us that we are all interconnected, that parallels the issue of climate change — we are one family and it affects us all,” Rheem said. “It’s not just one country or one group that’s affected. It affects all of us and as members of one body we need to work together to solve this problem together.”

Global cooperation to combat the COVID-19 pandemic was lauded by the Rev. Dr. J. Herbert Nelson II, Stated Clerk of the General Assembly of the Presbyterian Church (U.S.A.), in a letter to General Assembly President Volkan Bozkir and copied to United States Ambassador to the UN Kelly Craft.

“On behalf of the General Assembly of the Presbyterian Church (U.S.A.), I am writing in appreciation of the 169 nations that have agreed to do what is possible, working cooperatively, to address and reduce the impact of this plague that has affected all nations and has brought death to millions of God’s children,” Nelson wrote.

There were two no votes on the non-binding resolution calling for “intensified international cooperation and solidarity to combat, mitigate, and overcome the (COVID-19) pandemic and its consequences.” The United States and Israel cast the no votes.

“We are appalled to know that one of the two nations refusing to join this effort is the United States,” Nelson continued. “We do not know if there was collaboration between the U.S. and Israel in refusing to support this resolution. We do know that Israel’s isolationist posture toward the rest of the world on so many issues should not be a factor in the posture of our own government where life and death concerns of millions are at stake.”

Adding to the uniqueness of this General Assembly for the PMUN is the impending departure of Smith for a position with the World Council of Churches (WCC).

“I will look back at this time with real gratitude for the opportunity to be part of the Presbyterian Church and the Reformed family in our work and our advocacy.

Smith will in fact work in the same building the PMUN is housed in, the Church Center at the United Nations, and with the PC(USA), which is part of the WCC. Still, it is a transition.

“I’ve watched the world change from my Presbyterian seat,” Smith said. “That’s a pretty phenomenal experience that not a lot of folks get. I will be forever grateful for that.”

Give to the Peace & Global Witness Offering to continue the valuable ministry of the Presbyterian Ministry at the United Nations.