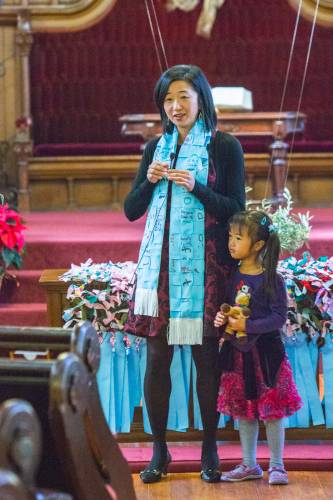 LOUISVILLE – You might say the transformation began with the pews.

St. John’s Presbyterian Church in San Francisco wanted to grow. So it hired the Rev. Theresa Cho as an associate pastor with the idea that her presence would help attract young Chinese families who were settling in the neighborhood. After three years, however, growth hadn’t happened in the way some people expected.

“My thought at the time was, I have no idea what is going to draw people to this congregation—but I do know that there are some things we need to think of changing for those visitors who are already coming through the door,” Cho says.

As a new mother, Cho had noticed that the families starting to visit St. John’s had no easy place to park their strollers. Solution? Remove some of the church’s 100-year-old redwood pews to create a stroller parking lot.

The toddlers who came in those strollers soon wanted access to the snacks and sippy cups inside the strollers, and that led St. John’s to change its policy of no food or drink in the sanctuary.

Eventually, the church got rid of all the old pews and bought stackable ones instead. Today, that allows St. John’s to quickly convert the sanctuary into a Saturday grocery store, and to create a spot on the floor for children during worship.

More importantly, Cho says, all of these physical alterations led to an attitude change, especially among older members who had started out believing that children should be seen and not heard in worship.

“As much as we focus on changing worship or church,” says Cho, who is now co-pastor of the congregation, “we’re really talking about changing people. It’s creating a spiritual discipline in people on their attitude toward change.”

Most Presbyterian churches grapple with these kinds of issues when they change pastors, but church leaders say that in fact, congregations are in a constant state of transition.

Statistics compiled by the Presbyterian Church (U.S.A.) bear that out.

Active membership in the denomination fell by more than 275,000 from 2012 to 2015, a drop of nearly 15 percent. For much of the 20th century, it was common to see pastors stay at churches for 20 years or more. Today, the average tenure of Protestant pastors in the United States is five years, according to church growth expert Bill Easum.

Cho’s family symbolizes that shift as well. Her husband, the Rev. InHo Kim, works one-third time with a Taiwanese congregation, one-third time as a presbytery consultant to churches in transition, and one-third time for New Beginnings, a church transformation initiative.

Sanctuary in a changing world

Outside church walls, the pace of change is even more dizzying.

“We’re living in a world with the most rapid discontinuous change we’ve ever known,” says Vera White, national coordinator for the PC(USA)’s 1001 New Worshiping Communities initiative, which has helped established over 350 new congregations around the nation. “The anxiety level as a result is very high in our culture.”

“The church has been seen as the antidote to all this change, where people can go and feel protected and feel good about themselves and the world,” White says. “So part of the clinging to the past” that often prevails in congregations “is a reaction to this rapid change in the world around us.”

White says the kinds of new worshiping communities she oversees are better positioned to deal with change, because they haven’t established this 300-year-old tradition of “This is the way we’ve always done things”

Now this is church

The Rev. Jeri Dahlke, a California pastor who recently finished a two-year stint as co-leader of The Art of Transitional Ministry week-long program at the Zephyr Point site, says a congregation’s energy is a key factor in how well it can adapt to change.

“If there is a high degree of apathy—the idea that we need someone else to come in and take care of our problems—that’s really tough,” Dahlke says. “But in other cases, even if a church has conflict going on or it is not facing up to the demographics of its community, if they have energy,” there is a chance they’ll be able to adapt to the future.

In the training events she has helped lead at the Zephyr Point Presbyterian Conference Center in Nevada, Dahlke says, she has found more and more pastors and elders who want to learn about transitional ministry, even if they don’t want to specialize in it.

A key technique her group uses to lead congregations through change is “appreciative inquiry,” a method first developed for businesses at Case Western Reserve University in the 1980s. In one approach, Dahlke says, congregation members are paired with each other and asked to answer a question: “What’s a moment when you thought, ‘Now, this is church’?” The pairs then tell each other’s stories to the larger group, as a way of hearing and empathizing with the other person.

The technique is one way to get church members to focus on their blessings and opportunities, rather than on their fears and losses.

Still, it is natural for human beings to be anxious about change.

That is one reason that churches often wait until they are late in their life cycles before they are ready to deal with any kind of fundamental transformation, Grier says.

“There is a great saying that change only happens when the pain of staying the same exceeds the pain of changing.”

On the other hand, the resistance to change isn’t just a matter of congregants’ ages, Grier says. He works with many congregations as part of Project Regeneration, a foundation initiative to help churches analyze their financial health and plan for the future.

“In situations like merging with another congregation, I have found the older members are often the most pragmatic. I think that’s because, in many cases, the people who have remained at a church are the ones who still sense that there is opportunity. I’ve heard them say over and over, ‘We just don’t think God is done with us yet.’”

Changing to serve a new generation

When church members do decide to reconnect with their communities, though, they often face a sharply different world. No longer is there a ready pool of young people who were raised in the church. The Pew Research Center has shown that among millennials—those who are roughly age 20 to 35 today—about 35 percent say they are not affiliated with any religion, and only 11 percent identify themselves as mainline Protestants.

The Rev. Dr. Perryn Rice, senior pastor at Lake Highlands Presbyterian Church in Dallas, delivered the farewell sermon at this year’s Presbyterian Youth Triennium, and says he has found remarkable differences between young Presbyterians and those of older generations.

“For people in my generation, when we think of divisions in the church, our minds go to race or sexual orientation,” he says. “For our younger generations, those lines are blurred or they have been erased.”

For millennials, the big issues are inequality, both economic and social, and mission projects that will help narrow those gaps, Rice says. “It is a challenge to present a gospel message to this group. What I do is to speak about equality and inclusion. That resonates deeply with young people, that America should be for everyone and not just the 1 percent.”

“When I look at our young people, it does provide me with hope” for the future of the church, Rice says, but he notes that older church members will need to be more open to change, because younger Christians “see the world differently and they see the church functioning differently.”

Examples include the “neo-monastic” movement, in which groups of Christians share households together, and neighborhood-based “mini-churches” that often focus on a particular mission activity, says Scott Hagley, assistant professor of missiology at Pittsburgh Theological Seminary.

These forms of church often center on groups of Christians following certain daily and weekly practices, such as prayer, Bible reading, mission work, and sabbath rest.

Hagley, who once pastored a church with a similar focus in Vancouver, Canada, believes that the traditional church—“a civic institution that you belong to and attend on Sunday”—is “not adequate to the task of forming a Christian identity in this age.”

For many younger people who have spiritual yearnings, Hagley says, traditional churches are no longer where they seek their answers. “The front doors of ‘church’ have now become someone’s living room or the coffee shop or the pub. So how can we as a church help form and send people in such a way that when they’re at the pub and coffee shop and welcoming people to their homes, they are witnesses to the gospel of Jesus Christ?”

Still, he is not worried about the future of the church.

“I think we’ve equated numbers with influence and success, that bigger must always be better. But I have a strong conviction that God is good to the promise he made to redeem and reconcile creation, and if that story of redemption involves a struggling minority church in North America for some period of time, so be it.”

“I have no idea what the church will look like in 100 years, but I see God at work in the church and outside of the church, and I think because as Presbyterians we emphasize the sovereignty of God, it makes it possible for us to look at things very broadly,” she says.

“To me, members are not an issue, and buildings are not an issue. My concern is creating disciples who are sharing the good news with others, and I have no doubt that God’s work is going to continue and my job is to be as much a part of that as I can be.”

Mark Roth is a retired newspaper journalist in Pittsburgh and a Presbyterian elder serving on Pittsburgh Presbytery’s Commission on Ministry.