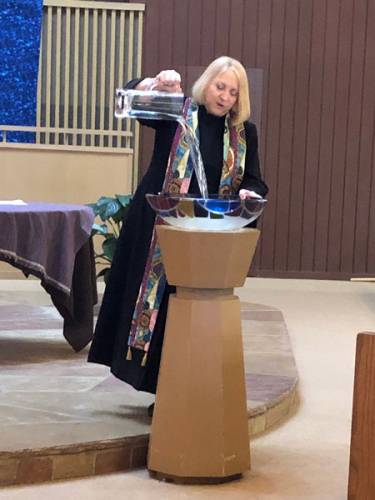 The Rev. Dr. Margaret Boles has seen the PC(USA)’s Vital Congregations Initiative help pastors and churches in San Jose Presbytery pay attention to what God is already doing in their churches and neighborhoods. (Photo courtesy of Covenant Presbyterian Church in Palo Alto, California)

LOUISVILLE — As 14 Presbyteries prepare to launch the Presbyterian Church (U.S.A)’s Vital Congregations initiative in January, three presbyteries — Trinity, Newark and San Jose — are finishing up a pilot program of the two-year revitalization process.

In the Presbytery of San Jose, the 10 congregations in the VC pilot have about six months left in the revitalization process.  For the presbytery’s VC coordinator, the Rev. Dr. Margaret Boles, it’s been a delight seeing 15 pastors representing 13 churches meeting in monthly cohort groups.

“It feels like gold, because relationships are being strengthened and ideas are being shared,” she said. “It has created such good energy in both the presbytery and its churches.”

According to Trinity VC coordinator Dr. Phyllis Sanders, the pastors who have already been through the pilot program will continue to meet quarterly in their cohort groups to discuss ways that they’re continuing to live out the seven marks of congregational vitality.

“Otherwise it becomes a one-shot deal, like a project, rather than a continuing process of transformation, ” said Trinity’s general presbyter, the Rev. Danny C. Murphy.

For Boles, pastor of Covenant Presbyterian Church in Palo Alto, California, the richness of the VC process is what makes it so meaningful to participating churches. After the first year, the initiative encourages churches to celebrate their history — which Covenant did, taking files from 70 years of life together and laying them out in a missional timeline.

“It was so much fun and so positive for the congregation,” she said. “We left it up for a month.”

For other churches in the presbytery Boles heard from, both celebrating their history and also being encouraged to do a prayer walk in their neighborhood helped create a new sense of purpose and meaning.

One of the final steps during the second year of the initiative is taking the U.S. Congregational Life Survey to help each congregation assess how they’re doing in each of the seven marks.

Trinity’s Sanders has seen how helpful this is in helping churches continue to explore their strengths while working on areas that need attention.  For example, McGregor Presbyterian Church in Columbia, South Carolina has been working on “intentional, authentic evangelism,”  which was its lowest-scoring mark.

“And now they’re beginning to restructure what they do around all the marks,” Sanders said.

Wanting  to more fully live into the mark of “outward incarnational focus” by getting out of the walls of their church and into the neighborhood, Shiloh First Presbyterian Church in Winnsboro, South Carolina, held a Jazz on the Green event. When it was moved indoors to a local community center because of inclement weather, the church’s pastor, the Rev. Dr. Robert Scotland, had artificial turf placed in the area where the band played.

“It was a great neighborhood and ecumenical gathering, with children from both the church and community participating,” Scotland said.

At Newark Presbytery the  Rev. Dr. Barbara Smith, transitional director of presbytery ministries, says going through the VC pilot initiative was “a win for them.” When the churches started the revitalization process, she admits that the presbytery wasn’t in a good place. But because of the pastor cohort group they are doing much better.

“Which in our context is just as valuable as what has happened in the other pilot presbyteries,” she said.

Some 24 pastors and church leaders in Newark Presbytery participated in the cohort groups. Of the 19 responding to a survey at the end of the process, 14 said they would probably (6) or definitely (8) participate in future cohorts. Of the 10 participating congregations, three-quarters of those responding said they would be somewhat comfortable talking with others about the seven marks.

Now when churches apply for grants, Smith says the presbytery asks them — whether they participated in the VC pilot or not — how their project fits in with the seven marks as a way of helping the churches in the presbytery start talking about the marks.

Boles said the one thing the Vital Congregations revitalization process does is raise awareness of what God is already doing — and for congregations to enter into that.

“It’s raised all of our awareness,” she said. “Members of our presbytery who aren’t in the pastor cohort groups are learning about the things we’re talking about — and you begin to see the ripple effects.” 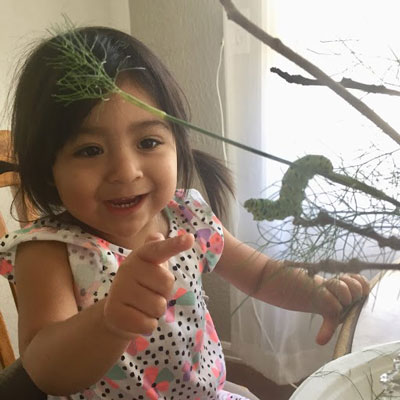 The Rev. Dr. Margaret Boles was so inspired by a presentation on wonder at a Vital Congregations gathering by Columbia Seminary’s Dr. William P. Brown that she invited her congregation to put together an Advent booklet on wonder. The booklet includes a photo of one of the church’s children, Sophia, meeting a caterpillar. (Photo courtesy of Covenant Presbyterian Church)

Presbyterian Mission Agency’s Threadgill is grateful for the faithful work done by the three pilot presbyteries on behalf of the PC(USA) and the initiative.

“I want to acknowledge the significance of their pioneer work for the denomination,” she said.  “By boldly doing their work, through the Spirit’s power, they are bringing about transformation and revitalization within their congregations today.  This is a great celebration to us all.”