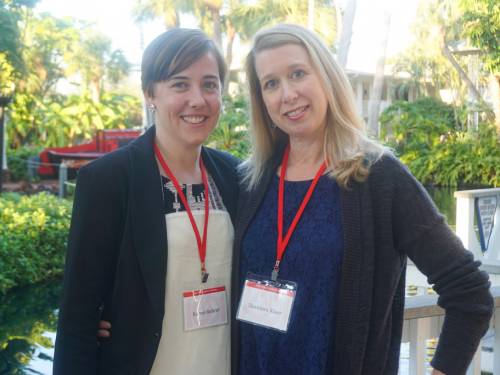 ST. PETE BEACH, Fla. – If the Rev. Karen Rohrer, director of the Church Planting Initiative at Pittsburgh Theological Seminary, subscribes to any sort of watchword — outside of the words of Holy Scripture, that is — it might just be that timeworn phrase that “the only constant in life is change.” Because for Rohrer, it absolutely is.

Just as she was preparing to graduate from Princeton Theological Seminary in 2011 and starting to seek a call — convinced beyond a shadow of a doubt that it would not be a call to youth ministry — the only churches that seemed to want to interview her were the ones who could see her doing exactly that.

So she changed her thinking.

“I need to be open to what God is calling me to do,” she remembers telling herself, “because I have a strong belief that God equips us for whatever God calls us to. I’m pretty sure that I’m not equipped to live in my parents’ basement after graduation, but maybe I am equipped to do youth ministry.”

Now fully open to God’s leading, when Rohrer did at last receive an offer from a church — in youth ministry, naturally — she began to pray about it, and ultimately agreed to an interview. But while meeting with the search committee, whom she found to be “lovely,” she said she felt her throat close.

Understandably discouraged — but again trusting in God — Rohrer decided to make a cold call to the Rev. Bill Golderer, the founder of Broad Street Ministry in Philadelphia, an innovative Christian community that practices radical hospitality and civic engagement, where her seminary classmate — now husband — the Rev. Andy Greenhow, was doing a pastoral residency.

“It was the least professional phone call I’ve ever made,” Rohrer says with a laugh. “I introduced myself to Bill by saying, ‘I’m dating someone who works for you.’ But he agreed to talk with me, and said, ‘I don’t know if you’d be a good candidate, but there will be one slot open this year in our Pastoral Immersion Program to partner with Rebecca Blake to try to figure out what to do with this Presbyterian church in the Kensington neighborhood. Go see if this is a group of people you could imagine yourself loving and caring for.’ So I did. And that was the end of it. I knew this is what I had to do.”

The reluctant youth minister was instead led to be a church planter, co-founding and serving — with Blake — Beacon, a new Presbyterian community birthed out of the former Beacon Presbyterian Church, which was then in the process of closing.

But even at the new Beacon community — which Rohrer and Blake immediately centered in regular worship services starting the first Sunday of Advent in 2011 — the prospect of youth work somehow still loomed large.

“We did a needs assessment and the kids kept coming up,” says Rohrer, “And even though neither Becca nor I felt called to kids particularly, we started after-school programs right away, which ended up being this beautiful gift to us because we were able to approach the kids as ourselves instead of what we thought children’s ministry should look like. And even more than that, I feel like our time with the kids taught us a lot about how to be pastors.”

As a novice church planter, Rohrer learned one of many important lessons. She found that with children, it was easy to come up with community practices and establish community norms.

“When you say to the kids, ‘This is what we do, this is what this place is about, and this is what it means to be a part of the community,’ it gave us a huge lead about how to understand doing the same thing with adults,” she says. “There’s not actually a huge difference between children and adults.”

During the five years Rohrer served at Beacon, the community chartered as a PC(USA) congregation, hosted seven student pastors, two pastoral residents and countless volunteers. She was deeply fulfilled and almost giddy — having trained in adaptive ministry at Broad Street and its partner, Arch Street — at the freedom and flexibility she had in working together with Blake and such a supportive community to build Beacon’s future.

But then she says God came knocking again.

“One day, I was tooling around online, not really looking for anything, because I loved my little church, my life in Philadelphia, and the role I got to play in the community” she says. “But [my husband] Andy and I were just starting to figure out what it means to be a clergy couple, and I was mostly looking online on his behalf when I stumbled on the Church Planting Initiative.”

Rohrer, who with Beacon was “in this incredibly agile and dynamic place,” didn’t at first think she wanted to work in theological education because she found that institutions tend to move very slowly. But once again, she remained open to God’s leading.

“When [Pittsburgh Seminary] called me to do a phone interview, I thought, I’ll just have a conversation because I want to know what they’re doing,” says Rohrer. “As a pastor of a new worshiping community, I needed to advocate for the Beacon. I needed to know these people even if the interview didn’t go anywhere.”

After what she describes as a great initial conversation, Rohrer nonetheless said to herself, “As exciting as this new program is, I can’t do it. That’s not what I’m going to do.”

But, once again, change was in the offing.

Rohrer’s visit to Pittsburgh proved transformational. What she heard representatives of the seminary say — that theological education needs to change significantly and that the school was ready to go out on a limb by putting resources behind that change — was unexpected music to her ears.

“They were in the midst of a total redesign with a new president, a new strategic plan, a bunch of new faculty,” she says. “They told me, ‘Things are changing here, and we want to be agile in response to what’s going on.’ I never heard that from an institution before.”

But beyond that, Rohrer says that the seminary’s new president, the Rev. Dr. David Esterline, profoundly understands the nature of new church development work.

“I explained to him that the new worshiping community that I do is not megachurch stuff — it’s not the kind of thing you tout as a huge success story where masses were baptized,” she says. “It’s the slow work of growing a community of discipleship. He said, ‘That’s exactly what we want. We can’t teach these young theologians that the megachurch model is what it’s going to be like, and frankly that’s not what the church needs, that already exists. We don’t need to plant churches like that — if people want that, it’s available.’ So after he and I had that great conversation, I left and I immediately thought, ‘Oh, no. Jesus is going to make me uproot my life again!”

In late 2016, Rohrer, together with her husband, followed God’s call away from the church, a city, and a home that they loved in order for her to join the team at Pittsburgh Theological Seminary as their director of the Church Planting Initiative.

“Everything came together,” she says. “It was totally clear. And Andy was at a point when he could do it since he’s figuring out what’s next for him in ministry.”

Rohrer says that although the Church Planting Initiative (CPI) has been in place for only a few years, Pittsburgh Seminary has been turning out church planters for about 20 years through a specialized track within its M.Div. program. The CPI was born out of the realization that “God is doing something particular in this place towards church planting, and we should be thinking more intentionally about it.”

In addition to coordinating the Master of Divinity Church Planting Emphasis degree program, the CPI also offers a new Graduate Certificate in Church Planting and Revitalization.

Similar to a DMin in its programmatic structure — primarily remote learning with five in-person, intensive meetings — the CPI confers a graduate certificate at the completion of 18 credit hours during the yearlong program. The cohort’s first face-to-face session is dedicated to the development of spiritual practices.

“We wanted the program to be cohort-based because church planting is really hard work and having people who are walking with you in that is really important,” Rohrer adds. As an experienced church planter herself — now serving as a coach for the Presbyterian Mission Agency’s 1001 New Worshiping Communities movement — Rohrer knows that no one can develop a new worshiping community alone and without support.

“Building a healthy church is hard,” she says. “Empowering leaders with new skills, particularly as they will increasingly be building churches among people who have no experience with church, is a unique opportunity but it’s also very hard.”

To introduce the new graduate certificate program, the seminary is offering special financial aid packages this year. Additionally it will be hosting a Church Planting Day on March 14.

“My hope is that this program will create people who know how to do this work in teams like a cohort that they know they can reach out to,” Rohrer says. “We’re also working on connections with other church planting organizations — 1001, of course, being one — so that we can think through what the best practices are, but also so that we are part of something larger.”

Rohrer also hopes that the church will become more effective in inviting people who are beyond the church into communities of faith, and that “we as a big-picture church will learn how to have those conversations because of the research and development being done in new church starts.”

“The work of church planting requires solid theological education so that we know what we’re doing,” she says, “and while the growing flexibility we have is an incredible gift, our challenge is to always remember what our story is. The key of our story in the midst of the flexibility is to remember the Good News of Jesus Christ, and instead of clinging to our own favorite manifestation of it, to realize how many different manifestations it can have.”