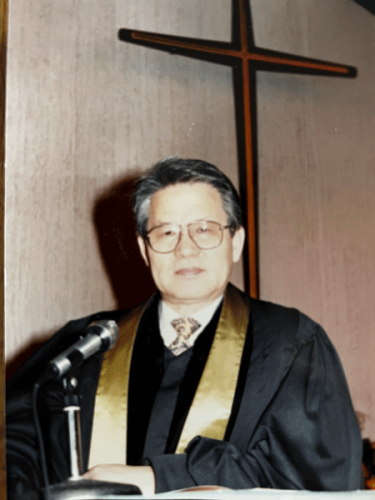 LOUISVILLE — The Rev. Paul G. Moon of Forest Hills, New York, the first Korean American to stand for moderator of the General Assembly of the Presbyterian Church (U.S.A.), died Feb. 20 in hospital hospice due in part to dementia. He was 87.

He was born March 26, 1934, in Daegu, Korea, the oldest of five children. He came to Jesus Christ during his teenage years when a pastor took him under his wing. He loved to sing (hear a recording by clicking here) and throughout his life he sang, directed choirs and organized the Come-N-Sing Messiah concerts at church as well as the Golden Voice choir for seniors after his retirement.

He served churches in North Dakota and Indiana before being called to Bethany Presbyterian Church in Huntington Station, New York, a church he served until 1994. 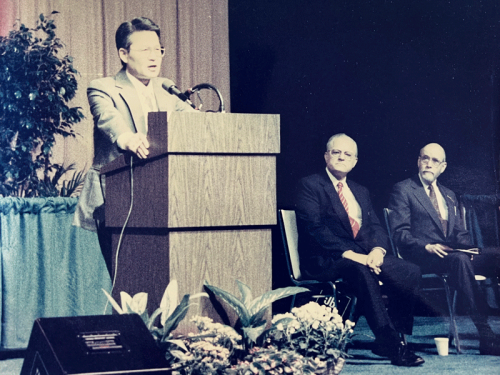 In 1986, Moon became the first Korean American to stand for moderator of the General Assembly of the Presbyterian Church (U.S.A.). Commissioners elected the Rev. Benjamin Weir, who’s seated at right, as moderator that year. (Contributed photo)

In 1986, Moon stood for moderator of the 198th General Assembly of the PC(USA), the first Korean American to do so. According to a New York Times report, commissioners that year elected the Rev. Benjamin Weir, a former mission co-worker in Lebanon who was held hostage there for 16 months, on the first ballot, with 356 votes. Moon finished second with 183 votes. The Rev. Carroll Shuster, pastor of First Presbyterian Church of Coral Gables, Florida, had 105 votes.

Moon became a regional representative for the Board of Pensions, the first Korean American hired to implement the PC(USA)’s pension plan for the growing number of Korean Presbyterian churches. He served there from 1995 until his retirement 10 years later.

He was married to Anna, his dedicated wife, who survives him He is also survived by his two daughters, Paula and Beata (David), grandson Oliver, and many nephews, nieces and cousins, as well as his in-laws.

His siblings are sisters YaeJa Kim of Seoul, South Korea and MyungJa Ro of California and brothers Dr. Jay Moon of Michigan and Matthew Moon of California.

According to his family, he always wanted to help people and to serve God. His favorite Bible verse was Philippians 4:13: “I can do all things through him who strengthens me.”

A private funeral led by the Rev. Jeffrey Courter, interim pastor of First Presbyterian Church of Forest Hills, New York, took place on Feb. 24. A hybrid memorial service is being organized for a later date. For more information on this service, contact Moon’s daughter, Beata Moon, at moon.beata@gmail.com.