Make A Donation Click Here >
Home › The NEXT big thing

NEXT Church national gathering gets going in Cincinnati with energetic, thoughtful worship 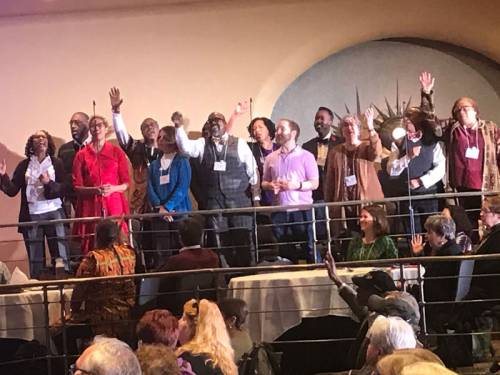 The NEXT Church choir sings Monday during opening worship at the organization’s national gathering in Cincinnati. (Photo by Mike Ferguson)

CINCINNATI — The NEXT Church national gathering roared to life Monday with heartfelt hymns of praise and powerful preaching from the organization’s director, the Rev. Jessica Tate.

The biblical theme for the gathering comes from Joshua 4:1-9, the story of the 12 stones placed in the middle of the Jordan River and late retrieved, stones that serve as a memorial to God’s faithfulness. It’s appropriate, Tate said during a sermon that earned her a pair of standing ovations, to gather in a river city — even along a river, the Ohio, that once demarcated between slave states and free states.

At both the Jordan and the Ohio, she said, “we remember the brokenness that enslaves us, and God’s liberating power to hold back the tide of injustice.”

The dozen stones taken from the Jordan “help us remember God has been faithful before and will be again,” especially when the waters “seem rough and swirling and more than we can manage.”

The Israelites crossed the Jordan into a land that was already inhabited. “This is not a liberation story,” Tate said. “It’s a conquest story.” Joshua reported that the entire nation crossed over the river, which made Tate smile. “If it were up to me, not everyone would get across,” she said. “We are so good at creating fault lines — especially this day before Super Tuesday.”

When our children or our neighbors ask us why we attend church faithfully — behavior she called “out of step with most folks” — how do we respond? Tate isn’t sure — but she does have a story that gets at her own motivation. 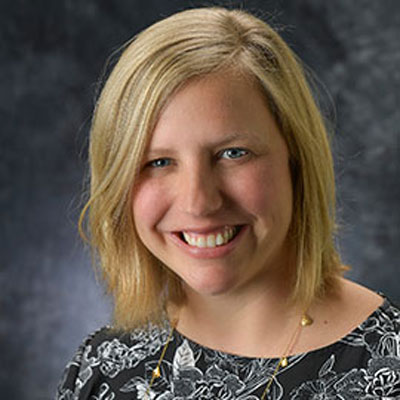 Straight out of college, Tate landed an internship at the PC(USA)’s  Office of Public Witness. “I was pretty sure,” she said, “that Washington was waiting for a 22-year-old like me to bring justice to public policy.”

But what she soon learned was that even Presbyterian members of Congress “don’t care what we think.” This was in 2002, the buildup to the Iraq war. Prayer vigils were being held weekly around the nation and in its capital, but it seemed like war was inevitable. “How could so many people show up and speak out, and political leaders seemed not to care?” Tate said. During an evening vigil she saw hope all around her, but Tate didn’t feel hopeful. “All I could see was how little effect this had bringing about peace,” she said.

She told her mentor, “This isn’t working. Does it even matter?” Her mentor replied, “The church isn’t called to be successful. We are called to be faithful.”

“I remember thinking, that’s BS,” she said, using a more colorful form for bovine fertilizer. “We are supposed to just show up when the world is burning?” She’d been taught “promises of chains broken and sight restored, of loaves and fishes enough to feed everyone. I couldn’t stomach it — so I went to seminary,” she said with a smile. “I’d show them.”

Ever since then, “I’ve been trying to figure out what it means to be faithful and be successful, for the kingdom of God to come to Earth as it is in heaven,” she said. “I’ve seen it,” she added, including the church coming together to secure multi-million dollar investments from companies operating in communities decimated by the mortgage crisis. Such churches “have owned that injustice and have worked toward repair.”

When her two-year-old son cries big and heartfelt tears when she must fly off to events like NEXT Church, it can hit hard, she said. But one day she’ll tell him, “Baby, there are people hurting all over this world. Mommy is working to help make people strong and courageous. Our call is to be faithful — and being faithful means people’s lives are changed.”