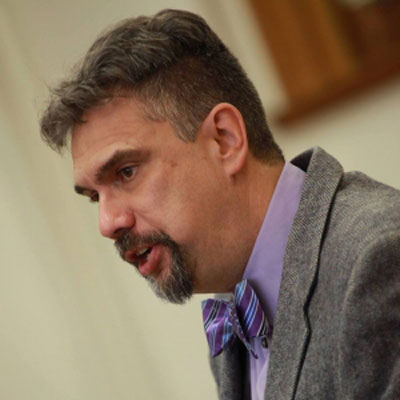 CINCINNATI — The famous quote from the Rev. Dr. Martin Luther King Jr. aside, Dr. Miguel A. De La Torre says the arc of the moral universe “couldn’t care less where it bends.”

“If any bending is to occur,” he said during a keynote address Monday afternoon at the 10th NEXT Church national gathering, “we are the ones who have to do the bending.”

De La Torre, who was born in Cuba just before the 1959 revolution, is professor of Social Ethics and Latinx Studies at the Iliff School of Theology in Denver. His hour-long keynote focused on the concept of hope — and why we must reject it, he said.

De La Torre said his message was designed “for the few faces of color in the audience.” While the rest of the crowd was welcome to listen in, “this is for the marginalized members of society,” he said.

He said embracing “the hope of the dominant culture” means that “I embrace my own oppression, and it makes God vomit.”

He came to the concept of embracing hopelessness in part by taking some of his students to Mexico. One evening a student told him that although she’d seen plenty of misery, she looked into the eyes of one girl and saw hope. That, De La Torre said, was “nothing more than the middle-class privilege that excuses (the student) from doing anything about poverty.”

Working along the U.S.-Mexico border, including seeing children locked in cages, leaves him shaking his head at theologians like Jürgen Moltmann, “who said we will look back and it will all make sense,” De La Torre said. “No matter how I look back, the Holocaust, slavery and gunboat diplomacy will never make sense.”

Then he asked, “Where is God in all of this?”

“If I read the biblical text clearly, sometimes God is simply absent,” as when Jesus cries on the cross, “My God, my God, why have you forsaken me?” If Jesus knows about feeling forsaken, “he might understand how my people feel today on the U.S. border,” De La Torre said.

The hopelessness for which he advocates “rejects quick and easy fixes” because “every solution brings its new levels of oppression.” De La Torre used to work in the business world, “where we made five-year plans. That doesn’t work with spirituality and social justice issues … We’re not going to overcome the oppressive structures” including racism, sexism, xenophobia and homophobia, “which have been with us for a long, long time.”

“I tell my students, ‘Do you fight for justice because you think you are going to win, or do you fight even when you know the battle is already lost?’” he said. Many students want to get themselves arrested during, say, a demonstration, “to get their liberal badges, a rite of passage of how liberal they are … People with hope think they are going to change something. Then nothing changes, and they can’t handle that kind of failure.”

But De La Torre won’t give up his activism.

“It’ll probably get a lot worse,” he said of the work along the border. “I’ve always known I’m not going to change this. I do this because I have no other choice. It defines who I am.”

In a very real way, he said, privilege “means you can walk away. They don’t have to fight this fight. But my people are suffering, and I have to be in solidarity with them.”

He has studied groups like the Young Lords, a turf gang in New York City that got sanitation workers to start making regular pickups in their neighborhood by setting a giant pile of garbage on fire on Third Avenue. Police came and jailed them, De La Torre said, but The New York Times showed up as well. The publicity helped the Young Lords accomplish their objective of regular garbage service, he said.

The  Rev. Denise Anderson, the PC(USA)’s coordinator for racial and intercultural justice, opened up a question-and-answer session following his address. “I think that you have helped generate a kind of holy discomfort,” she said.

What De La Torre is preaching, he said in response to a question, is that creating chaos and disorder “is the only way that oppressed people can find a way to bring about change. It’s what the margins must embrace.”

Many younger white people are also experiencing hopelessness, he said. “There was always a way for white people to get into the right school and get a good job,” he said. But “that’s being stripped away as white people are being held accountable for ‘liberty and justice for all.’”

He called hopelessness “more the desperation of the now rather than the hope of the future. I’m just presenting for a large group of people who see no reason to go to church and are totally hopeless. My message is ‘That’s OK. How can we channel hopelessness into revolutionary action that can bring about change?’ The margins of the margins — that’s who I’m having that conversation with.”

Asked what brings him joy, De La Torre labeled himself a joyful person. “Once I didn’t have to be the one who saves everyone and provides the answer to every oppression that exists, I can sleep with a lot more peace,” he said. “Even if change doesn’t happen, I’m OK with that.”

White Christians must “reject this white Jesus, because it oppresses you. It’s deadly for your community,” he said. Instead, “follow the Jesus of oppressed communities. Join us not to lead us, but to be present until we say what we need. It’s a humbling position, because the dominant culture is used to being the apex of thought.”

“I am asking you to crucify your whiteness so you can be born again and be a new creature in Christ,” he said. In the same way, De La Torre said he seeks to crucify his maleness because it presents him with privilege.

He had one more piece of advice to the white people attending NEXT Church’s national gathering: Don’t weep over all the pain the dominant culture has inflicted.

“My students cry. They leave the room, compose themselves and then come back,” he said. “It’s not about you. It takes the focus off where the focus needs to be.”