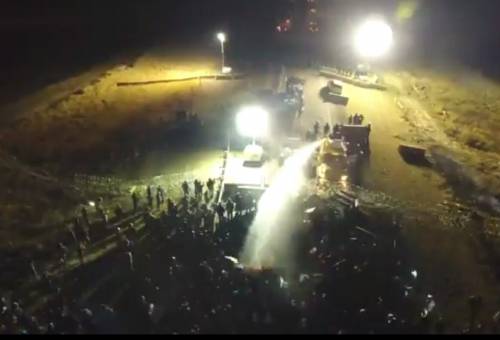 LOUISVILLE – As many as 200 people are reported injured at Standing Rock, North Dakota following an incident with law enforcement at the site of the Dakota Access Pipeline construction overnight. Reports from the site indicate that water protectors staying at the nearby Oceti Sakowin Camp, were attempting to remove military vehicles that were burned in a blockade fire last month. This led to a buildup of law enforcement officers and the use of various tools to disburse the crowd.

Witnesses say law enforcement deployed rubber bullets, tear gas and water cannons on hundreds of people as the temperatures dipped into the low 20s. Graham Biyaal arrived at the camp several weeks ago and was at the front line during the standoff with authorities. He said he was shot by rubber bullets and sprayed with tear gas. After a brief visit to the camp medical tent, he returned to the front lines, capturing video of some of the action.

“So many police were out here, firing rubber bullets and spraying high pressure water on unarmed people,” he said on a Facebook broadcast. “I’m begging each of you to contact your congressional representatives, close your bank accounts. Do not allow [Energy Transfer Partners] to be funded. This is one of the strongest ways to fight the pipeline.”

Biyaal was part of a team that ran 1,100 miles from Arizona to Standing Rock recently. He met with a Presbyterian delegation visiting the camp last week.

The Standing Rock Medic and Healer Council, which set up a medical unit at the front lines, issued a statement on Facebook calling on the Morton County Sheriff’s Office to “immediately stop” the use of confrontational methods against people who are peacefully assembled. “The council calls for the immediate cessation of use of water cannons on people who are outdoors in 28F ambient weather with no means of active rewarming in these conditions. As medical professionals, we are concerned for the real risk of loss of life due to severe hypothermia under these conditions.”

“This was an extreme measure taken by law enforcement. We’ve heard that as many as 12 people were hospitalized in nearby Fort Yates with head injuries,” said Tom Goldtooth, executive director of the Indigenous Environmental Network. “We don’t know the extent of those injuries but we do know a number of people were treated for hypothermia.”

There have been unconfirmed reports that one individual was hit in the face with a rubber bullet and an elder suffered cardiac arrest at the front line. Medical teams are reported to have revived the individual and the gym in Cannon Ball was opened to aid water protectors who were soaked during the night. The Presbyterian News Service has not been able to reach the Morton County Sheriff’s Office about the incident.

“The North Dakota law enforcement are cowards. Those who are hired to protect citizens attacked peaceful water protectors with water cannons in freezing temperatures and targeted their weapons at people’s faces and heads,” said Goldtooth. 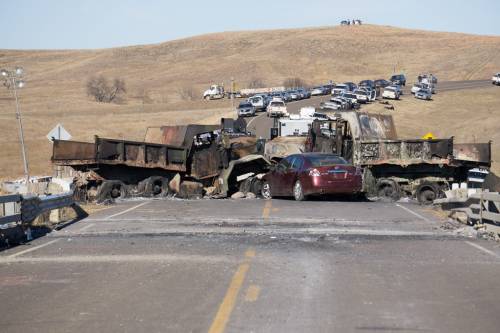 Two burned out trucks and a crashed car block the north end of Backwater Bridge on North Dakota highway 1806. (Photo by Gregg Brekke)

The Rev. John Floberg, supervising priest of the Episcopal churches on the North Dakota side of Standing Rock, condemned last night’s actions.

“That may be appropriate use of force if it’s 60 degrees out, if you’re trying to disburse a group of people in a non-lethal way,” he said. “But we are not 60 degrees. It was 26 degrees and dropping and that becomes lethal force.”

Floberg defended the attempted removal of the blockade on the highway saying it poses a direct threat to the well-being of the people of Cannon Ball and Standing Rock in terms of receiving needed medical care.

“They talk about the first half-hour after a stroke, that there’s a golden half-hour. Well, we’re using up that time going around the blockade,” he said. “We’re using up the time of a person who’s been injured in an automobile accident. To keep this highway blocked for any purpose is morally reprehensible behavior on the part of the state.”

The Rev. Mark Koenig, coordinator for Leadership Development, Racial Justice, and Network Support with the Presbyterian Mission Agency visited Standing Rock last week with Native American leaders in the PC(USA). “Presbyterians have prayed, travelled to Standing Rock, provided supplies, donated to a fund created by the Synod of Lakes and Prairies, written letters and signed petitions, participated in solidarity events, and more,” he said. “We will continue to do so.”

An interfaith group, organized by the Presbyterian Peace Fellowship, the Israel/Palestine Mission Network of the Presbyterian Church – USA, Fossil Free PCUSA, the community of Living Traditions at The Stony Point Center and others, is scheduled to arrive in Standing Rock today.

They will report on their visit via a blog and by Twitter with the hashtag #PPFstSR. Information concerning Standing Rock is also being collated on the Native American Ministries PCUSA Facebook page.

Members of the Standing Rock Sioux Nation and supporters have gathered on the banks of the Cannon Ball River since April, hoping to stop construction of the 1,170-mile pipeline scheduled to move crude oil from the Bakken oil fields in western North Dakota to refinery facilities in Illinois. At dispute are environmental dangers associated with oil spills from the line that is scheduled to be placed under the Missouri River and the desecration of sacred sites.

The Synod of Lakes and Prairies has set up an account to receive donations to help the Standing Rock Sioux tribe’s efforts against the Dakota Access Pipeline. Checks can be sent to: