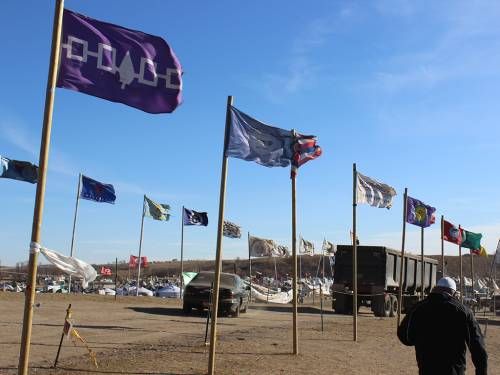 Tribal flags at At Oceti Sakowin Camp show the strength of the winter winds as they begin to move into the area. (Photo by Rick Jones)

LOUISVILLE – While the setting sun cast long shadows over the land, residents of the Sacred Stone Camp gathered near a community campfire as volunteers nearby prepared the evening meal. Children and a handful of dogs welcomed the night as if it were day, running and playing, oblivious to the changing weather and the cause that brought so many to the Missouri River in Cannon Ball, North Dakota.

It has now been seven months since the peaceful action began to protect the water and land against the construction of a crude oil pipeline along the border of the Standing Rock Sioux tribe’s reservation lands. What started out as a small group from the tribe has grown to more than 3,000 in the open country.

Within a few days, winter weather was expected to give those living in the camps a hint of what was in store for the weeks and months to come. A delegation of Native American Presbyterian faith leaders and supporters visited the camps just as the weather was beginning to turn.

It was the first visit to Standing Rock for the Rev. Mark Koenig, coordinator for Leadership Development, Racial Justice, and Network Support with the Presbyterian Mission Agency; the Rev. Irvin Porter, associate in the Office of Native American Intercultural Congregational Support and the Rev. Buddy Monahan, pastor of Westminster Presbyterian Church in Odessa, Texas. Ruling Elder Elona Street-Stewart, synod executive for the Synod of Lakes and Prairies, and the Rev. David Street joined the group.

At Oceti Sakowin Camp (Seven Council Fires Camp) the delegation met residents and workers who were busy preparing for the onslaught of colder weather. Ron Tut Martel, a member of the Standing Rock Sioux tribe, guided the delegation during its visit.

“Winter is coming and we are not prepared,” said Dan Nanamkin, of the Colville Tribe, who has been there a month now. “We need help with carpentry skills. Some of our visitors have brought generators, power tools and other materials to prepare winter fortifications. But they will soon have to leave. We are doing the best we can to prepare. We are trying to insulate our teepees, but we need thick plywood because this wind is brutal out here. Anything like saws, hammers, drills that can be used. We need sheet metal to build wind breaks or hay bales will come in handy. People will soon find out how difficult it will be. I’m determined to stay as long as I can.”

Nanamkin told the group that getting enough rest is the most difficult thing right now.

“We may get three or four hours of sleep at a time. We’re constantly busy all day long with meetings, networking, sharing, communicating the activities and actions that take place each day,” he said. “We are on constant alert. We don’t know when we will be called to action so we are always on high alert.” 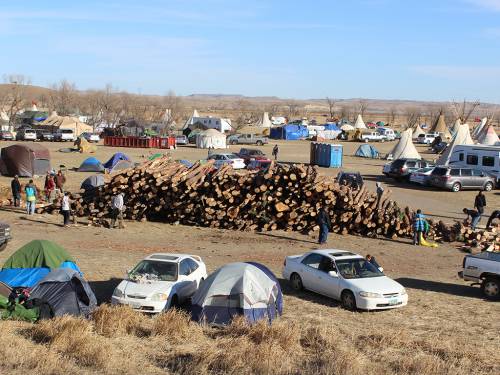 The arrival of freshly cut trees keeps workers busy well into the night to supply residents with wood to keep warm. (Photo by Rick Jones)

On this windy, sunny day of the delegation’s visit, they found the large camp in constant motion. Large and small trucks, RV’s and other vehicles arrived constantly with portable tents, food, wood, dumpsters and more. Loud speakers were set up so a camp announcer could read requests from those looking for electricians or plumbers, or seeking transportation to another town.

Freshly cut trees arrive daily sending a dozen or more workers with chainsaws to a pile, working well into the night to ensure people have enough wood to stay warm. A group of tents resembling a M.A.S.H. unit were located near the center of the large camp as medics and doctors prepared for potential patients in days to come.

“We need everything, wool socks, hats, thermal wear, gloves, heavy parkas, zero-degree sleeping bags,” said “Vanessa”, a medic at the camp. “We’ll take cash donations because we need to buy hay bales, fire wood, solid structures that are movable. Teepee liners and poles are at a premium around here.”

Vanessa said the sooner they get supplies, the better. “The good thing about monetary donations is we can’t always wait a day or a week. A day can mean life or death. We can go to Bismarck and buy it now with cash donations.”

For the delegation, the visit has had an impact.

“It was a very emotional day for me. Even though there was a sense of security at the beginning, no one questioned why we were there,” said Monahan. “Everyone was accepted and everyone was doing something. They were working, fellowshipping, looking for a place to belong and contribute. Why isn’t the world looking at this and seeing how it works?”

“I saw people adapting and Native people are good at that,” said Porter. “Over the years, we’ve been thrown to the wolves and not expected to survive and yet, here we are. We may not have liked it, but we have survived.”

“The camp is a profoundly spiritual place. Prayer, in a variety of forms, supports and sustains the people and their efforts,” said Koenig. “It is also a place where an amazing mixture of traditional ways of living with new technologies and techniques is occurring. We came across a group building ‘tarpees’ a new take on the traditional teepee using innovative ways to insulate and protect from the elements. Small, solar-powered lights would be located on the ground so people wouldn’t stumble over the outside support poles.”

Martel told the team he believes they are making progress in their lengthy stay. “It is a gathering of nations, but its worldly nations. Fifty states and different countries are coming here to Standing Rock to help us fight the black snake. We’ve just got to keep praying. It’s a camp of prayer. We are hoping someone will hear us.”

The Synod of Lakes and Prairies has set up an account to receive donations to help the Standing Rock Sioux tribe’s efforts against the Dakota Access Pipeline. Checks can be sent to: