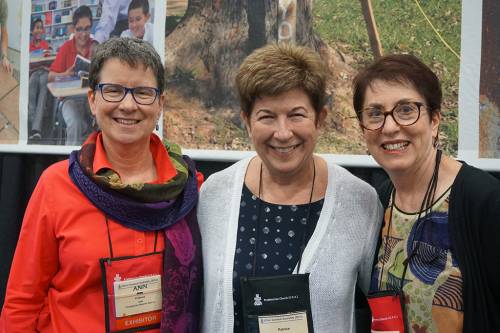 As coach and coordinator for the Presbytery of Tampa Bay, Hatley’s calling—and among her considerable gifts—is identifying, strengthening, and coaching leaders to serve and to grow Christ’s church.

“The Presbytery of Tampa Bay is under way with an implementation of a real redesign of our mission and structure,” Hatley said in an interview at the 222nd General Assembly (2016) in Portland, Oregon, last month. “We are focused entirely on equipping leaders to make new and mature disciples of Christ.”

To initiate this ambitious redesign process, Hatley and Tampa Bay’s leadership started with the goal of creating communities, regional in nature, across the diverse, 70-church, 18,000-member presbytery on Florida’s West Coast.

“Trying to create community when you have a presbytery that large, not just in numbers but geographically, is a challenge, especially since some of our regional areas also have some unique characteristics,” said Hatley. “We have urban, agricultural, and beach communities, which have a lot of people who vacation or spend half the year there as ‘snowbirds.’ What has bound us together is being Presbyterian.”

And that shared identity as Presbyterians has taken them far as they have organized into neighborhoods, yielding more and better relationships among ministry colleagues as well as better networking, information sharing, and support across the presbytery.

At the same time, however, the newly-organized communities have exposed a host of challenges and opportunities, bringing to light both the need to understand how to strengthen and renew churches that are in decline while also recommitting to planting new churches.

“We have not had a great track record in new worshiping community development,” Hatley said. “We start them up and then we don’t really know what to do, or we don’t have a tolerance for what kind of commitment is required. Being in Florida, we have many people who are older and who have a pretty traditional, heritage-oriented way of being church, which is normal. So to them, trying to envision something different has been too hard. Some of them are in churches that at one point were very large—hundreds of people—that have dwindled to well under 100 or even under 50 members. Even as they long for the good old days, they have an infrastructure that they cannot maintain. It’s just too expensive and too large.”

This discovery prompted Hatley into immediate action. “I decided that we needed to do something that brought together all of the elected leadership of the presbytery at the same time in one room to provoke us into thinking differently,” she recalled.

So last April, Hatley enlisted the resources of the Presbyterian Mission Agency (PMA)—specifically Vera White, coordinator of the PMA’s 1001 New Worshiping Communities initiative, and the Rev. Ann Philbrick, associate for the office of Vital Congregations—and invited them to carry out and embody the PMA’s calling to “inspire, equip, and connect the PC(USA)…to serve Christ…through new and existing communities of faith” among Tampa Bay’s elected leaders. Together, White and Philbrick led the presbytery “in a day-long activity of trying to figure out on the one hand how to revitalize and also how to start up something new.”

“From a leadership point of view,” added Hatley, “it seemed to me those were the people that needed to be paying attention, partly to get us started as leaders, and also really to provoke us into learning how to be tolerant, how to be supportive, and maybe even lenient.”

Having White and Philbrick conduct their training event jointly made complete and immediate sense to Hatley.

“It was absolutely appropriate to have Vera and Ann together in the same room because in no way did I want to separate new church development from revitalization,” Hatley said. “What they were able to do was to take the church life cycle curve and have the ability to talk with our churches about their longing for the good old days that we recognize are over, but that what’s required of some of these churches to start something new is often too big and too long term. When we introduced the idea of a parallel situation where a church can be chaplained to closing well, and with great celebration, even as a parallel new worshiping community is starting up, it was a blanket of grace when they learned that they don’t have to be that new thing. It’s a beautiful thing, because in both cases they can thrive.”

Following the day-long consultation, White and Philbrick stayed an additional day to provide targeted consulting in an urban church setting as well as in a beach community, where they led exercises and conducted conversations to help the congregations and the presbytery envision their future stories.

“We don’t know what it’s all going to look like, but we came away with a fire underneath everybody,” Hatley said. “It set the spark that we needed. And just before we finished up, Ann and Vera had the groups break up into their various disciplines so that the trustees were together and the Commission on Ministry was together, and so on. Then the members of the nominating and representation committees spread themselves around to learn more about what was needed in terms of gifts in order to do a better job of nominating leaders. Each group ended up with a beautiful list of actions that are now directing them toward how to better support renewal as well as starting new worshiping communities. I’m looking forward to some big things.”

Hatley said that the joint visit by White and Philbrick was especially timely since the presbytery has at least three churches experiencing parallel movements.

“To have what Ann brings and what Vera brings together at the same time—I think that’s where the grace comes from, because there’s an assurance that a church doesn’t have to be one or the other but that there can be both things happening at the same time,” said Hatley. “We can renew and we can start up something new at the same time in the same place.”