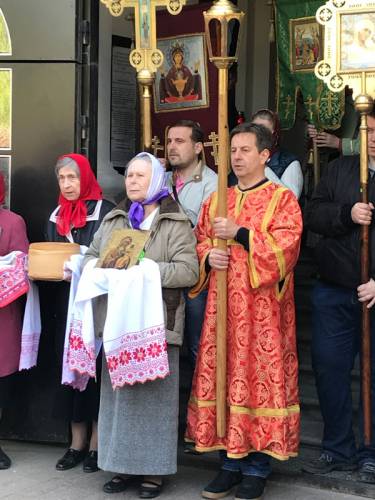 An Easter week procession is shown at the Church of the Resurrection in Moscow, Danilovskiy. (Photo by Carl Horton)

LOUISVILLE — Through world wars, the Cold War and current affairs, people in the United States have heard a lot about Russia — its government in particular.

For the past two weeks, a group of 10 Presbyterians has been in Russia and Ukraine to gain a broader, more intimate perspective on the nations embroiled in a conflict that involves U.S. interests. During the travel-study seminar led by the Presbyterian Peacemaking Program, participants have come to know the nations beyond their governments and the headlines.

“We experienced such generous hospitality all the way along the line,” said Diane Agnew of Grosse Pointe Woods Presbyterian Church in Grosse Pointe, Mich. “Our news media portrays this government (Russia) as out to get us and change our elections, but there are genuinely wonderful people in Russia, Ukraine and here in Belarus. That’s what we need to remember.”

Raafat Zaki from Synod of the Covenant in Ohio said, “For me, it is important to remember that we journey with the church and how — in the midst of the conflicts and the uncertainty, and all sorts of news and information and the lack thereof — we, in solidarity with other churches and other traditions, other denominations, we journey together.”

The participants were speaking from Minsk, the capital of Belarus, on the final day of the 13-day trip that came with an advisory that participants needed to be in reasonably good shape to meet some of the travel demands.

The travelers dove right into the conflict of the region on the second day of the trip by visiting Maidan Square in Kiev, the capital of Ukraine, one of the centers of the Ukrainian Revolution that saw the overthrow of Ukrainian President Viktor Yanukovych, who sought to forge stronger ties with Russia, in favor of a new government that favored working with the European Union.

Tensions between Russia and Ukraine have simmered and occasionally flared up ever since.

“Being in that square, our group was in a place that was significant — it felt like being in Tiananmen Square sort of, where something significant happened for this country,” said Rev. Carl Horton, coordinator of the Presbyterian Peacemaking Program. “That’s where we started to hear the story of the change in Ukraine … and when we moved on to the Russian side, I was struck by how it was a completely different perspective on this conflict.”

Selden Spencer of Collegiate Presbyterian Church in Ames, Iowa says, “The theme we quite often wrestled with is ‘What is the truth? What is going on? Where do you get your information?’ That continues to be a challenge.

“What I personally carry away is there is a lot of suffering, a lot of sorrow, and it almost feels like the misery of Stalin and World War II and reconstruction after that is ongoing. Folks are somewhat tired.”

Through all of this, Christian ministers of numerous persuasions still work to share the Good News, though churches are not without conflict. 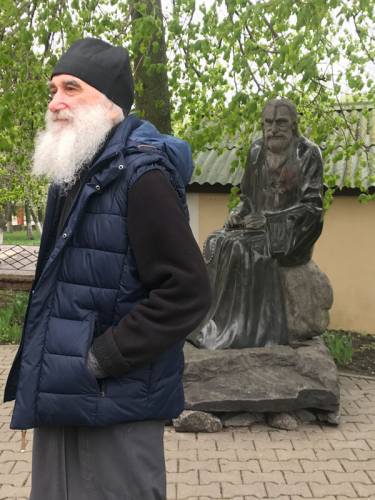 This photo was taken from the Church of St. Nicholas in Rakitnoye (Belgorod region, Russia). It shows Father Nicholas Germanskiy in front of a statue of Archpriest Seraphim Tyapochkin, a spiritual father for many. (Photo by Carl Horton)

Horton noted that most of the people whom seminar participants met with had previously worked with Presbyterian World Mission personnel and other representatives of the church.

“People risked coming to talk to us and speak openly and honestly,” Horton said. “They were brave to come and talk to us about their concerns regarding their government, about the role of the church, about U.S.-Russia relationships and the conflict between Ukraine and Russia. And they would only do that because they trust the Presbyterian Church and its mission personnel.”

McKay observed, “I’m so impressed with the Presbyterian Church’s vision of going beyond the walls of the church. … We’re investing in this to get out into the world, to do God’s ministry and also to take in what God is doing in other contexts, the Eastern Orthodox Church — very few of us have had any real contact with that.

“It’s great being able to take what we have learned here back to our congregations, to show them what our church is doing and our church’s investment in world mission, to say the Presbyterian Church (U.S.A.) is doing something, the PC(USA) is making a difference. The Presbyterian Church isn’t internally focused. We’re worldly focused, and I’m proud to be a pastor in the denomination.” 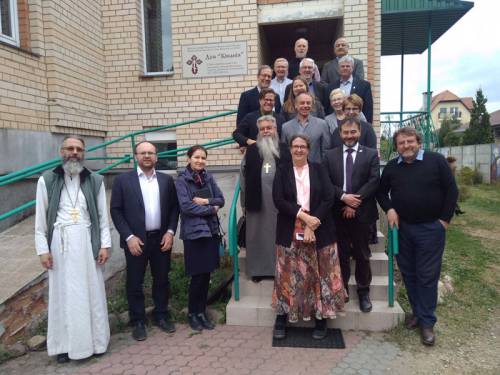 The participants and panelists gathered for the concluding session at Dom Kinonia, outside of Minsk. (Photo by Carl Horton)

Agnew noted that the participants departed the United States on Easter Sunday and celebrated Orthodox Easter (April 28) on the trip.

“One thing I will try to remember is we are all Easter people, celebrating the risen Christ,” Agnew said. “Governments come and go, but Christ remains.”