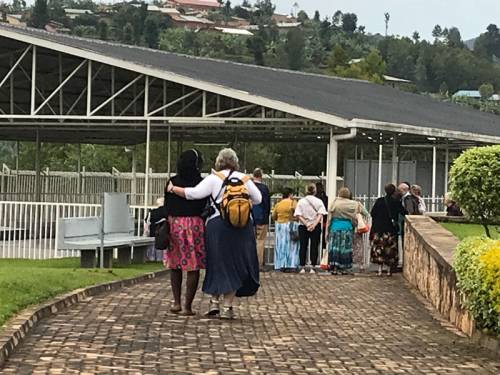 The Rev. Laura Krauss, a participant in the recent travel study seminar in Rwanda, places an arm around Grace Mugisha, the 19-year-old daughter of the Rev. Rosemarie Ibiyshaka, at the Murambi Genocide Memorial in southern Rwanda. (Photo by Carl Horton)

LOUISVILLE — Participants in this month’s Presbyterian Peacemaking Program travel study seminar in Rwanda saw much more than memorials to the genocide 25 years ago when between 800,000 and 1 million people were killed by their neighbors in a period of 100 days.

“What we’re seeing here is much more graphic than the movies,” Thomas Smart of Emsworth United Presbyterian Church in Pittsburgh said, referring to documentaries and dramas about the genocide like “Hotel Rwanda” (2004). “The movies are for public consumption, but when you see it up close and personal, you can see how they only got to the bare surface of what was going on.”

Joseph Romolen Nare, Peace Department Secretary for the Presbyterian Church of South Sudan (PCOSS), says, “I appreciate Presbyterian members from the United States, brothers from South Sudan coming to see what’s going on. We read from magazines, from newspapers and from books, but today we see the dead bodies with our eyes.”

American memorials have found different, effective ways to give weight to tragic loss in history — the sheer volume of the names on the Vietnam Memorial in Washington, D.C., the hanging steel rectangles in the National Lynching Memorial in Montgomery, Alabama.

But in the past two weeks, the Presbyterians in Rwanda walked among skeletal remains, exhumed from mass graves and preserved in classrooms at massacre sites, and skulls and bones preserved in glass cases for all to see.

“It’s pretty disturbing,” said the Rev. Carl Horton, coordinator of the Presbyterian Peacemaking Program. “But the intention is to always prove that these things happened. … So that’s the intent of visiting these sites — it’s more than just paying your respects at a memorial.”

It has been a lot to take in for the 29 participants in the travel study seminar — 19 Presbyterians from the United States, four participants from South Sudan, one from Kenya, two from the Presbyterian Church in Rwanda and three PC(USA) staff. The trip was one of three travel study seminars Peacemaking is presenting this year. In May, a group travels to Russia and the Ukraine, and in November, Peacemaking presents its first domestic trip to Puerto Rico.

Registration is still open for the Puerto Rico seminar, as well as 2020 journeys to Central America, the Philippines and Hong Kong, and the bi-annual Mosaic of Peace Conference to the Holy Land of  Israel and Palestine. 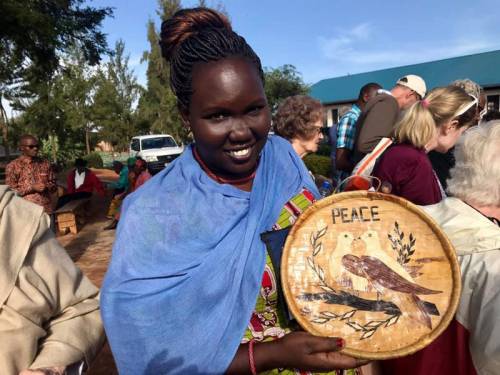 Far from tourist jaunts, the travel study seminars are journeys designed to give participants a chance to meet Presbyterian partners in parts of the world and learn about efforts for peace, justice and reconciliation in the contexts of conflict, injustice and oppression. Participants do extensive study before they travel, and the intention is that they come home and share their stories and new understanding with people in their communities and places of worship.

It’s often a taxing trip physically and emotionally. The Rwandan group gathered for a video chat following a day traveling along winding, uneven roads to see a hilltop memorial to Tutsis who held off their Hutu opponents for two months before being massacred.

“We are engaging all five senses, and engaging all the senses dramatically transforms the experience,” said Kelly McFall, a member of Grace Presbyterian Church in Wichita, Kansas. “To smell and to feel and to be in the space where these things happened can never enable us to completely understand. But it brings us much closer to understanding the experience of our brothers and sisters.”

It’s a tough story to understand.

The Rwandan genocide took place during the Rwandan Civil War, which started in 1990. In 1994, after peace talks fell apart between the Hutu and the Tutsi people, the Hutu majority directed the slaughter of Tutsis, claiming they were un-Christian and threatened to enslave the Hutu, among other accusations.

“We were told many Hutu fathers killed their own children because their mother was a Tutsi,” said Lucy Janjigian, a Californian of Armenian descent who saw ethnic and religious conflict firsthand while growing up in the midst of Arab-Israeli struggle in the 1940s and ’50s. “I cannot believe how people lived near each other, lived together, were Christian, and massacred 50,000 in one area. It’s incomprehensible and heartbreaking.”

As hard as the slaughter of even intimate relatives was to understand, the study group has also grappled with what has happened in the aftermath.

“I don’t think I’ll ever preach on forgiveness again without thinking about this,” said Paul Lent, a Presbyterian minister from the United States. “The depth of the trauma and the scale of what reconciliation really means, having been here, is something that is overwhelming — something I can’t say I fully grasp.”

One of the key biblical narratives used in the reconciliation process has been the Genesis story of Joseph, who was sold into slavery by his jealous brothers and later forgave them when they appeared before him in Egypt as a powerful leader.

It and the Rwandan story were also instructive to participants from South Sudan, who have faced their own struggles with ethnic and tribal violence.

“What I saw here is giving me hope for South Sudan,” said Lydia Peter Agolory, a South Sudanese state minister of Gender, Child and Social Welfare. “We have to work on reconciliation.”

McFall, who teaches genocide studies at Newman University in Wichita, was struck by the framework of reconciliation: “What has stood out for me is the Rwandan effort to create or construct or uncover a usable past — a shared understanding of the past that will allow people to come together and reconcile or at least live together in a way that makes future peace and stability possible.”

But he is also one of several participants to raise one of the nagging questions to emerge from the Rwandan genocide, which he frames with another biblical story.

“We have been occasionally asked, often obliquely, what we intend to do with the fact that the international community did not respond effectively to violence in Rwanda,” McFall says. “That’s a complicated issue that I will bring back to my students, and I hope my students will be better equipped to understand what the role of the world should be.”

He invokes Jesus’ parable of the Good Samaritan, who cared for a battered man on the side of the road when others passed by.

“What happens if you see a body on TV?” McFall asks. “Is that still your neighbor, and how do you know who your neighbor is? What should the role of that parable be in our lives and the lives of the people we see every day?” 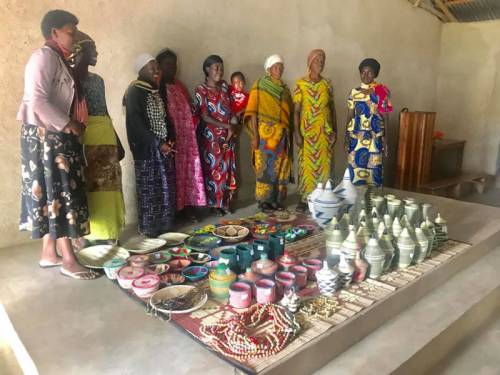 For Paula Cooper, the new PC(USA) regional liaison for East Central Africa, who is African American, the trip raised questions about what is happening at home in the U.S.

“I have asked in the last day or so, is our government in the process of a genocide?” she said. “It’s not a mass killing, and we’re not seeing it happen in a hundred days, but it’s happening over a period of time with people of color — being oppressed, not getting good jobs, unfair housing, lack of healthcare, shooting blacks in the back. Whatever that may mean, as a people over a period of time, you can tend to lose hope, with nothing to look forward to. … We have young men who don’t look beyond 15, 16 years old, because they don’t see a future.

In addition to learning the disturbingly recent history of Rwanda and the extravagant forgiveness in its wake, the travel-study participants have been able to see the country, known as the Land of 1,000 Hills — “I think we have walked or driven over all of them,” Horton says.