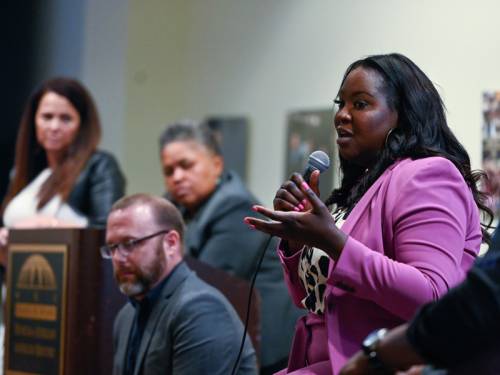 Catrina Tillman of First Trinity Missionary Baptist Church speaks at a screening of “Flint: The Poisoning of an American City” at the Charles H. Wright Museum of African American History in Detroit. Associate for Story Ministry David Barnhart is seated to Tillman’s right. (Photo by Rich Copley)

LEXINGTON, Kentucky — If a Presbyterian church is interested in discussing gun violence, Presbyterian Disaster Assistance’s Story Productions has a film for that: “Trigger: The Ripple Effect of Gun Violence” (2014).

Immigration issues? PDA has a few films, including “Locked in a Box” (2016), a look at immigration detention in the U.S. Environmental issues? You might look to “Flint: The Poisoning of an American City” (2019), covering an environmental topic that just popped back into the headlines at the beginning of 2021.

And racism? The Presbyterian Church (U.S.A.), in a collaboration with the Presbyterian Mission Agency and the Office of General Assembly, just released a new series, “Trouble the Water: Conversations to Disrupt Racism and Dominance,” last year, and Associate for Story Ministry David Barnhart will tell you that racism is a theme that runs through many, if not all, of the Story Productions films.

After more than a decade, Barnhart has developed a significant catalog of films, an endeavor that grew out of his twin passions for ministry and filmmaking fused with his work years ago as an associate with PDA in Mexico and Central America.

“I feel like our faith is rooted in story,” Barnhart said. “Story was a core part of Jesus’ mission and ministry. When he was challenged, when he was pushed, when he wanted to lift up issues of marginalization or dehumanization, he would use stories, he would use parable, and I think that’s a really core part of our work. That’s part of our calling as Christians, to be people who are connected through and see their faith through the lens of story and through narrative.”

PDA Director the Rev. Dr. Laurie Kraus says the documentaries play an important role in the ministry’s work and in the church.

“PDA’s Story Ministry keeps the story of survivors and their communities alive and provides a space of dignity for survivors to tell their own stories in their own way, rather than be the objects of someone else’s pity or charity,” Kraus says. “Story Ministry explores these stories in the context of their full complexity and invites those of us who watch and pray to step into appropriate roles of accompaniment and advocacy.

“The films and their accompanying study guides invite congregations and communities to come alongside survivors and their communities in respectful and transformative ways. They keep important stories demanding systemic cultural change before our eyes and in our hearts and are a vital element of PDA’s commitment to participate in the full cycle of disaster response and recovery, mitigating the effects of current disasters, effecting change to prevent future disasters, and centering the stories, needs and hopes of survivors.”

Those human stories are essential to getting to the truth in the films, and they are also a key to maintaining their relevance. “Trigger,” for instance, preceded some of the United States’ most notorious mass shootings, including the 2018 shooting at Marjory Stoneman Douglas High School in Parkland, Florida, that took the lives of 17 students and faculty, and the 2017 Las Vegas concert shooting that killed 60 people and wounded 411. But the film wasn’t about the headlines.

“‘Trigger’ was about the human impact of gun violence,” Barnhart says. “What is that human impact? We don’t talk about it. We see these headlines every day about shootings and oftentimes we just kind of skim over it. We don’t think about how behind every headline, there’s a sibling mourning at home, a doctor in the ER seeing this devastation every day, the teachers that are losing their students. There’s this whole ripple effect where hundreds of people are affected by one shooting. That’s behind the headlines. That’s something that they don’t talk about. So, with ‘Trigger,’ that’s what we tried to do.”

While most of the situations Barnhart approaches have made headlines, Barnhart says he and editor Scott Lansing work to keep those from coloring the story they ultimately tell. He also says they are very interested in untold and under-told stories that are important but have not been before national audiences. 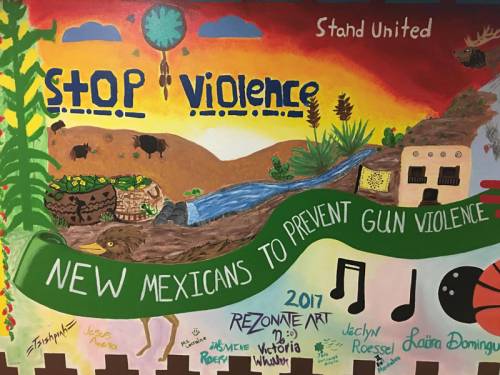 A mural at Pojoaque Valley High School in New Mexico, one of many communities affected by gun violence. The mural was a project by the organization New Mexicans to Prevent Gun Violence. (Photo by David Barnhart)

Most visits to communities they are considering working in start with simple conversations. No cameras. And even when the cameras come out and the lights go on, an interview can be just a step toward deeper truths. That is a process that continued in 2020, even as the COVID-19 pandemic grounded Barnhart, along with all other PC(USA) staff.

Barnhart was exploring several projects and making initial visits early in the year before everything came to a halt. But he has tried his best to keep going, preparing projects for the day he can get back out behind the camera.

“It’s been a challenge just to do interviews on Zoom,” Barnhart says. “It’s just not the same. There’s something about being in the room with someone and having a conversation. You kind of create this safe space where you’re both sharing.

“It’s tough to be sitting in your bedroom or in your living room doing this work. There’s something that’s just not the same about it. So, we are trying to adjust and have been doing virtual screenings and interviews. It’s not how you want to do it, but it is the reality.”

In addition to the world of filmmaking, COVID-19 has also changed the world of film distribution, closing many theaters and group exhibition venues and putting a stronger focus on streaming services. “Flint” and “Trigger,” for instance, are both available on Amazon Prime and other streaming platforms. Barnhart says for the films to be effective they need to be aware of the shifting distribution channels, particularly as the films have successfully made their way into the mainstream film festival and documentary communities.

That is all rewarding, Barnhart says, but the goals remain the same.

“We’re just going to keep focusing on these films as resources and using them for community engagement,” he says. “That’s our goal. We want these films to be resources for churches and communities to engage these issues.”