Share God’s love with our neighbors-in-need around the world through One Great Hour of Sharing.
Make A Donation Click Here >
Home › Stated Clerk discusses attack on the Capitol in online chat 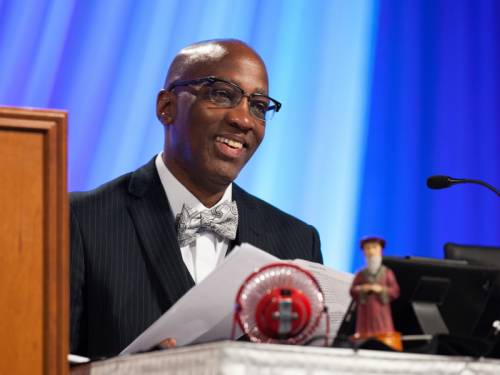 LOUISVILLE — In the wake of last week’s riot at the U.S. Capitol and the second impeachment of Donald Trump, the Rev. Jimmie Hawkins and the Rev. Dr. J. Herbert Nelson, II, sat down together for a powerful online chat Thursday about the fractured state of the country.

While Nelson, the Stated Clerk of the General Assembly of the Presbyterian Church (U.S.A.), and Hawkins, who is Associate Director of Advocacy for the Presbyterian Mission Agency, reflected upon the riot, they also hammered home the importance of churches addressing the underlying problem of white supremacy and the need to push back against the racist forces threatening to destroy the country.

The church must “hold our ground in terms of justice and freedom and equality … never forgetting that Jesus gave his own life so that others might be free — so that we might be free — and have an opportunity to build the bridges of hope for another generation,” Nelson said.

Nelson was responding to comments by the moderator, the Rev. Christian Brooks of the Presbyterian Office of Public Witness about how religion was misused by some of the Trump-supporting rioters who stormed the Capitol on Jan. 6. The mob, instigated by the president, was trying to derail the ceremonial counting of electoral votes that were eventually certified for President-elect Joe Biden.

“The people that were storming the Capitol felt like that Jesus sanctioned” a God-ordained revolution to get their power back, said Brooks, who works on domestic issues for OPW, which hosted Thursday’s chat on Facebook.

“On one side, you have those of us who believe Jesus was a liberator, Jesus was an activist, Jesus came to set the oppressed free,” Brooks continued. “However, you have, on the other side, where Jesus is being used to oppress others. How do we deal with that tension as people of faith?”

Nelson said it’s important to tell the truth about faith. “Jesus was an outcast and he, too, would have been somehow or another damaged in that march on the other day.”

Nelson also expressed concern about theology that is “all about us and our salvation but not about the world in which we live” or that somehow interconnects salvation with wealth and what is to be gained.

More than 400 people watched the live airing of the webinar, which is part of a new series by OPW.

Taking a historical perspective, Hawkins stressed the need to be honest that white supremacist theology has always been a part of the Christian church in America. 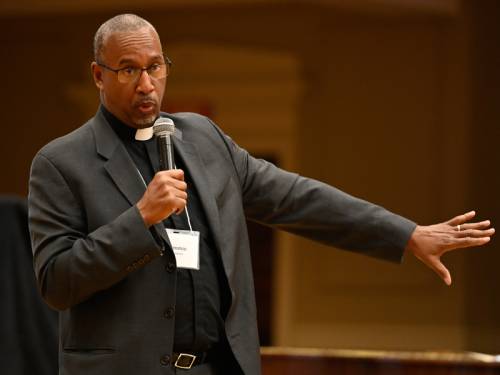 The Rev. Jimmie Hawkins is the PC(USA)’s Associate Director of Advocacy. (Photo by Rich Copley)

“We worship a first century Palestinian of brown skin and yet, you can rarely go into a Christian church today, and ironically, Black or white, without (seeing) the image of a white Christ,” Hawkins said, adding that the disciples are usually depicted as European.

“Our clergy do not challenge white supremacy in our local congregations,” he said. “People get upset: ‘You’re bringing politics into the life of the church.’ But we have to preach the Good News of the Gospel, which brings us together and helps us to overcome all of the baggage that we bring to church from our lives.”

Faith leaders from various faith traditions are among those who’ve spoken out against Trump since the attack on the Capitol that left at least five people dead. However, Trump already had spent years in office, pouring salt into racial and ethnic wounds and using evangelical Christianity to garner support. This culminated with the attempted siege at the Capitol, which took place on the heels of repeated claims by Trump that the election was stolen from him.

“This (riot) was a significant event and it was a frightening one,” said Nelson, who previously worked on the Hill while leading OPW before Hawkins assumed the role.

The incident at the Capitol was “the epitome of everything we feared would happen,” instead of the kind of peaceful transition that OPW and others had been calling for, Hawkins said.

Following the riot, Nelson joined about two dozen other faith leaders in signing onto a National Council of Churches open letter calling on U.S. officials to remove Trump from office, and lawmakers have begun moving in that direction.

The House voted Wednesday to impeach Trump on a single charge of inciting an insurrection. They also called for him to be removed and disqualified from holding public office again.

“We know that the President of the United States incited this insurrection, this armed rebellion against our common country,” House Speaker Nancy Pelosi said just prior to the vote, according to CNN. “He must go. He is a clear and present danger to the nation that we all love.”

The vote — marking the first time in history a president has been impeached twice ­— sets the stage for the second Senate trial of the president in a year, according to The New York Times.

Hawkins and Nelson, who are both well familiar with the Capitol through their advocacy work for PC(USA), expressed concern about rioters’ ability to breach the building, although security had seemed tight there in the past.

“I still remember sitting and watching the rioters surround the Capitol,” Hawkins said, and then as they breached the building, thinking “What in the world is going on? How can this happen? … It was a horrible day for America.”

Hawkins said it’s time for the country to reckon with the racial divisions that are festering on a national and local scale, impacting everything from school achievement to incarceration rates, and now leading to insurrection.

“It’s got to be known the biggest dangers to this country, I believe, to a large degree, are internal,” he said. “We are a country almost literally at war,” and the civilian population is heavily armed.

Nevertheless, the Reformed church must stay focused on the work of justice, said Nelson, who at the same time acknowledged that “there are so many enticements to try and make church a gimmick, so that we can get more members.”

Instead, “we have to be very vigilant,” and to recognize the “sacrifice that our Savior made for us and what that really meant in challenging powers and principalities to do better — to be better.”

To watch a recording of Thursday’s webinar, go here.