Nelson urges churches to step up and speak out 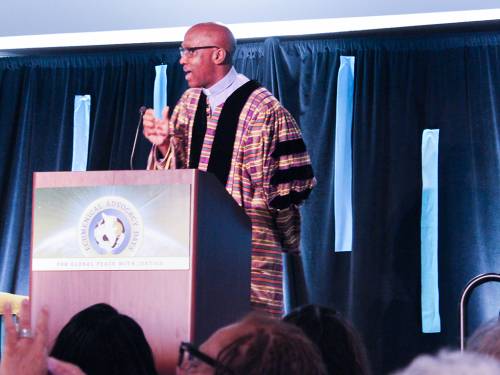 WASHINGTON, D.C. – The Rev. Dr. J. Herbert Nelson, II is calling on Christian denominations to stand firm on social justice issues and get involved. The Stated Clerk of the Presbyterian Church (U.S.A.) gave the Sunday morning message to the nearly 1,000 attendees in Washington, D.C.

Nelson told the group that the nation is at a critical time and people are afraid.

“There is confusion in our land concerning who we are as a nation. We are found on plurality, freedom of religion. We are a nation where communities are afraid to wear a head dress, Islamic groups fear being labeled as members of ISIS,” Nelson said. “We stand in the way of those who come to this country and declare we are going to put up a wall. Yet, when we see the homeless, those who are struggling and can’t make a decent livable wage, what are we saying as a people who tolerate such madness?”

Nelson said the nation is being led by millionaires and the wealthiest cabinet in U.S. history, adding that health care is threatened and people are still working in poverty.

“It is not easy work, plans change, things get in the way,” Nelson said. “Only a remnant generally does the work, because it’s not for the faint of heart, but the faithful, those who know that our lives today are not only ours but belong to God.”

Nelson believes that in order for the nation to move forward, the individual blinders must come off.

“We need to learn to love one another again and love Jesus enough that differences don’t hurt relationships. There so many divisive factors that will stand in our way and challenge us when we get real. There’s a cross for everyone,” he said. “We need to put the cross back into Christianity. We need to regain a sense of theology of the cross. We want resurrection without facing a cross, that’s the problem with modern-day churches.” 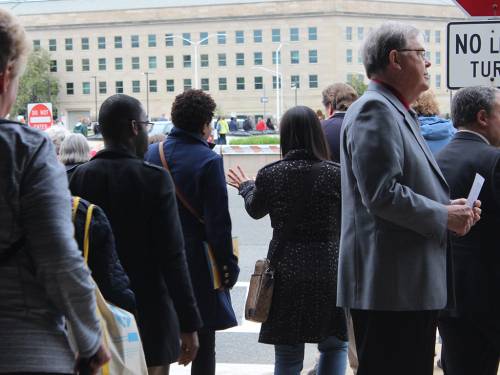 Attendees at Ecumenical Advocacy weekend conduct a prayer walk to the Pentagon. (Photo by Rick Jones)

Nelson challenged the audience to meet with their congressional representatives, reminding them that they all will eventually come up for re-election. He credited young people for being the ones to lead the charge today.

“Young people are the ones willing to get arrested, threaten their future job security in government jobs and elsewhere for getting into trouble for what is right,” Nelson said. “Occupy, Black Lives Matter, they are being faithful in their youthfulness with reckless abandon and will not live in a society with those who run amuck with their power and leave too many people behind.”

Nelson said more and more African-American males are dying and that “racial apartheid” is plaguing the country while we build more prisons that show the failure of education. He said the church must come out of hiding.

“Our calling is to start a new global revolution, to build a revolution that expands so those who are locked out might be brought in and work together as we never have before,” Nelson said. “We must strip the internal core of congregations, determine where we can be effective. Each congregation makes a difference but we must know where our strength lies, make them spiritual and justice-oriented.”

Nelson ended his sermon by telling the crowd that if their church is not doing social work, they need to find another church.

After a series of plenaries and workshops, attendees ended the day with a prayer walk to the Pentagon. On Monday, they headed for Capitol Hill to meet with congressional representatives.

This was the 15th year for Ecumenical Advocacy Weekend. More than 200 Presbyterians participated.

The Peace & Global Witness Offering supports Presbyterian ministry engaged in the Christian witness of peacemaking and reconciliation. It invites individuals and congregations to deepen their involvement in God’s work of reconciliation in cultures of violence by providing educational resources, connections to global peacemaking leaders and supporting advocacy efforts on the global level.