LOUISVILLE – From across the United States and the world, indigenous peoples and their allies have gathered at the Camp of the Sacred Stones, north of Cannon Ball, North Dakota, near the Standing Rock Sioux Tribe reservation’s northern border. Members of the tribe took the initiative in this witness to protect their sacred sites and waters from environmental harm and to affirm tribal sovereignty and Treaty rights. 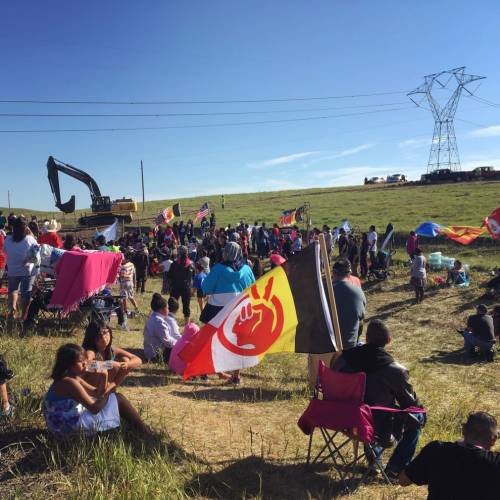 Water protectors congregate next to a construction site for the Dakota Access Pipeline on Monday morning, as a crew arrives with machinery and materials to begin cutting a work road into the hillside. The flag in the foreground belongs to the American Indian Movement. (Photo by Daniella Zalcman)

The people, known as water protectors, have come together in an effort to stop the Dallas-based company Energy Transfer from piping Bakken oilfield crude oil underneath the Missouri River, the main source of drinking water for the tribe. This project is known as the Dakota Access Oil Pipeline (DAPL).

The witness of the water protectors has touched the conscience of people and nations around the world to stand in solidarity with Standing Rock. Out of our faith, Presbyterians join them.

Recognizing the call of Jesus to stand with those who seek justice, Presbyterians have supported the water protectors in prayer. We have traveled to Standing Rock and have made financial contributions and provided supplies. We have signed petitions, made phone calls, and written letters to public officials and corporate leaders.

And we have grieved as the response by law enforcement has escalated. Dave Archambault II, Chairman of the Standing Rock Sioux Tribe, has written a letter to U.S. Attorney General Loretta Lynch in which he notes, “state and local law enforcement have increasingly taken steps to militarize their presence, intimidate participants who are lawfully expressing their views, and to escalate tensions and promote fear.”

In the face of this escalating response, there are several ways to stand in solidarity with the water protectors:

The synod will send a confirmation to the donor that the funds were received and then information about where they were distributed. Please make sure to include your name and address on the check unless already printed on it.

Native American Presbyterians continue to monitor the situation and will provide updates on ways to support the effort at Standing Rock, and across the country, to protect water, land, and tribal rights and to maintain harmonious relationships with the earth.