Group looks for clarification from Stated Clerk as it moves ahead 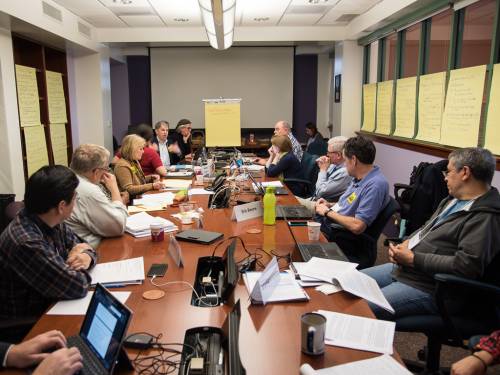 Jim Wilson (top left) speaks to members of the Six Agency Review Committee of the PC(USA) during their Feb. 21-23 meeting in Louisville. (Photo by Gregg Brekke)

LOUISVILLE – The Six Agency Review Committee commissioned by the 222nd General Assembly (2016) of the Presbyterian Church (U.S.A.) met here this week to begin the process of discerning their goals and hear from representatives of the six agencies that comprise the denomination.

Representatives nominated by the assembly were called upon to “look at the overall effectiveness of the whole” denomination in the spirit of a similar resolution from the 218th General Assembly (2008), which reported to the assembly in 2010.

Kerry Rice, director of ordered ministries and certification in the Office of the General Assembly and staff resources to the committee, said the 2010 review should be considered a “roadmap for the work ahead,” adding, “We can be informed by it, but don’t have to be bound by it. … But the intent is the same — to review the six agencies and see how they work together in this Presbyterian universe.”

Calling their work a “rather large, if not ambiguous task,” committee Moderator Deborah Block, pastor of Immanuel Presbyterian Church in Milwaukee, asked participants to consider as one of their primary tasks “how the system is working together, or not.”

The ambiguous nature of the committee’s task came into focus as members wondered where their work overlapped, conflicted with or introduced redundancies with the work of the Way Forward Commission and the 2020 Vision Team.

A review of the Way Forward Commission’s timeline, and where input from the Six Agency Review Committee fit into the commission’s work, led Block to assert, “We are going to have to press the candor value with Mark [Hostetter] in terms of being clear about what collaboration really means here, and if we are going to co-labor or if we’re going to duplicate labor.”

On the preliminary list for review by the committee are several areas that seek to answer the following questions, in addition to others:

Kelly Shriver, pastor of Emmanuel Presbyterian Church in West Linn, Oregon, said she was “not married to six agencies. I’m not interested in sustaining something that isn’t working for us,” adding she had “very little sentimentality” toward the current structures of the PC(USA) should the committee’s conclusions from these questions include recommending a new organizational model.

Nelson, Stated Clerk of the PC(USA), informed the committee that he’d recently received a formal request to interpret the intent of the General Assembly in its formation of the Way Forward Commission, the 2020 Vision Team and the Six Agency Review in order to provide clarity to each group’s work.

“We’re going to be working on that, discerning what the assembly was really asking of each of the committees. We’ll give clarity on this as soon as possible,” he said.

“What I think the three commissions that have come out of this — All Agency, 2020 and Way Forward — has come out of the relative confusion and chaos the denomination has faced. I’m not sure whether people had the same thing or different things in mind when they proposed them. They came out of three different areas and we ended up with a mishmash of trying to fix something by creating all these ways of doing [it], which have some of the same ideas in mind of what needed to be addressed. There are many ways the church, the GA, has decided to deal with this.”

Saying the word “enough” had been heard throughout the church regarding the function and role of the national denomination, Nelson said of his time visiting churches while he served as the director of the Office of Public Witness, “I was the person from the national church—and there was a rising level of ‘enough’ and it’s time to do something about it.”

Saying he hopes “to move as expeditiously as possible,” Nelson said the task of looking through video footage from the General Assembly floor discussions and subsequent documentation would help him “consider the intent of what was brought to the floor” before reporting back to the groups.

“I received it yesterday and have been praying over it. Tomorrow, I will begin to sit with folks and consider it,” he said on Wednesday afternoon. “The Stated Clerk does have the task of interpretation.”

At the conclusion of the meeting, committee members split themselves into three working groups to continue their known work while awaiting further instruction from the Stated Clerk. The mission/vision, cross-agency and cross-committee relations, and resources groups will meet via conference call in the coming weeks with the anticipation of the committee’s next scheduled meeting May 1–2 at a yet-to-be-determined location.

The final report of the Six Agency Review Committee is due to the Office of the General Assembly by Feb. 16, 2018 — 120 days prior to the beginning of the 223rd General Assembly of the PC(USA) in St. Louis.