For their cultural humility training, boards hear from Baltimore panel that dealt with the aftermath of Freddie Gray’s death 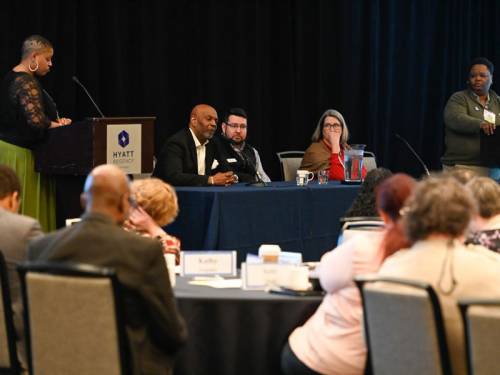 The Revs. Denise Anderson, left, and Shanea Leonard, right, bracket a Baltimore panel invited to provide cultural humility training Thursday to a joint meeting of the Committee on the Office of the General Assembly and the Presbyterian Mission Agency Board. That panel, left to right, is the Revs. Michael Moore and Mark Hanna and Susan Krehbiel. (Photo by Rich Copley)

BALTIMORE — Rather than tell Thursday’s joint meeting of the Committee on the Office of the General Assembly and the Presbyterian Mission Agency Board about cultural humility, the Revs. Denise Anderson and Shanea Leonard showed those in attendance by inviting local voices to share their experiences.

The two, who work with the Presbyterian Mission Agency’s Racial Equity and Women’s Intercultural Ministries, invited three Baltimore panelists to talk about what happened in Baltimore following the April 2015 death of Freddie Gray, who died from injuries sustained while he was being transported by the police following his arrest. Rioting, fires and violence followed Gray’s death.

“We formed a group called Apostles of Reconciliation,” Moore said. “It made everyone uncomfortable, but we held the tension of that to get to a proposal around the idea of dismantling racism.”

“It was a raw place,” said Hanna, who serves a mostly white church four miles north of downtown Baltimore. “We wanted to respond as an institution, but we’re not equipped to do that … We turned to African American leaders in the community and said to them, ‘We need you to lead us,’ which led to this place of, ‘We have a lot of work to do here, and that’s where we think we should start.’” 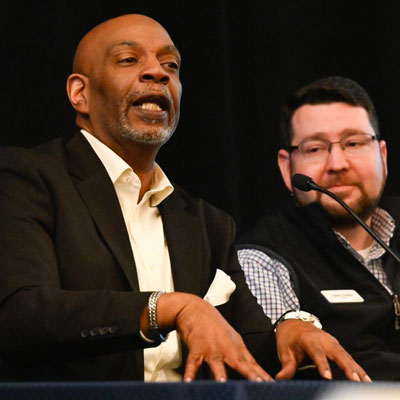 As a presbytery, “We can’t be the professionals who know what to do,” Moore explained. “We have to sit and listen to people on the ground who can tell their stories in such a way as to inform us and inspire us to be better Christians.”

“You can do ministry in the suburbs where you are,” Moore said, “but you have to be conscious and awake … We don’t need tokenism. We need white allies. You go. You preach the gospel, then you get people of color willing to come to the table.”

“We were not connected to the community the way we needed to be. Freddie Gray’s death brought that home to us,” Krehbiel said. Early on in the process, “people said, ‘We want this mandated. We can’t do it as individuals,’” she said.

“I left the training feeling I had learned and grown and that there is so much work to do,” Hanna said.

The day after an adult education series on implicit bias ended, the church learned that a white woman in the neighborhood directed a racial slur at thee middle school students. The Baltimore Sun picked up the story.

Hanna and other church leaders contacted the school principal and put out a statement calling out the woman’s epithet, a statement the Sun also published. The following Sunday, neighbors wrote messages on the sidewalks leading to the school, encouraging students.

“If not for the training,” he said, “I’m not sure I or my congregation would have been equipped to know what to do to preach the gospel to our neighbors.”

“There’s been a lot of listening,” Krehbiel said. One reality became clear: People don’t want the police “to disappear,” she said. “We want justice for Freddie Gray, but we need their presence and we need them to be a community partner.”