LOUISVILLE —One was a former school administrator who had instituted energy-saving measures at schools he oversaw and brought that same passion to his work with the church. Another was concerned with climate change and felt collective action was necessary to reverse the damaging effects of relying on fossil fuels.

Whatever the reasons, this coming Monday will be the first Earth Day on solar power for the members of Spencer Presbyterian … all seven of them.

“If you just look at the math, you can see, ‘Oh, well, can we raise another $100 a month? If we can, we can do this,’” says Brenda Wilson, an elder at the church in a town of just over 2,000 people, about an hour northeast of the West Virginia state capital of Charleston. “That’s that lightbulb moment where you say, if we can do this, we should do this because it will save us money in the long run, it’s good for the environment, we might be helping to ameliorate the effects of climate change, and it might be helping our great grandchildren — or even our grandchildren or our children.”

Jessica Maudlin, Associate for Sustainable Living and Earth Care Concerns for the Presbyterian Hunger Program, says, “The rise in global temperatures resulting from carbon gas emissions has impacted our climate in a variety of ways. Americans use 40% of the world’s oil and emit 25% of the world’s greenhouse gases, even though we are less than 5% of the world’s population. Changes made by those of us in the U.S. are critical in terms of a greater impact because of our energy usage.”

Doing the math told the Spencer congregation payments on a 10-year $43,000 Restoring Creation Loan from the Presbyterian Church (U.S.A.) Investment & Loan Program Inc. at 2.5% interest was just a slight bit more than the church’s monthly electric bill. And once the loan is paid off, the church owns its energy source and has to pay only a base of $20 each month to be on the electric grid. The church also received a $10,000 PC(USA) grant and kicked in $6,000 from its facilities fund to pay for the $59,000 project.

Sweetening the deal is that the electric company will store the excess energy the church produces during the warmer months of the year so that it can be used during the winter, when solar energy isn’t as plentiful. So, Wilson says, solar should cover 95% to all the energy needs for the church, which houses an independent day care for nearly 50 people, including staff, during the week.

In addition to the solar panels, Spencer has switched to non-disposable dining materials, except for napkins; is working with the local Walmart encouraging it to become a drop-off recycling center and reinstituted its Adopt-a-Highway program. Wilson also noted that the church’s pastor, Rev. Julie Hitsman, has been presenting an environmental liturgy and is doing a “carbon fast” for Lent (you can download the calendar on the church’s home page). Spencer will also celebrate outdoor worship at the end of Pentecost. 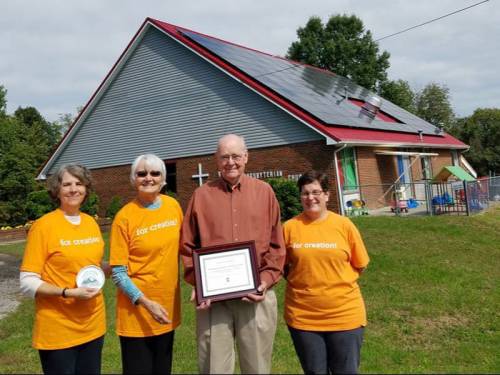 “We applaud newly ECC certified, Spencer Presbyterian for all the ways they’ve chosen to care for creation — but specifically for choosing to pursue this method of doing so by installing solar panels that create power from renewable sources and decrease the discharge of gasses that contribute to climate change,” Maudlin says. “While at times installation and maintenance costs prevent individuals or congregations from using solar energy, recent years have shown a reasonable amount of growth in solar energy. In the last decade, its production increased by approximately 38%.”

The church worked with Solar Holler, a company based in Shepherdstown, West Virginia that first worked up a plan for the church based on research through Google Earth before coming out and getting to work.

When the solar panels were dedicated in June, Solar Holler presented a talk about solar panels, and several people added solar panels to their homes. A nearby Presbyterian church is also looking at adding solar panels. 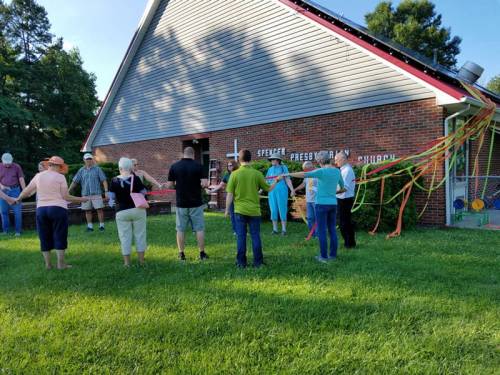 “I do think it has become a bit of a model, and people come up to me and say, ‘Boy, I’d really like to do this. I just don’t know if I can,’” Wilson says. “I say there are several places in West Virginia that do this, and they’ll come out or look on Google Earth and help you figure out if it’s feasible.”

But she says despite the high-profile move, the church has not received any pushback from the community.

She observes, “It’s probably the best thing as a group of seven or eight people we could do for the environment.”

The work of the Presbyterian Hunger Program is supported by the One Great Hour of Sharing Special Offering. Click here to learn more and give.