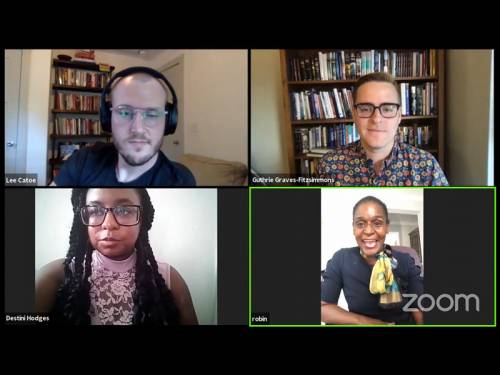 LEXINGTON, Ky. — Tuesday evening on the PC(USA) web series “Just Talk Live,” Tennessee U.S. Senate candidate Robin Kimbrough Hayes recalled speaking at a town hall a few days earlier when she turned to the Bible and the passage in Ezekiel 37 about the Valley of Dry Bones.

She put the Scripture, often seen as a prophecy about rebirth and renewal, in the context of the present day and, “victims of hate, people who lost health insurance, are scared,” and other situations.

“I got an email from a constituent who said they had been struggling with their faith … in the light of the climate of our nation,” said Hayes, an attorney and ordained elder in the United Methodist Church. “But she said what she heard that night gave her hope.”

As a progressive Democrat, Hayes doesn’t fit the profile of candidates usually heard talking about their faith on the campaign trail. Conservative Evangelicals have dominated mainstream discussion of faith and politics in recent decades, she said. But Tuesday, she joined a discussion about raising progressive faith perspectives in the United States political discourse on “Just Talk Live,” a weekly web series from Unbound, the online Christian social justice journal of the Advisory Committee on Social Witness Policy. Promoting Hayes’ appearance, Unbound did note that neither it nor the Presbyterian Church (U.S.A.) endorses specific political candidates.

Hosts Lee Catoe, managing editor of Unbound, and Destini Hodges, associate for recruitment and relationships for Young Adult Volunteers, said they timed the conversation as a bit of a post-Fourth of July theme, but it is also a conversation that is taking place in a political environment driven by the COVID-19 pandemic, the uprising for racial justice following several high-profile police killings of people who are Black and a polarizing presidential election that has seen religion invoked numerous times.

Joining the conversation was Guthrie Graves-Fitzsimmons, a fellow with the Faith and Progressive Policy Initiative at the Center for American Progress and founder of The Resistance Prays, an online devotional “focused on spiritually and politically defeating Trumpism.”

Graves-Fitzsimmons, the series’ first repeat guest, said he grew up in a politically engaged home with parents who were labor organizers and members of a progressive Methodist church.

“I saw social and economic justice and the teachings of Jesus Christ as two sides of the same coin,” Graves-Fitzsimmons said. “But then I discovered a disconnect when I was 13 and President George W. Bush, another Methodist from Texas, claimed God ordained him to invade Iraq, which was an illegal and immoral invasion that cost hundreds of thousands of lives and was one of the worst disasters in American history.

“I discovered at that moment that conservatives had a very different idea of what it meant to follow Jesus.”

Following Jesus, Catoe said, is to him the key to his political stances, as opposed to standing for a political party or movement, and that was echoed by the guests.

Graves-Fitzsimmons acknowledged a discomfort on many sides of the political spectrum with mixing religion and politics. But he framed the separation of church and state as being a device to ensure a pluralistic society and protect churches from government control. That, he said, does not preclude people from bringing up faith in discussions of political issues, particularly when faith informs a person’s political opinion.

And for Hayes, who faces four other Democratic hopefuls in Tennessee’s Aug. 6 primary election, her faith definitely informs her view of many issues, particularly when it comes to poverty and health care.

“We need to fight for justice, and we do that with the tools God has already given us: grace, love and mercy,” Hayes said. “I’m going to come with it. Whether Republican, extreme right, no matter what they bring, I’ve got something stronger to bring because the Bible says the weapons of our warfare are not carnal, but they are mighty unto God for pulling down strongholds.”

The guests said they did see a stronger progressive Christian voice coming out of the pandemic and uprising, particularly as they uncover issues of racism and poverty that are directly addressed in Scripture such as Matthew 25. And they said they particularly see that movement in younger Christians. Graves-Fitzsimmons said one of his most inspiring recent experiences was talking to a PC(USA) youth group in the Dallas area that told him about experiences such as work on the U.S. southern border.

He encouraged young people to hold onto their optimism, saying, “the questions are very simple: Everyone should have health care. Everyone should have their basic needs met. No one should go hungry. No one should have any lack of shelter; the belief that all people on Earth are equal. These are basic things you’re told if you’re raised in the church, that you read in the Bible. And these basic concepts you hold onto at a time when people say, ‘We can’t be carbon neutral,” “No, for this reason or that we have to invade this country,’ or when they say, ‘These people have to be killed.’

“All these ways we’re told ‘this is the way the world works,’ reject that and hold onto a very simple sense of right and wrong that young people are leading us with right now.”

Hayes said, “Jesus was a progressive. He was looking at things through a totally different lens, trying to move the community forward. As progressive voices, we’ve been called to do the same and speak like Jesus did, affirming love and humanity.”

“Just Talk Live” shows at 6 p.m. Eastern Time on Tuesdays on the Facebook page of Unbound: An Interactive Journal of Christian Social Justice. For an index of previous episodes, click here.