About 200 clergy prayed before a peaceful march in Houston 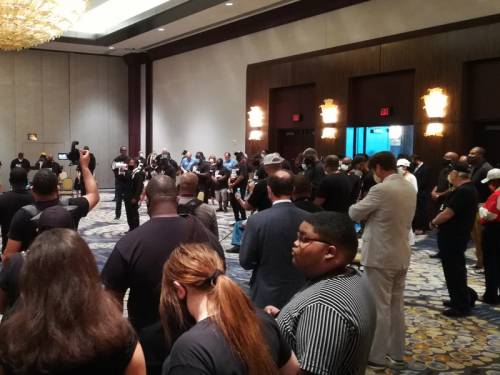 Before the peace march began in Houston, approximately 200 clergy leaders met for prayer at the Hilton-Americas Hotel. (Photo courtesy of Interfaith Ministries for Greater Houston)

LOUISVILLE — Before some 60,000 supporters met together at Houston’s Discovery Green park to join the family of George Floyd in a peaceful march to City Hall this week, about 200 clergy from diverse faiths, ethnicities and backgrounds gathered in the ballroom of a nearby hotel to pray.

The Rev. Dr. Jim Gill, interim pastor of Joyful Life Lutheran Church in Magnolia, Texas, and a retired minister of several Presbyterian churches over his 40-year career, learned about the clergy gathering through the Rev. Lynn Hargrove, general presbyter for the Presbytery of New Covenant. Hargrove was notified about the event by Interfaith Ministries for Greater Houston, a United Way Agency.

Gill gathered with other clergy leaders who met for prayer in the ballroom of the Hilton-Americas Hotel, across from Discovery Green. A rabbi, an imam and a Protestant minister prayed, as the other faith-based leaders — wearing masks due to the COVID-19 pandemic and following social-distancing protocols — shared their commitment to justice and peace in solidarity.

Floyd was born in North Carolina but grew up in Houston’s Third Ward. He moved to Minneapolis six years ago to find work. On May 25, Floyd was detained by the police in Minneapolis, handcuffed and restrained with an officer’s knee to his neck for 8 minutes and 46 seconds. During these last few minutes of his life, Floyd is recorded on video saying 12 times, “I can’t breathe.” These words have become a rallying cry to end racism, violence and brutality toward African Americans once and for all. 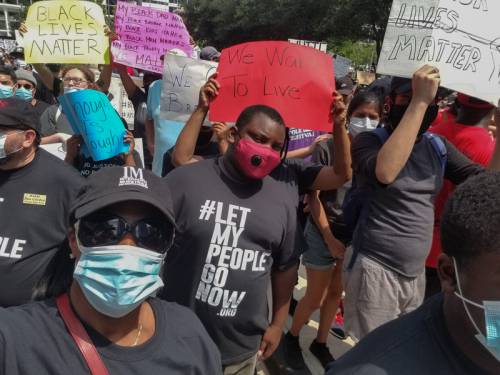 The family of George Floyd requested a peaceful march and Floyd’s hometown of Houston honored that request. News reports confirmed very few issues during this nonviolent gathering of thousands to call for justice for Floyd. (Photo courtesy of Interfaith Ministries for Greater Houston)

Tuesday’s peace march was organized with leadership by Houston rappers Trae the Truth (Frazier Thompson III), a longtime friend of Floyd, and Bun B (Bernard Freeman), who never had a chance to meet Floyd. It received wide community support with participation by elected officials, activists and others in the community.

It was just a little over a year ago that Gill gathered with other faith leaders at the River Oaks Islamic Center for a prayer vigil in solidarity against hate, after a lone white supremacist gunman killed 51 people worshiping in two mosques in New Zealand. He also gathered with other faith leaders at Congregation Beth Israel in 2018 to pray following the shooting at the Tree of Life Synagogue in Pittsburgh. All these prayer gatherings were called together by Interfaith Ministries.

In a written statement, Interfaith Ministries for Greater Houston expressed condolences to the Floyd family and prayed for constructive and relevant action and policy change — but more importantly, the changing of hearts and minds. Here’s an excerpt:

“Our hearts and souls are troubled and saddened in the death of George Floyd. To his name, though, we know we could add many more, recognizing that the trouble we feel in our hearts: the anger, the grief, the loss, the rage, is not only for the death of a child of Houston, but we are also troubled, emboldened and stirred as we wrestle and struggle for a more just society, a society that must come to terms with historic inequalities, and then must do something about them.” 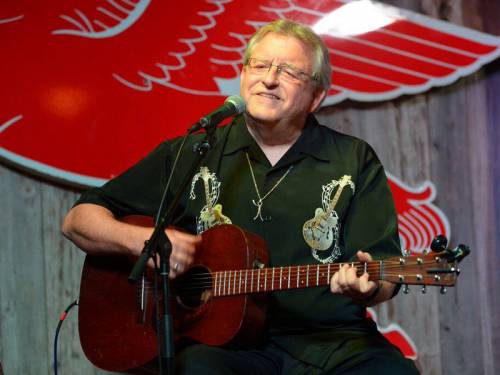 The Rev. Jim Gill retired in 2018 after serving 40-years at several Presbyterian churches in Texas. He wrote a song more than four decades ago titled “United Saints of America,” unity, he says, is needed for such a time as this. (Contributed photo)

Gill wrote a song 44 years ago during his last year at Austin Presbyterian Theological Seminary. This week he posted it to the YouTube channel he launched on Pentecost Sunday, feeling it appropriate for the times America is going through now. Here’s a verse from “United Saints of America”:

“Callin’ all Christians throughout this land

quit clenchin’ your fists and open your hands

and become the United Saints of America.”

Gill said he grieves that it has taken yet another tragic loss of life to bring racial injustice and inequity to the forefront nationwide. This time, he hopes this challenge will be dealt with, as an even greater tragedy would be for nothing to change.