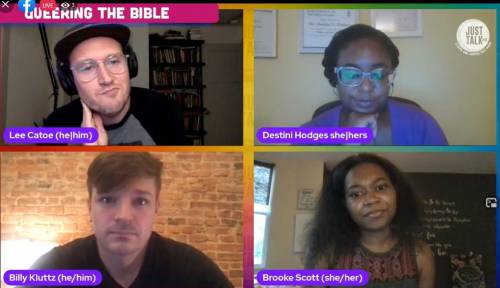 The Rev. Lee Catoe and Destini Hodges, co-hosts of “Just Talk Live,” interviewed the Rev. Billy Kluttz, an associate pastor at Govans Presbyterian Church in Baltimore, Maryland, and Brooke Scott, a preacher and social worker, on this week’s show.

LOUISVILLE — As a queer woman, Brooke Scott has an affirming view of who God is.

“I’ve been really excited about seeing how queer people actually reflect something about God,” said Scott, a certified candidate for ministry in the Presbyterian Church (U.S.A.). “If we paid more attention, we would be able to see the ways in which God herself is so much bigger and so much broader and created queerness for a reason, because it exists in herself.”

Appearing on the PC(USA) talk show “Just Talk Live,” Scott said that God, the Creator, is beyond gender and transcends “anything that we could ever imagine.” In another example, she talked about the Holy Spirit having “a feminine image that is lifted up, I think, more often now.”

Scott, a preacher and social worker, shared her perspective during this week’s “Queering the Bible” episode of the online talk show co-hosted by the Rev. Lee Catoe and Destini Hodges.

The episode focused on “how we see the Scripture through our experience as queer people,” Catoe said. He noted that queering also can refer to disrupting what is the norm or the status quo.

Scott shared the spotlight with fellow guest the Rev. Billy Kluttz, an associate pastor at Govans Presbyterian Church in Baltimore. 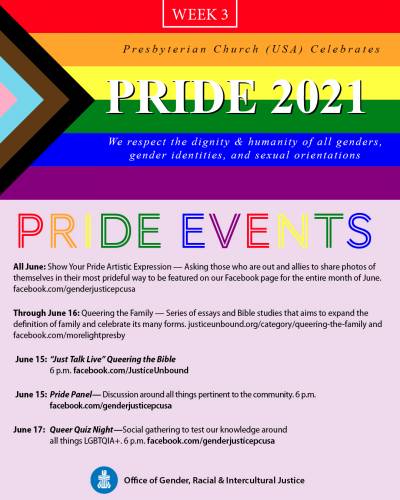 Here are some upcoming events for Pride Month. The full calendar is at https://bit.ly/2So26Pu.

The episode was part of the show’s celebration of Pride Month, which honors the LGBTQIA+ community. Early on in the show, both guests were asked to tell what Pride means to them.

Scott, who is bisexual, said that even within the queer community, there are stigmas and that she has sometimes felt invisible. But Pride is an opportunity to say, “I count. I matter. I am included.”

Kluttz said that for him, Pride is a reminder that “queerness is a gift, that it’s something that connects me with others, that makes me, I think, a more effective pastor.” Furthermore, “it’s not a burden. It’s not a weight. It’s a gift and I’m so grateful for that and for the ministry of the Presbyterian Church (U.S.A.) to really live into that giftedness that comes from God.”

Discussing the Bible, the guests noted that there are examples o           f relationships, such as Jonathan and David’s, that may represent same-gender intimacy. “I think that reading has to stand alongside the traditional, I would say heterosexist reading of the text, right?, because it’s often about assumptions,” Kluttz said.

Looking to the future, he stressed the importance of queer people creating new liturgies. “There’s all sorts of spaces where the church has this gift of liturgy that we can offer,” he said, “and I think our generation is really one to write and formalize and start canonizing that into the body of Christ more broadly.”

Near the end of the show, Catoe asked the guests to offer advice to queer people who are going through rough times or thinking about coming out.

Kluttz, a podcast co-host, suggested reaching out to him and Scott, noting, “We’re here because people showed up for us.”

Scott offered words of love and stressed the importance of community. “My prayer for anyone is that you find a community that supports you and affirms you.”

“Just Talk Live” is a weekly web series from Unbound, the online Christian social justice journal of the Advisory Committee on Social Witness Policy, and the Young Adult Volunteer program of PC(USA). Check out past episodes of the talk show on Unbound’s YouTube channel.