Several ministries in the Presbyterian Church (U.S.A.) have events planned for Pride Month in June 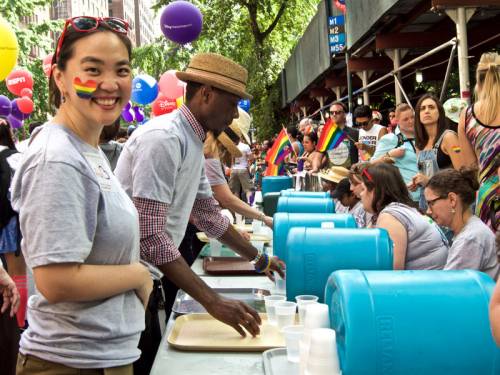 Members of First Presbyterian Church in the City of New York serve water to participants in the 2019 annual Heritage of Pride march. File photo

LEXINGTON, Ky. — The Rev. Shanea D. Leonard wants to start a conversation about the upcoming Pride Month defining what Pride is and what it means to them.

“Pride is something that is a time of celebration, resistance, action and awareness,” said Leonard, Associate for Gender & Racial Justice in the Presbyterian Office of Gender, Racial & Intercultural Justice. “It started out as resistance to bigotry against those in the queer community or LGBTQIA community, and it has morphed over the years to not only that we stand in resistance to hatred and bigotry, but we celebrate who we are, our rich culture as queer people and our resilience despite what happens around us.

Under Leonard’s watch, Pride is also something the Presbyterian Church (U.S.A.) is becoming more intentional about celebrating, putting together a calendar of PC(USA) Pride events (below). 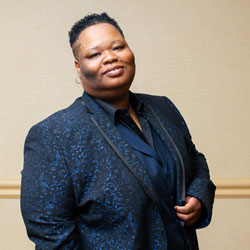 Leonard said it is “a time for us as a denomination to live into realities of statements we have made at General Assembly, and to celebrate those within our larger Presbyterian community who often feel marginalized in various ways.”

In addition to Leonard’s office, other ministries participating in Pride include Presbyterian Disaster Assistance, the Office of Public Witness, the Task Force for the Disparities of Black Women and Girls, the Advocacy Committee for Women’s Concerns and Unbound: An Interactive Journal of Christian Social Justice. Unbound, which is part of the Advisory Committee on Social Witness Policy, which produced a lot of Presbyterian policy regarding LGBTQIA+ issues, has created something of a Pride prelude with its Queering the Family series in collaboration with the grassroots group More Light Presbyterians. Additionally, More Light Presbyterians has several virtual activities that can be experienced as well, as they do each year. 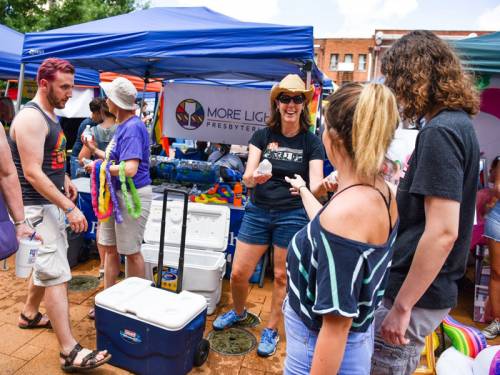 In addition to checking out virtual national church presentations, Leonard says churches can be part of the celebration and observance of Pride in their own communities.

But Pride is not confined to one month, particularly this year, when the COVID-19 pandemic has prompted many communities to postpone their Pride Festivals and similar celebrations, where churches can often have an important presence, to the fall. In addition, there are important days for the church to observe, Leonard says, including LGBTQIA History Month in October, National Coming Out Day on Oct. 11, Trans Day of Remembrance on Nov. 20 and World AIDS Day on Dec. 1.

While the fact of such broad observances of LGBTQIA+ Pride throughout the year represents tremendous progress, Leonard said there is a lot of concern about “the growing tension around anti-trans laws in this country that have been happening in various states. That is a growing concern, and something that we raised during Pride Month as well, because it seems almost as if our trans siblings are one of the last groups that it’s OK to discriminate against, even legally, and it’s not OK. And it is something that the Presbyterian Church has somewhat taken a stand against, in the sense that we have language out of GA that celebrates all genders. But it seems like it’s something that still our country is catching up with. Our collective struggle against oppression is something that cannot be denied.”

Last year’s celebration of Pride was muted as the world was in the grips of the still-emerging COVID-19 pandemic, and the start of the national reckoning with systemic racism following the murder of George Floyd by a Minneapolis police officer and other extrajudicial killings. While the pandemic has not fully abated, Leonard says there is a sense of relief as this Pride Month begins.

“Folks are excited to be outside and engage life with others outdoors again,” Leonard said. “Pride this month is becoming much more a celebration of who we are and being proud and taking not only just the stance of self-identity, but also this growing sense of we cannot be muted or be silenced.

“It’s a reflection of love and an appreciation for all of God’s humanity.”

All June: Show Your Pride Artistic Expression — Asking those who are out and allies to share photos of themselves in their most prideful way to be featured on our Facebook page for the entire month of June. Office of Gender & Racial Justice.

Through June 16: Queering the Family — Series of essays and Bible studies that aims to expand the definition of family and celebrate its many forms. Unbound and More Light.

June 10: Pride Panel — Discussion around all things pertinent to the community. Office of Gender & Racial Justice.

June 20: World Refugee Day — Churchwide recognition of refugees, including those fleeing due to persecution of LGBTQIA+ people. Presbyterian Disaster Assistance.

June 29: Webinar on The Equality Act — Education and information on this important piece of legislation. 3 p.m. Office of Public Witness.