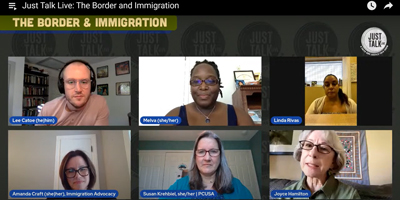 The border and immigration were the focus of Tuesday’s edition of Just Talk Live. (Screenshot)

LEXINGTON, Kentucky — Immigration attorney Linda Y. Rivas was accompanying a mother and her two children Tuesday who had finally secured entry into the United States under humanitarian parole.

At that moment, Rivas said, she had an overwhelming urge to protect the girl from all that she knew she is likely to experience being an immigrant in the United States — a place where many will view her and her family as an “other” and even criminal. Parole, after all, is a term associated with criminal justice.

Evidence of that was not far away, because at the same moment the mother and her daughters were being processed in, Border Patrol was expelling about 20 people, including women and very young children, under Title 42, which was invoked in March 2020 by the administration of former President Donald Trump in response to the COVID-19 pandemic. The 1944 statute authorizes officials to expel asylum seekers without due process due to health concerns.

“It’s just this is the reality: our borders are still closed, asylum is not respected, we are not welcoming with dignity,’” Rivas, Executive Director of Las Americas Immigrant Advocacy Center in El Paso, Texas, said Tuesday evening on “Just Talk Live.”

This week, the online Presbyterian talk show from Unbound: An Interactive Journal on Christian Social Justice focused on the current state of immigration with Rivas and Joyce Hamilton of Angry Tias and Abuelas of the Rio Grande Valley. They were joined by Susan Krehbiel, Catalyst for Refugees and Asylum for Presbyterian Disaster Assistance, and Amanda Craft, Manager for Advocacy in the Office of Immigration Issues in the Presbyterian Church (U.S.A.) Office of the General Assembly.

In the hour-long conversation, the four women painted a picture of the current state of immigration that is slightly better since the inauguration of President Joe Biden, but still fraught with dehumanizing, punitive policies and practices.

“The United States worldwide often has this legacy of welcome,” Craft said. “But the reality is we live with the legacy of white supremacy and xenophobia, and our immigration policies become the intersection of racist policies.

“We want to respond only through deterrence. There’s never a question about how do we welcome people at our borders in humane ways, looking at human dignity in a way that really provides an answer in response to the whole person as they arrive at our border, or those who have been within the United States for decades, who call the United States home.”

The conversation started less than an hour after a Minneapolis jury had delivered a verdict of guilty of all charges in the trial of former police officer Derek Chauvin for the murder of George Floyd. Hosts Lee Catoe and Melva Lowry started the episode asking the guests for their thoughts on the verdict, and they found it pretty easy to tie it back to immigration.

“One of the conversations that I think about with this trial is that … we’re saying, police are not the response to everything,” Krehbiel said. “You can’t send in the police for every little thing. And that’s the same conversation I think we have in immigration, that we invest in this punitive, hate-filled way of dealing with people instead of honoring their human dignity. And if we took that same investment and actually invested it into humanely welcoming them, it would be a completely different outcome for them.”

For Hamilton, that recalls moments she has seen at the bus station in Brownsville, Texas, where people who have been released from detention are brought to go to a new location.

“When the people are brought from the detention centers — usually it’s young adult males … — they’re in shackles,” Hamilton said. “And they’ve already been released. They’ve been freed. They’re already free people simply coming in a van or a bus over to the bus station, and yet they have to have their shackles removed after they get out of the van.

“There’s just something really wrong about that. And I think all the volunteers, the many, many volunteers that come and work with Team Brownsville, our partner group there, have commented on that and even broken into tears seeing it.”

One of the challenges of immigration advocacy, the panelists said, is that immigration opponents, particularly the Trump administration, have done an effective job of dehumanizing and even demonizing immigrants and refugees. The remain-in-Mexico policy of the Trump administration helped by placing asylum seekers across the border where fewer people in the United States could see them.

The reality, the panelists say, is most immigrants and asylum seekers are fleeing horrendous, even deadly situations in their own countries and see the United States as a land of hope. For many, that ends when they arrive. They find themselves faced with the might of the U.S. government and only churches, not-for-profit groups, and volunteers to stand with them.

Hamilton recalled a volunteer who came from a conservative church where there was a prevailing anti-immigration attitude.

“When she came back, and people started to say to her, ‘Why did you get mixed up with all of that border stuff,’ she said, ‘You look into those women’s eyes, and you tell them they’re not children of God,’” Hamilton said. “And she said that pretty much shut them up. But that’s what we need to do, right? We need to reclaim, we need to be able to look in each other’s eyes and reclaim the humanity that God’s created in each and every one of those families.”